In recent weeks publication of three related sets of data have confirmed the extraordinary nature of the ongoing changes in the economy and the broader social fabric of modern Ireland. Taken together, the latest Quarterly National Accounts, retail-sales and consumer-prices data; and the 2015 Edelman Trust Barometer paint a picture of a wide and growing disconnection between the real economy in Ireland and the official exports-led recovery propelled primarily by the tax-optimising multinational enterprises.

The same data also unmask the image of the torn social fabric within a polarised society.

Fourth-quarter (Q4) 2014 national accounts set off statistical fireworks and brought back memories of vintage champagne and the Fianna Fáil tent of yore. In 2014, the Irish economy officially clocked a massive 4.78 percent growth in real (inflation-adjusted) GDP, and 5.18 percent growth in GNP.

Our Final Domestic Demand (the sum of Personal Expenditure, Net Current Expenditure by the Government and Gross Domestic Fixed Capital Formation) rose for the first time since 2007 – up 2.94 percent or €3.947bn in real terms, year-on-year. The domestic economy, having shrunk for six years in a row seemed to have turned around in 2014.

The problem with the narrative of the resurgent Ireland is in the fine print of the numbers.

The good news from 2014 was that our personal expenditure did rise 1.14 percent, breaking three years of uninterrupted contraction. In 2014, Irish households raised their consumption by €936m to €82.733bn, matching 2006 levels of expenditure although still below 2011 levels and some €5.7bn short of the 2008 peak.

But the bulk of our domestic growth came from the investment side of the National Accounts. In 2014, our Gross Domestic Fixed Capital Formation rose 11.3 percent year-on-year, adding €2.98bn to the GDP and GNP aggregates and to Final Domestic Demand. The trouble is, based on commercial-real-estate transactions data for 2014, over €2bn of this increase came from the foreign investments in distressed Irish property, including NAMA sales. This ‘investment’ added no value to the economy, as vulture funds and distressed-asset investors tend to do no real work on the assets they buy, holding them to flip them back into the market as prices inflate.

Controlling for this ‘small statistical wrinkle’ puts Irish Domestic Demand growth at around 1.22 percent year-on-year. Not far off the EU average economic expansion recorded in 2014 and not much to be jubilant about.

So the National Accounts data reveal two Irelands: one of the booming vulture funds and some domestic investment vehicles, and another of relatively less dynamic domestic consumers and suppliers. 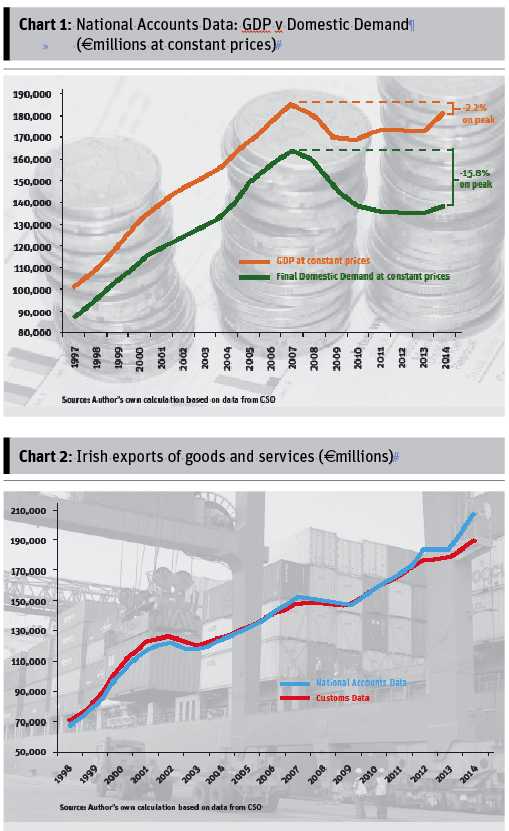 We record two trade statistics for goods in services: one via the National Accounts, and another via customs records. On average, over the 1998-2013 period, the two accounts differed for net exports/imports of goods by roughly €158m annually, with National Accounts marginally understating customs data. Over the years, this error ranged between an overstatement of €2.89bn (in 2007, on foot of booming imports of goods, in part driven by Celtic Tiger peak consumption) and an understatement of €4.39bn (in 2001, on foot of dramatic changes in the exporting economy driven by a shift from manufacturing to pharma-driven growth). In 2014, National Accounts-based net exports/imports of goods exceeded customs-recorded net exports by an unprecedented €10.28bn.

Factor payments abroad, representing returns earned by Multinational Companies on their activities booked in Ireland actually shrank in 2014 compared to 2013. The trade balance in services, containing the royalty payments to MNCs outside of Ireland that in part relate to trade in goods by the same MNCs here, has deteriorated by €6bn. Because of the aforementioned discrepancy we are left with at least €4.27bn of unexplained ‘net export’ increases.

This discrepancy counts in our GDP and GNP figures. The IMF, the CSO and the ESRI attribute this effect to ‘Contract Manufacturing’ schemes – a new tax optimisation fad that hit the Irish economy in 2014. Under this scheme, a multinational enterprise uses contractual arrangements with an Irish-domiciled company to manufacture goods (under the MNC licence) outside the country, but to bill value added from this manufacturing in Ireland. Goods, effectively made elsewhere, become ‘Irish-produced’ for accounting purposes, boosting the National Accounts statistics. But most of these goods do not even cross our border. So they go unregistered in the official trade statistics.

Put together the two factors driving growth mentioned above (distressed ‘value-added’ property investments and MNCs ‘Contract Manufacturing’), and take them out of the 2014 GDP and GNP aggregates. Adjusting for inflation, outflows of factor payments abroad and potential royalty payments on licences, the result is to shrink our 2014 economic growth from 4.78 percent to close to 1.26 percent for GDP and from 5.18 percent to 1 percent for GNP.

Not much growth on the streets yet

Let’s look at data from the ground: retail sales, consumer confidence and consumer prices. In December 2014, the Irish Harmonised Index of Consumer Prices (HICP) fell 0.3 percent year on year. This was followed by a decline of 0.4 percent in January and February 2015. You might think that our deflation is being driven by something exogenous, such as, for example, the deflating cost of energy. Indeed, the cost of transport services fell seven percent year-on-year in February. According to the CSO, in February, the most notable changes in prices included decreases in “…Clothing & Footwear (-3.0 percent), Food & Non-Alcoholic Beverages (-2.9 percent) and Furnishings, Household Equipment & Routine Household Maintenance (-2.7 percent)”. In the last three months, energy-related costs fell 8 percent. However,  Utilities and Local Charges rose 10.7 percent.

So, removing state-controlled sectors, prices remained effectively unchanged over the 3 months up to February 2015.

In other words, prices are not exactly screaming rising consumer demand.

And these data are fully corroborated by the retail sales statistics, also available up to February 2015. Over the last 12 months, the increase in volume for core retail sales was 4.5 percent and in value terms it was only 0.2 percent. Volume of retail sales increases were the highest in those sub-categories of sales that suffered the largest decreases in prices.

Meanwhile, consumer confidence indicator compiled by the ESRI keeps trending above pre-crisis averages, indicating strong willingness by consumers to spend, even though that willingness was much more subdued when it came to paying at the stores.

In simple terms, Ireland’s consumer boom is not driven by organic, real economic growth translating into higher disposable incomes, but by falling or static prices. After all the talk about increased wages, average weekly earnings in Q4 2014 were up just 2.3 percent year-on-year. Even this rise is questionable, as it reflects preliminary data – final data for the Q3 2014 average weekly earnings showed an annual decline of 1 percent in contrast to the preliminary estimate of a 0.8 percent drop.

Thus, deflation – the force that is, according to the logic of the Central Bank and mainstream economists, supposed to stall our demand for goods and services – is in fact helping to sustain consumer demand.

The glass is half…

The above numbers, as well as other statistics from the economy, have led to a bizarre scenario.

As mentioned above, the Consumer Confidence indicator is currently registering at almost double the average level for the boom-time period, ascending above the pre-crisis peak in both January and February this year. Marketing gurus and the media are proclaiming not only the end of the crisis, but ‘historic’ heights of growth.

For example, analysts from Amárach have declared that their “Economic Recovery Index has reached its highest level ever in …the March 2015 report”. Never mind that the index only started reporting data from April 2009. The fine print relating to this headline says that at “… the end of Q1 2015 our Economic Recovery Index shows a modest recovery in momentum after reaching a plateau in Q4 2014”. In other words, the “highest ever” index performance represents a ‘modest recovery’.

And the recovery is so modest, that only 17 percent of those surveyed agree that “the economic situation is getting better and showing clear signs of improvement” while 46% of respondents view this economy as being consistent with either getting worse or being bad but stable.

Meanwhile, the Edelman Trust Barometer 2015, published in late February, puts Ireland second lowest in the sample of 27 countries in terms of overall public trust in social and political elites.

Take a look at the evolution of various institutional trust sub-indices over 2014-2015 in Ireland (Table 1) and you will get the picture: we rank at the bottom of the overall trust distribution.

For a nation allegedly experiencing an economic renaissance, these are dire indicators.

The truth is that, courtesy of the structure of our economy – its high dependence on multinational corporations and relatively inefficient domestic sectors (both private and public) – we simply can get no idea of what is really going on from the headline growth figures. Meanwhile, data relating to domestic activity show some tangible recovery that is hardly worth the fables being written up about the Celtic Tiger resurgence.

The key, however, is not that the real growth remains relatively subdued, but that it is lack-lustre in year eight after the onset of the crisis.

Even helped by the emigration over the last six years, Irish real income per capita is still languishing at levels so low that we rank between second and  third worst in the euro area in terms of current income compared to the pre-crisis income peak.

And we rank at the top of the euro area in terms of total debt carried by this economy – private and public, combined – and in the rate at which this debt increased over the course of the crisis.

Given the depth of our collapse, normal economic theory and rational policy makers’ expectations would be for a bounce in domestic demand, incomes and real investment at least in low double digits.

That ‘normal’ is not happening so far, the fifth year into the officially-declared recovery, and 15 months into the reported flight of the Celtic Phoenix. •