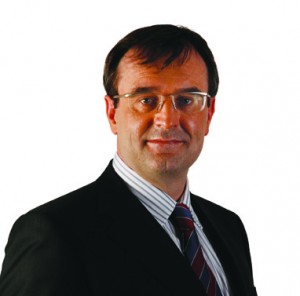 After a seven-month search by Fine Gael’s scrupulous Minister for Transport, Leo Varadkar, the appointment, over the becalmed Christmas period, of high-flyer Pádraig Ó Ríordáin to the role of chairman of the Dublin Airport Authority (DAA) generated some turbulence.

Ó Ríordáin is a partner – and former managing partner – in Arthur Cox Solicitors, Ireland’s biggest law firm. The former Harvard classmate of Barack Obama has, according to The Parchment magazine, “been on the fast track since day one” in the aggressive Earlsfort-Terrace-based firm founded in 1920 by Arthur Cox, solicitor, senator and philanthropist who died in Africa after becoming a priest.

Ó Ríordáin is a non-executive director of Paddy Power plc and TVC Holdings plc, and a member of the European Commission’s Insolvency Law Expert Group (ILEG), which seems to spend a lot of time dealing with the banking sector. He chaired the quietly-axed advisory forum on financial legislation (2007-9). He did well from the Fianna Fáil/Green government and no less well from its successors in Fine Gael/Labour.

Arthur Cox has been perceived as close to Fianna Fáil: at one stage the Irish Independent’s Sam Smyth even speculated that Brian Cowen might ultimately join Cox’s, headed by the then Taoiseach’s UCD-Law class-mate, Eugene McCague.

Eyebrows were raised towards the end of the FF/Green coalition, when Arthur Cox was awarded valuable legal work for the Health Services Executive (HSE) previously undertaken by the less well-connected Byrne Wallace Solicitors. A tendering process was used but it is believed that Byrne Wallace’s cheaper offering was spurned in favour of Arthur Cox’s.

McCague was and is a member of the board of the HSE, appointed by Mary Harney, though of course this had nothing to do with the award of the legal work in which he had no role.

Ó Ríordáin himself was a key advisor to the previous Fianna-Fáil-led-government during the financial crisis from 2008, though he has noted, “I had never met Brian Lenihan or Brian Cowen before I started working for the State. I’m not party-political at all”.

Ó Ríordáin was integral to Fianna Fáil’s financial policies. His citation for the exciting award of European Managing Partner of the Year 2009 singled him out “for his work advising the Irish State on its response to the banking crisis including the bank guarantee scheme, the nationalisation and recapitalisation of Anglo Irish Bank and the establishment of the National Asset Management Agency (NAMA)”. History does not record if his advices included any reference to any of these being almost treasonably bad ideas.

Ó Ríordáin was also the go-to advisor at the time of the EU/ECB/IMF bailout. The close relationship between Ó Ríordáin and the previous government was suggested at a conference of lawyers on the NAMA legislation shortly after its adoption. One of the speakers said to a rapturous audience that when Ó Riordáin was addressing the conference “he could hear the voice of Brian Lenihan”.

Arthur Cox was appointed government financial advisor in 2008 without a competitive tender at a marginally-discounted rate of €472 Euro per hour for partners (€100 per hour for trainee solicitors) on the basis the government considered an emergency response was required. Subsequently it won financial work by tender.

In 2010 Arthur Cox was engaged by the NTMA to draft the legislation creating NAMA after it submitted the lowest tender for the services. Nevertheless, some believe the work could have better been handled by the Chief State Solicitor’s office for example. At the time Arthur Cox commented, ‘‘Once NAMA is established, there is undoubtedly potential for conflicts of interest to arise for any firm working with NAMA in its transactions with banks and property owners. This is not what we have been appointed to do”.

The law firm was paid a further €1.25 million by the State’s National Pension Reserve Fund Commission for legal services relating to due diligence on Allied Irish Banks.

Law Society Regulations for solicitors state that ‘‘if a conflict of interest arises between two clients in a matter in which the firm is acting, the firm must cease to act for either client in that matter”. However, in exceptional circumstances, one of the clients may consent to the other client remaining. Arthur Cox claims to operate ‘Chinese Walls’ for such clients. Once the legal advisor to Anglo Irish Bank, Arthur Cox discontinued to provide legal services to Anglo when hired by the Government to advise on the Bank Guarantee. But it continues to advise Bank of Ireland, even though that makes it lawyer for the sellers of loans (Bank of Ireland) and for their purchasers (NAMA).

Of course government is not Cox’s only work: Ó Ríordáin is rather coy on Cox’s annual haul of fees, but The Lawyer magazine estimate came to €106 million in 2010 or €1.02 million per partner.

Another conflict arises for Arthur Cox over NAMA in its dealings with Treasury Holdings. It represents NAMA and Bank of Ireland; and the National Treasury Management Agency (NTMA) that set up NAMA and under whose aegis it still operates. And it represents the Department of Finance to which NAMA reports and which appoints its board. So, for example, Treasury’s acquisition of its vast Battersea site in 2006 was part funded by Bank of Ireland, whose loans were transferred to NAMA in 2010. Arthur Cox has represented Treasury and its affiliate, REO, and indeed Treasury’s bullish legal head, Rory Williams, formerly worked for Arthur Cox on the Treasury account.

It was Arthur Cox too which sent the infamous letters to the Centre for Public Inquiry (CPI) threatening it about the never-published report the CPI was drafting on conflicts of interest in the now-tainted Dublin Docklands Development Authority, conflicts between some of its board members – bankers Seán Fitzpatrick and Lar Bradshaw – and its role doling out planning permits to developers, many of whom banked with those board members’ Anglo Irish Bank. A letter from Arthur Cox to all CPI board members informed them they could lose their family homes and other assets if anything legally dubious to do with Treasury was published.

Personal liability was also threatened by Arthur Cox to directors of Lancefort when that Company challenged a Treasury development on Dublin’s College Green in the mid-1990s, despite the company being a separate legal entity from its members and directors.

Arthur Cox’s wide-ranging conflicts of interest have attracted the spleen of a wide range of commentators including solicitor Barry Lyons and celebrity economist David McWilliams, who said, “I am not a lawyer, but if I was looking at this country’s potential and I asked myself, have they learned from the crisis, have they changed. I’d see something like a huge law firm working for both sides as a worrying sign”.

Nonetheless, in Government, both Fine Gael and Labour have been happy for Ó Ríordáin to advise on further restructuring measures in the banking sector. He was responsible for legally implementing the €5 billion burden-sharing with subordinated debt holders through liability management exercises and application for a subordinated liability order. He also worked with the new Government on the recapitalisation of the banks during 2011.

Furthermore, Arthur Cox handled the examination of the books of Irish Nationwide and EBS Building Society; and the nationalisation of Anglo Irish Bank.

More recently, Ó Ríordáin’s appointment to the DAA resulted in questions being raised about a further potential conflict of interest given that Arthur Cox acts as a legal adviser to Aer Lingus, the DAA’s biggest airline customer. Ryanair predictably characterised the gig as a “crony appointment”. A spokesman for the department of transport said no such conflict exists as Mr Ó Ríordáin does not personally advise Aer Lingus and has not worked on that account for many years. The decision to appoint Ó Ríordáin as DAA chairman is again perhaps surprising, given Fine Gael’s previous disapproval of the almost Rasputinesque ubiquitousness, and price, of the advisory role Arthur Cox held with the previous Government.

The antagonism towards the appointment of white-shoe lawyer, Ó Ríordáin, has been exacerbated by his stance against a government-imposed salary cap on semi-state bosses. The high-rolling new DAA chairman has openly warned of the effect such a salary cap would have on the DAA’s ability to secure an effective, high-calibre chief executive to replace Declan Collier who earned over €500,000 in his last year there but has now left to become CEO of London City Airport (at a similar salary). Ó Ríordáin told a joint Oireachtas committee recently that in his personal view, a €250,000 cap wouldn’t enable the DAA to effectively compete for global aviation talent.

This purse-string liberalism contrasts with Ó Ríordáin’s view, offered somewhat gratuitously, it was felt, to the lawyers’ conference that there would “have to be social welfare cuts”.

Ó Ríordáin needs to find a solution to the DAA’s hefty pension deficit; negotiate the politically tricky issue of separation for Shannon and Cork airports from the DAA; and oversee growth in passenger numbers . Even Aer Lingus, which is more moderate in its language towards the State-owned airport manager, has described the increases in passenger fees of recent years at Dublin airport as “insane”. Ó Ríordáin certainly will not find his DAA remuneration of €31, 500 the easiest fee he has earned.

Dorothy Jones is an architect who lectures in UCD School of Architecture, including on NAMA