The only positive conclusion from the  immolation of Labour in Britain is that it was its leader and not its policies that forced the tragedy.

In late November pollsters YouGov asked the British public questions about the popularity of Labour’s manifesto, published earlier in the month.

The tax rises on the rich were very popular. The 50 per cent tax rate for earnings over £123,000 was supported by 64 per cent of voters, with just 20 per cent opposed and 16 per cent uncertain.

Jeremy Corbyn became a cult without stopping off to become understood, or clear.

For an accomplished politician he is an exceptionally bad communicator.  When he speaks, his sincere passions seem contrived, he emphasises the wrong part of key sentences and, worse, he does not even attempt to answer inconvenient questions, like what he thinks about Brexit, or what his stance on Israel and Anti-Semitism is.  He could have answered these questions plausibly but he seemed more interested in bristling.

Corbyn’s second-rate rhetoric failed to raise the great British public to the appropriate level of vitriol at the descent of politics into lies, base populism and wishful thinking. To convey that this was different from the Tories of yore. He did not appear to understand that Johnson and his gang are qualitatively worse even than Margaret Thatcher and hers, that Johnson  – puppeteered by the malign Dominic Cummings – like Trump, does not appear even to be a democrat. He failed to ram home a message of the scandal of the UK’s descent into a-morality and a-factuality.  He did not appear to understand the effects of manipulative and cynical populism. He did not appear to value evidence as the grounding for  ideology. He failed to rouse the UK into an obvious rage, against the charlatan Johnson.

However, Corbyn’s unforgiveable failure was not of presentation but of substance.  He failed to point out how bad it is for  a once decent country to fall for a liar and bigot like Johnson.  He failed to point out how bad Brexit will be for the UK’s economy; and for its society and environment. And he didn’t seem up for a robust and analytical debate in which he would explain the benefits of egalitarianism versus capitalism. His argumentation was typically dogmatic not open.

Brexit was not the cause of the Tory victory.  Brexit was the failure of the Labour party.

And as to the election catastrophe, blame neither policy nor Brexit.  Blame Jeremy Corbyn.  It’s in the anecdotes and it’s in the statistics. At all material times he’s always been less popular than his Tory opponent.

Never again must the Labour party put a leader with ratings of minus 50% into the fray. It’s inept to the point of being unethical.

And that is really the only lesson from a dark December in Albion. 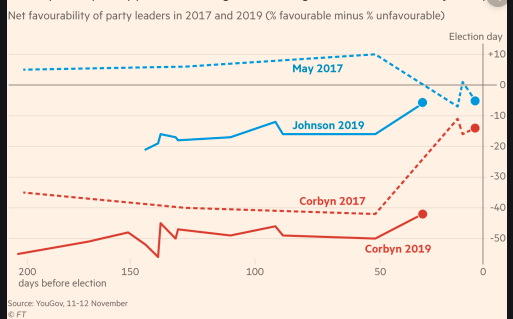