Going back to the land promotes sustainability and is living feminism 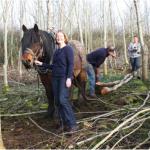 What do you think of when you consider farmers? Is it a macho guy smelling of pig shit and covered in engine oil? Our in-built expectations about gender keep women relatively under-paid and disempowered in Ireland. If you Google “woman farmer in Ireland” you may come across this gem on Boards.ie: “Not trying to sound bad but I’ve never heard of a woman farmer in Ireland. I know of plenty that help… but full-on farmers themselves would quite shock me”.

Environmental justice is an oft-neglected gloss on equality. Poor and disempowered people frequently have little say over access to and disposal of environmental goods such as clean water, fertile land, timber and other fuel for warmth and cooking; and often have disproportionate exposure to environmental bads such as poor air, unhealthy food-sources and urban blight. Meanwhile a powerful few have access to real decision-making about who controls natural assets such as minerals, land, beauty spots and water.

Ivana Bacik’s article in last month’s Village was a mainstream if perhaps unradical feminist history of the women’s movement in the Irish state from 1922 to present. It is important to remember and acknowledge the power of the female collective voice. However, living feminism means addressing the implicit ceilings, taboos and shibboleths of what women can or should do and can or should not do. The expectations about women and men’s roles are a constant source of frustration in this gendered and conservative society. Irish feminism has a long way to go.

Following a period working in construction – another traditionally male industry – three years ago I realised that primary production of food and timber is vital. Without food production by skilled and motivated farmers, finance, war, mining, forestry, advertising, even magazine production are impossible. The key to an efficient workforce is specialised food production and, in climates like Ireland’s, adequate, locally-produced heat.

It is not often recognised that women have a huge input into food production and farming worldwide – 43 percent of the world’s farmers are women and they produce most of the food consumed locally according to the FAO.  This is despite owning only between 10 and 20 percent of farms. Women farmers are also ignored by government assistance: female farmers receive only five percent of all agricultural extension (training and advice) services worldwide. So we have a situation where women farmers produce most of the real food eaten in the world, but men farmers tend to be more involved in food commodities, for instance the world grain market, where the money is.

Conscious of this, in 2010 I bought a 65-acre tillage farm with 15 acres of deciduous tree plantation. Recently I saved the second year’s grain harvest, and am selling the first timber harvest. The farm’s oak, ash, beech, sycamore and larch plantation is managed with two principles in mind: long term timber quality through sustainable timber production and forest biodiversity. I am immersed in the ritual of the farm’s seasonal turns – forestry and fencing in the winter, food and forage production in the summer.

There is no way to persuade a recession-stricken rural population to pay the full price it costs for the farm’s ecologically-sensitive firewood carefully hand-cut and horse-extracted. The going market-rate for firewood timber in rural areas, to urban dwellers would seem a pitifully small amount per ton of timber. This is the dilemma of primary producers (foresters or farmers) and the local market. However, rural people are starting to seek out sustainable and artisan forestry products – for firewood, fencing, charcoal and many other uses. Not only the quality of the timber is recognised, but also the knock-on benefits to the local community: employment of skilled foresters, chainsaw operatives, wood-workers and horse-loggers; and environmental benefits.

I believe that tough-minded nurturing can ground a modern feminism as an antidote to the slash-and-burn machismo of many Irish industries and professions. Sustainable farming benefits  consumers and is an outlet for practical and feminist egalitarianism.