Media need to look to the facts, not ideology
Richard O’Domhnaill
Tensions between the local community and the Shell-led gas consortium in north-west Mayo have considerably deepened following the sinking of the shellfish boat owned by Pat ‘the Chief’ O’Donnell in mid June. The sinking of his boat and the arrest of his son, Jonathan, as they exercised their historic rights to fish in Broadhaven Bay have removed a key obstacle in the company’s attempts to lay a pipeline from Glengad to the Corrib gas field.

Last summer, close observers of the controversy surrounding the proposed high pressure gas pipeline and terminal at Bellanaboy suspected that the withdrawal of the massive pipe-laying vessel, the Solitaire, was primarily influenced by a fear on Shell’s part that O’Donnell might be successful in a High Court application to protect his historic fishing rights.

Shell to Sea activist, Maura Harrington, was for a number of days also on hunger strike in protest at the presence of the ship in Irish waters before the sudden departure of the Solitaire last year although the company claimed that the pipe laying exercise was suspended due to technical problems. Many suspected that a court decision in favour of O’Donnell’s right to fish was a key consideration by Shell executives who feared that such a development could further delay by years an already seriously troubled project.

Now with the forced removal of the O’Donnell’s from the water, however temporarily, and relatively mild weather conditions over the coming weeks Shell is hoping that the pipes close to shoreline can be laid without too much further disruption by opponents of the project.

Pat O’Donnell and his son Jonathan have been arrested on a number of occasions and another of their boats seized since the shellfish boat Iona Isle was sunk on 11th June off Erris Head.

There has yet to be a decision by An Bord Pleanála following its recent oral hearings into Shell’s renewed application for a revised pipe line route during which significant health and safety issues, similar to those raised over the previously unacceptable route, were raised by a number of interested parties. (see Michael McGaughan article page?).

There has been some media speculation, fuelled by Shell advisors and spin doctors, that Pat O’Donnell may have sunk his own boat, and his livelihood, in the early hours of 11th June in order to gain sympathy for his position and of many others who want the proposed pipe line and terminal moved to a location where it does not threaten the health and safety of local people or the environment.

This notion is rejected by O’Donnell and his crew member in the lengthy and detailed interview with Miriam Cotton which is reported in these pages. Both men are adamant that the boat was sunk when four armed and masked men with Eastern European accents boarded the trawler and held them at gun point while releasing water into the vessel.

Similar allegations of attempted media manipulation by those opposed to Shell’s activities were made against local farmer, Willie Corduff, when he complained that he was beaten, again by masked men, after he emerged from under a truck where he was protesting against what he and others saw as Shell’s attempts to illegally fence off from the public an area at the Glengad landfall.

In the early hours of April 23rd Corduff claimed that he was attacked and beaten around the head and body at the Glengad site by men wielding batons or heavy rubber instruments and subsequently hospitalised. Among the commentators to question the veracity of Corduff’s account was Peter Murtagh who suggested in The Irish Times that the former member of the Rossport 5 – who was jailed for ninety days in 2005 – was making it all up.

Murtagh claimed that Corduff had not provided him with his hospital records which might substantiate his injury claims. The respected IT editorial executive did not record the fact that obtaining hospital records is not something that can be achieved within the deadline demands of a newspaper but can sometimes take weeks, as Village has learned. Witnesses including professional journalists who saw Corduff in hospital testified to his bruised condition as did a photograph published in The Irish Times on the day after the attack and s other photos published subsequently in Village magazine.

The hospital and ambulance service records obtained and paid for by Willie and Mary Corduff and furnished to Village are consistent with his account of how he sustained injuries which left him in Mayo General Hospital in Castlebar for twenty-four hours.

The diagnosis prepared by Mr Osama Elfaedy, the registrar to consultant surgeon Kevin Barry and sent to Corduff’s GP, Dr Brendan Molloy in Belmullet, records that Corduff suffered from bruising and had been kicked all over the body during an alleged assault at Glengad. Willie Corduff was suffering from kicks, headaches, nausea and vomiting upon his admission on 23 April. It also records that he had suffered a possible loss of consciousness. The hospital carried out a CT scan and X Rays on Corduff’s spine, chest and ankle where the bruising and pain were most pronounced. He also complained of pains to his legs and thigh. He was treated with pain reliefs and analgesia and advised to rest before his release from hospital on 24th April. Ambulance records note that Corduff complained of pains around his head and body when he was collected at Glengad and that he may have lost consciousness after he said he was beaten by masked security guards.

In early July, Amnesty International reported that Shell and other oil producers in the Niger delta in Nigeria were responsible for serious environmental pollution along the routes of its pipelines in the West African country. Communities had been ravaged by leaks and explosions devastating farmland and ruining the environment and the health and safety of local people over many years. Amnesty accepted that there had also been a campaign by militants against the activities of the oil producers and that people frequently tried to steal oil from the pipes which often resulted in fires and fatalities. But Amnesty insisted that Shell often wrongly blamed local objectors and militants for outrageous environmental and human destruction caused by the company’s operations.

In recent months and years there has been a sustained political and media campaign to demonise and criminalise a north Mayo community which has raised the most fundamental issues of health and safety, supported by a variety of credible and independent voices, which arise from the gas project and which affect their daily lives.

Pat O’Donnell and Willie Corduff have warned that there may be worse to come and that people’s lives, including theirs, are at risk. Perhaps it is time for the media to report more carefully what the people of Rossport have to say, and to forego the urging for spin and ideological distortion..

Shell’s controversial private security firm is Information Risk Management Solutions (IRMS), one of whose employees was Michael Dwyer, killed in controversial circumstances in Bolivia in April; and about some of whom Willie Corduff has alleged assault. The allegation is made that there is inadequate regulation of the private sector and of IRMS in particular. Certainly IRMS mployees nearly always fail to wear identity badges, though they may wear numbered bibs, in blatant breach of clear legislation and regulations. A letter, seen by Village magazine, from Jim McGlynn of the Enforcement Division of the statutory Private Security Authority (PSA) to Risteard O’Domhnaill, a Mayo-based journalist, dated 6 July says that “The provision in Section 30 of the Private Security Services Act, 2004 for the wearing of identity badges has not, to date, been brought into force.
However, the Private Security Authority has set the 1st September, 2009 as the date when wearing of identity badges becomes mandatory. Until Section 30 is brought into force, there is no legal requirement on security staff to wear an identity badge”. In fact Michael McDowell, as Minister for Justice, brought in Section 30 by Statutory Instrument on 29 March 2006 Mr McGlynn’s letter goes on “However, following discussions between the Private Security Authority and IRMS on this matter, a committment has been given by IRMS that the ID Badge policy would be implemented prior to it becoming mandatory”. This is all nonsense. The PSA has little enough to do. Cosy discussions with dodgy security firms is no substitute for applying the limited legislation that they are charged with enforcing. 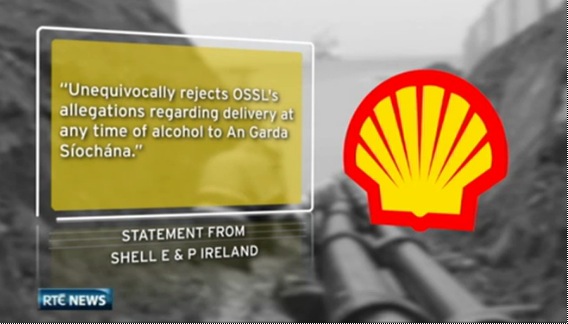