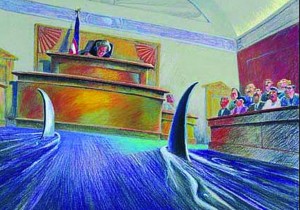 The Aarhus Convention aims to protect the environment and proclaims the public to be the best guardian of the environment. There are three strands to the convention: 1) Access to information; 2)Public participation; and 3) Access to justice to review environment-related decisions or to enforce environmental law.
Ireland was the last member of the EU to ratify Aarhus and became eligible for ‘Communications’ subsequent to October 2013. This delay comes from the apparent reluctance of the Irish government to deal with the issue of prohibitive legal costs.
The EU Commission prosecuted Ireland in 2007 for failing to comply with an Aarhus-related EU directive. The European Court of Justice (ECJ) ruled in 2009 that Ireland had failed to ensure that legal costs (relating to environmental legal actions) were not prohibitively expensive.
Special Costs Regime – Catch 22
Ireland responded by passing legislation in 2010, the effect of which was to alter the legal-costs rules from the prevailing English Rule (losing litigant pays winner’s costs) to the American Rule (each side pays their own costs) for legal actions that relate to an EU directive implementing certain Aarhus compliance measures.
Ostensibly, the special costs regime (SCR) means that a party could at least represent herself, without being threatened with a huge adverse legal costs bill, if she failed in her legal action. However, there is a Catch 22 in the SCR. To determine that a civil action falls under the ambit of the SCR, the applicant must risk an adverse legal costs award in making the application for such a declaration. This trap became stark in one case – an application by Dymphna Maher to the High Court in 2012.
Judge Hedigan in refusing the application effectively said that the Catch 22 arguably “acts in such a way as to nullify the State’s efforts to comply with its obligation to ensure that costs in certain planning matters are not prohibitive”.
The SCR can be scuppered if (i) the claim is frivolous or vexatious, (ii) the applicant conducts her litigation in a manner disapproved of by the court, or (iii) the applicant acts in contempt of court.
The second of these conditions introduces a huge level of fear due to the lack of clarity as to how this sanction might be implemented. The third item, “contempt of court”, also introduces uncertainty, as became evident in the European Court of Human Rights (ECHR) case of The Sunday Times v UK [1979] (the Thalidomide case). The UK introduced “contempt of court” legislation in 1981 giving clarity to the various offences encompassed, but Ireland did no such thing.
So Ireland’s attempt to comply with the 2009 ECJ decision against it, was to introduce a SCR with a Catch 22, plus other unpredictable adverse outcomes, any of which could leave an applicant with a life-ruinous legal bill. This hardly meets the ECJ’s demand that litigants be assured that costs are not prohibitive “with all the requisite clarity and precision”.
In any event, the American Rule should not be seen as a complete solution to the problem of prohibitive legal costs for the following reasons:
1.    An applicant may not always have the wherewithal to initiate legal proceedings as a lay litigant.
2.    Many environment-related legal actions inevitably fall under the ambit of EU law, which can result in a reference to the ECJ. The rules of procedure of the ECJ require that any applicant must be represented by a lawyer before the ECJ.
In these circumstances, an applicant must give consideration to the employment of a lawyer.
Own Lawyer’s fees
A litigant who hires a lawyer to represent her can be in a tricky position when she comes to deal with the legal bill issued by her lawyer, at the end of proceedings. If she receives a surprisingly high legal bill, she is left with two choices:
(a)    Complain to the Law Society. The outcome of this process is generally not published; so it fails to comply with the demands of Aarhus that “Each Party shall …. establish a clear, transparent and consistent framework to implement the provisions of this Convention.”   or
(b)    Avail of the Taxation process (or legal costs adjudication) for solicitor/own-client costs. However, this also lacks transparency and operates rules that are unfair to complainants:
(i)    Unless the complainant can show that she has been overcharged by at least one sixth, she must pay the ‘costs of the hearing’.
(ii)    The complainant must pay an 8% stamp duty, if she fails to prove she has been overcharged by one sixth.
(iii)    There is no published database of outcomes so that a complainant is blinded as to what is a fair fee of her lawyer, and is left more vulnerable to being ensnared by the one-sixth rule.
These rules illustrate the failure of government to bring in “a transparent framework” to constrain legal costs; arguably the most important demand of Aarhus. These pro-lawyer rules also violate “equality before the law” requirements as well as other human rights.
Equality under law is broken on two grounds: first, a client is treated differently to a solicitor in the matter of a contractual dispute. Second, solicitors are treated differently to other professionals, such as doctors or dentists in their contractual right to be paid professional fees. Dentists, for example, don’t enjoy the deterrent effect of a “one sixth rule” plus an 8% stamp duty on their fees. Dentists cannot overcharge with any degree of impunity. The US Supreme court ruled that imposing different legal rules on one party to litigation as opposed to another party, particularly on arbitrary grounds, violates the equal-protection clause of the US Constitution (GULF v ELLIS [1897]). 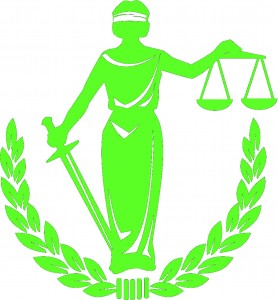 The “one-sixth” rule allows solicitors to overcharge clients  by about 17% with impunity (as costs of a hearing will likely be about 9% of adjudicated costs, plus 8% stamp duty), without any effective remedy – violating Article 13 ECHR in addition to Protocol 1 of the ECHR (relating to property rights).
The above hurdles breach the requirement under Aarhus to ensure that there are fair and effective judicial remedies. Imposing an 8% stamp duty on a litigant who seeks to challenge the high legal fees of her own lawyer, particularly in circumstances where it is adjudged that she has been overcharged, is a penalisation of her involvement in litigation, violating the Aarhus requirement that participants “shall not be penalized, persecuted or harassed in any way for their involvement”.
Lack of transparency
The government fails to allow the sunlight of public scrutiny to shine on the oppressive legal-costs system that prevails in Ireland. It does not publish the outcomes of legal-costs adjudications (a small number of cases excepted) and therefore makes it very difficult to do comparative analysis with legal costs in other countries – stifling advocacy for effective reforms.
While the amended Legal Services Bill (LSRB-2014) lifts the cloak of secrecy that applies to lawyer-own-client legal-costs adjudications somewhat compared to the original draft (LSRB-2011); transparency problems remain. Adjudicators will now have discretion to hold secret hearings, but are not mandated to publish compelling justifications for doing so. The current one-sixth rule (18.6%) threshold (applicable to lawyer-own-client disputes) is to be reduced to 15% (LSRB-2014 S.125(2)).
Interestingly, the government has backtracked on its original proposal (LSRB-2011 S.98) to extend this inequality to all legal costs adjudications. Online access to determinations is not envisaged (registers of determinations shall be available for inspection only). Further, there is no clarification as to whether published “determinations” include the costs of adjudication hearings.
The proposed redaction of clients’ names from published outcomes (LSRB-2014 S.107(5)c.) necessarily precludes linkage to the original case that gives rise to the dispute, thus hampering transparency in lawyer-own-client disputes. Transparency must extend to the costs of environment related court actions and requires that such cases be identifiable. This is necessary as, otherwise, it would be nearly impossible to assess whether the costs of procedures related to environmental matters are “not prohibitively expensive”.
Legislation purporting to implement Aarhus is strewn over various Acts making it near impossible for “officials…to provide guidance to the public”, as Aarhus demands. The government, by failing to implement effective reforms, is not “desiring to … encourage … participation in, decisions affecting the environment …” (from preamble of Aarhus). For those who have been following this is no surprise.•

The above is a summary of Kieran Fitzpatrick’s “communication” to the Aarhus Convention Compliance Committee in Geneva. Its admissibility is currently under review. The Committee’s findings are not legally binding, but its “recommendations” are often implemented by signatory countries. Alternatively, it can simply throw out a country for non-compliance.