Patsy McGarry of the Irish Times wrote an article in January referring to abortion zealotry:
‘Zealots on both sides prepare for battle over Eighth Amendment. Anti-abortion and pro-choice activists will create a bear pit ahead of referendum’.

The #RepealtheEighth Campaign tweeted saying he needed to be careful referring to people who were pro-choice as zealots. It accused him of being “shrill”. Its tweet got dozens of likes and retweets. But he’d carefully said no such thing and he had not been in any way intemperate. The Village account tweeted explaining this. Eventually #RepealtheEighth deleted the tweet.

Of course traditionally the pro-life lobby has been illiberal. For example the 2016 ‘Celebrate the Eighth’ rally was offensive since the progenitors of the 1983 Eighth amendment were incompetent and their wording was foolish and has proved dangerous to mothers.

But this salvo by #RepealtheEighth was another sign the pro-choice campaign lacks tolerance. Certainly it is fine to be intolerant of intolerance but in this instance McGarry was not being intolerant at all. McGarry seems to be pro-choice but he was calling for respect for the pro-life view.

This is part of a clear pattern on the part of ascendant pro-life activists . Una Mullally, a columnist also in the Irish Times, has written that people are asking: “How could Ireland allow same-sex marriage yet deny women the right to choose?”. That is banal. More blatantly she has declared: “Personally, I believe there is no ambiguity to what needs to be done”. There is.  Another article in that newspaper maintained that abortion is the “opposite of wrong”. That seems to be going too far though certainly it can often be that, for a particular person.

Village defers to no one in its pro-choice stance. We have consistently editorialised for abortion in the case of threats to the health or life of the mother, in the event of rape, incest or foetal abnormality. There is no point legislating against abortion in the first twelve weeks of pregnancy if abortion pills are available on the internet.

However, abortion is complicated. Against this background the hegemonic unassailability in the media of the pro-liberalisation voice is worrying. This voice is the ascendant one though the dominant media deny even this. To the extent that mainstream media review the quality of the coverage of abortion, they seem to be biased to the point of denial.

For example an article, again by Una Mullally, in the Irish Times under the heading: ‘Greetings from Ireland – the land of balance and crazy abortion laws’, which purported to seek fairness of coverage, claimed:
“Just as broadcasters made fools of themselves clambering for anti-gay rights opinions in the lead up to the marriage referendum, they continue to see voices that are pro-choice as things that need to be not listened to but opposed. What ‘balance’ is really about is censorship. Women get balanced. Gays get balanced. If only they’d stop talking about their rights. If only we could keep our fingers in our ears without hearing these horror stories. Balance. Help”.

Village has dealt elsewhere with the phenomenon that right-on agendas suppress the facts, choosing to apply the evidence to the opinion rather than the other way around. For example it does seem that media treatment of the tragic Savita Halappanavar case tended to overemphasise the role of the failure to provide an abortion in her death, where medical deficiencies seem to have been the actual immediate cause and failure to provide abortion a more general one.

Village promotes equality. It is a byproduct of that agenda that views that do not endear themselves to the editorial slant of the magazine, provided only that they are tenable, should get an occasional airing, even if fashion has deserted them, indeed especially if fashion has deserted them.
Typically such views are designated to contrast them with the views of the magazine – “counterpoint’, “contrariwise” etc.

Ironically, such is the liberal hegemony even right-wing and reactionary writers seem to feel they have a better chance of being published in Village than in mainstream newspapers. John Waters, Kevin Myers, George Hook have all been assailed and sidelined.

Now in one way a magazine like Village which favours fundamental change has to favour a hegemonic antipathy to reactionary views for only when tolerance becomes hegemonic will intolerance dissipate, and equality have a chance. On the other hand, however, freedom of expression and opinion is an important independent societal good. Village is acutely aware of the conflicting imperatives. Its reaction is to focus on at least ensuring that the facts, to which its and others ‘principles’ are applied, are fairly ascertained and presented.

Any theorist knows that you apply a theory to the facts. You must know the facts first. That goes for philosophy, law, science, history: every theoretical discipline. 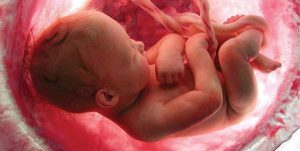 The problem in the case of abortion is that there is an unresolvable factual issue at its heart. It can never be resolved if the foetus is a human or perhaps more precisely if the foetus has enough of the qualities of a human to attract the benefit of human rights. When debating the issue of embryo research and assisted reproduction in the context of English law Dame Mary Warnock famously asserted that the likelihood of getting people to agree on the moral status of the embryo was non-existent. Accordingly she felt what was needed was an approach to the issue that allowed enough people to think things were ‘alright’ rather than establishing what was ‘right’.

Yet it is not clear that they have no rights. Indeed most, though not perhaps Amnesty International, would baulk at ever aborting an eight-month foetus. On the other hand only half of eggs that are fertilised actually implant themselves in the woman’s uterus. If the foetus is a human from conception/fertilisation then a vast sum of money and endeavour should be devoted to ensuring that each fertilised egg implants. This is impractical, ridiculous.

These polar phenomena suggest common sense is required. And it is impossible to stop a woman having an abortion, and an unjust infraction of the right of personal autonomy to force one sex to risk carrying foetuses to term if they do not wish to.

Practically, there must be a ‘liberal’ regime of abortion. But respect is due to those who consider this an abomination, even as their view, and the foetuses they champion, are necessarily disenfranchised.