In September, Elisabeth Moss twice used the word “fuck” as she accepted the best-actress Emmy for her role in the TV series ‘The Handmaid’s Tale’. As it was a live broadcast, the network (CBS) was using a time delay and so was able to bleep out the offending words. There were many reports online and on television in the hours and days that followed about the gaffe. None of them included the actual “fucks” as they were never broadcast, but then neither did practically all of the reporting outlets use the word either, opting for “f-bomb” or “f—” instead. Perhaps the attack on puritanism, which is at the heart of the show and the novel it is based on, is more necessary even than the liberal media establishment thinks.

And yet, was it a gaffe? Two other gestures by Moss on that night may cast some light on the matter. First, the soles of her shoes had the handwritten message “off” on one shoe and, presumably, “fuck” on the other. The credit for this is perhaps equally due to her stylist, Karla Welch, who displayed the sole of the “off” shoe on Instagram with this message: “You”ll have to guess what the other shoes says.… our note to the patriarchy #teamresistance”. This “fuck” goes unseen, just as the other went unheard, but the message is clear enough. The other notable gesture by Moss from the same ceremony is captured in a cheekily smiling photo of her holding two award statues with her right middle finger raised to the camera. This did the rounds on Instagram too, after Moss posted it on her own profile. 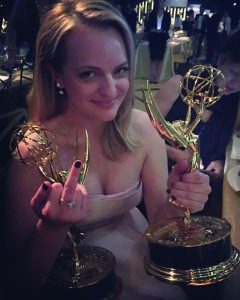 Those “fucks” seem a little less spontaneous now. And so what?, you may ask. The reason why this celebrity tittle-tattle is of interest is that Moss is a Scientologist, and her behaviour on the night was analysed by some commentators as being a deliberate Scientologist ploy. In a story that circulated in very similar versions on The Hollywood Reporter, Mashable, The New York Daily News and elsewhere, Moss’s speech is described as following the Scientologist practice of ‘going down the tone scale’ in public utterances, in order to make yourself more relatable to the average person. High-tone speech and behaviour are a turn-off, apparently, and Moss’s actions at the Emmys and various other on-camera bird-flipping incidents down the years are alleged to fit this kind of deceptive thinking.

So what is real, and what is acted, in her actions? It’s an interesting question because her profession is to act, and she is undoubtedly excellent in ‘The Handmaid’s Tale’, as she has been in the two seasons of ‘Top of the Lake’, and as she was for years in ‘Mad Men’.

In all of these, her major roles, Moss plays an obedient, or obedient-seeming, efficient performer of tasks expected of her, who occasionally and dramatically breaches the bounds that she ought to respect. These flashes are what keeps us interested in her. And they are the moments when we think we might be able to see the real actor, the common thread of her concerns working across various TV stories.

‘The Handmaid’s Tale’ is the story of women who live as sex slaves and are forced to be surrogate mothers in a misogynistic near-future America. The problem that the dystopian society faces with these ‘handmaids’ is that they are impossible to live without, as they are the only fertile women left, and they are impossible to live with, as the narrative makes clear. As a result, they are made visible and invisible. They cannot be imprisoned in some cage in the basement because their role in society is sacred and ceremonialised. So they are imprisoned in a fully public, open prison. They may not speak out of turn, they may not show their faces and they may not have any independent existence. They do not even have enough power over their own lives to be able to end them.

Their mode of speech and interacting with one another is a way of expressing this odd position. The costumes and the sexual politics, and the frontierism of a society under threat from an unnamed enemy, all point to puritanical America (and England). The characters must act a certain way with one another and speak in a highly coded manner. As part of their training for this new acting role in society, they are forced to publicly condemn each others’ previous lives in the abhorrent finishing school that is the segue between the end of their normal, pre-dystopia lives and the beginning of their lives as handmaids.

Much of the enjoyment of watching the characters in this show comes from trying to interpret whether this emotional labour that the women are performing is merely on the surface, or deeply felt. The distinction is that between what is known as shallow acting, which is the smile and bare minimum of eye contact you get at a burger restaurant, and deep acting, where people in service positions really align their inner beliefs with those of the organisations they work for. In ‘The Handmaid’s Tale’, we gradually realise that all of the handmaids are engaged in shallow acting, and this realisation has the force of making them seem to be liberated on the inside, and lends optimism to their plight, and opens up the possibility of a second season (which is on the way).

Many critics of Scientology, whose numbers are legion, have pointed out the irony that Moss is receiving accolades for her portrayal of a victim of a totalitarian cult. Viewing her in this light, and examining her actions and words on that Emmy night, are we confronted with the maniacal, glazed-eye, single-mindedness of the cult member, trapped inside a web of self-deceiving, selfimproving, self-belief that Scientology helps people be, as Moss herself has recently said, “a better you, not necessarily changing who you are”? 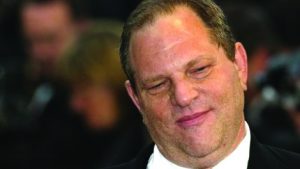 Is any of this important? Does it matter that it is Moss who delivers a powerful portrayal of a woman forced to bear children conceived in ritualised rape, when the Church of Scientology has been accused of forcing members to have abortions? Should we pose awkward questions such as these for any actor of religious conviction who plays a role that does not align with their religious organisation? Once you start to consider the religious convictions of many Hollywood A-listers, the anomalies and hypocrisies start to pile up pretty fast.

Finally, now that the Emmys have cancelled plans to give a lifetime achievement award to Kevin Spacey as accusations of predatory sexual behaviour are made against him, we ought to consider the hypocrisy that fuels the entire Hollywood machine. There have been rumours about Spacey for decades, just as the behaviour of Harvey Weinstein was widely known about and tolerated. The Emmys were prepared to give Spacey the award while his reputation was publicly clean, and they have changed their mind not because of new information, but because the existing information has undergone a category shift. The Emmys, in other words, were capable of some fairly drastic compartmentalisation, which is a skill that we enjoy contemplating in our favourite actors and for which we like to see them receive awards.

Cormac Deane lectures in film and television at the Institute of Art, Design and Technology.