The revised edition of ‘Francis Stuart: Artist and Outcast’ (Kiely, Liffey Press, Dublin 2007; Areopagitica, NC 2017) coincided this year with two other biographies about Nora O’Mara and John Lodwick, close friends of Stuart’s in wartime. The challenge for the biographer is to interrogate the sources about Stuart, O’Mara, and Lodwick each of whom was lured to a war zone, and establish the truth about their psychology, actions, personality and politics. Stuart and O’Mara became lovers while working for the Propaganda Ministry (Fichte Bund) in Berlin. Stuart’s notorious broadcasts made him, according to critic Cyril Connolly, “the Irish Haw-Haw”.

Lodwick, who worked for British Special Operations was a Croix de Guerre hero and novelist hailed by writers from Somerset-Maugham to Anthony Burgess.

O’Mara was in fact Phyllis Ursula James, born in 1918. Her natural father is unknown, her mother Nora James “a ladies maid of Hyde Park”. She was adopted by Sir Ian and Lady Hamilton of 1 Hyde Park Gardens, and despite a privileged education, including at a finishing school in Germany, suffered psychologically as an orphan. This is also attested to in ‘Black List, Section H.’ 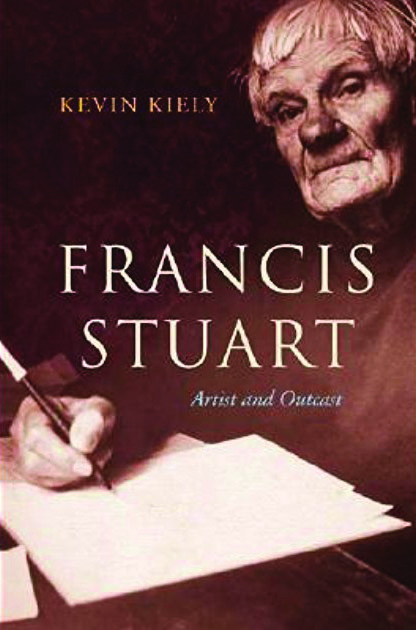 The Bundesarchiv-Militärarchiv in Freiburg holds a letter from the Nazi Propaganda Ministry of 12 March 1942: “Frau O’Mara is being sent for 14 days of convalescence to Baden-Baden”. The letter suggests finding “a decent theatre engagement…and to help Frau O’Mara in case of need; it is requested to appropriate 500 RM (Reichmarks) from the Goebbels Fund”.

The letter focuses on O’Mara’s status as an actress while working in the Haus des Rundfunk as a radio broadcaster alongside Stuart. O’Mara’s connections made her an insider with the Nazi regime. For example, Hitler’s personal pilot Hans Baur says he met her at a party in Goebbels’ villa in Schwanenwerder. The letter is intriguing as to how O’Mara penetrated the Reich’s higher echelons.

She features in Stuart’s ‘Black List, Section H’ (King Penguin) as Susan Loyson, a distressed mother trying to get into German movies and theatre. The tempestuous O’Mara-Stuart relationship is pervasive in the book: she had two children, as did he back in Ireland from a failed marriage to Maud Gonne’s daughter, Iseult.

While Stuart recanted his years in Berlin in interviews and especially ‘Black List, Section H,’ O’Mara’s loyalty to Nazism is clearly stated in two memoirs under the name Roísín Ní Mheara, ‘Cé hÍ Seo Amuigh’ (1992) and ‘I gCéin is I gCóngar’ (2006). The first caused a media scandal representing ‘neo-Nazism in Europe’ under the auspices of Gaelic-language publisher, Coiscéim. The government funders of the publisher had to answer for a text that evinced Holocaust denial like David Irving’s ‘Hitler’s War’ (1977). O’Mara’s overt anti-Semitism had first surfaced in January 1978 in her column in ‘Inniu’ denying the genocide in Bergen-Belsen. Her words are redolently vile: “there is plenty of evidence that the Germans did their serious best to solve the ‘Jewish problem’ humanely”.

Stuart and O’Mara were blacklisted for being friends of pro-Nazi IRA activists Sean Russell and Frank Ryan who retain nationalist hero status. Russell died aboard a German U-boat on a mission with Ryan to Ireland during the war. Stuart was imprisoned by the French but released after a year. O’Mara’s release shortly after her arrest in Paris at the request of the post-war American and British authorities is mysterious since “MI5’s file on her was made to go away”.

O’Mara’s foster-father, Sir Ian Hamilton, led the British Legion delegation in 1938 and was hosted by Hitler in Berchtesgaden, Obersalzberg. Making international news, Hamilton was photographed with Hitler as had other deviant foreign nationals including the runaway king Edward VIII.

The memoir states O’Mara was “born in Switzerland” but in 1938 O’Mara was listed in Berlin’s Reichstheaterkammer Jahrbuch having established her identity as ‘Irish’. Her background and lineage were fake in a milieu where the bogus Nazi obsession with Aryanism and Jewishness in particular led to many reinventions of identity. The Abwehr, the SS, and the Geheime Staatspolizei sanctioned her profile as ‘Irish’, and her shadowy activities.

O’Mara appears in John Francis O’Reilly’s ‘I Was A Spy in Ireland.’ He believed her cover-story. She was “Irish looking with unusual blue eyes and a peculiar walk as if she had at one time injured her back. Good-looking, but with rather an unwashed appearance”. 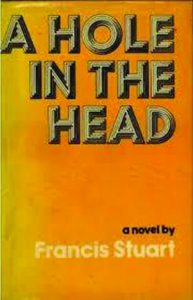 O’Mara was obviously a spy for the Germans among their ‘adopted’ Irish gang of anti-British, pro-IRA supporters residing in Berlin and on the payroll. They included Stuart. William Warnock, the Irish chargé d’affaires in Berlin put on the record that O’Mara “was responsible for a raid by the SS on fellow broadcaster Liam Mullally’s flat”. The fact that she was quickly declassified by MI5 and the Americans after the war points perhaps to some sort of double-agent status.

Francis Stuart’s novels had been highly praised, notably by Yeats who lost out in the tug-of-love with Iseult Gonne who married Stuart. Yeats’ proposed to Iseult twice but was blankly refused and he moved on speedily to marry Georgette Hyde-Lees. Yeats admired Stuart as poet and novelist, stating “he will be our great writer”.

Stuart had returned to Berlin in January 1940 on a cultural visit organised by German Academic Exchange’s Helmut Clissmann (later assigned to the SS). This gets much space in ‘Black List, Section H.’ It has the highest political resonance in the novel since he acknowledges “being branded as a Nazi by those from whom most of his readers would have to come, scarcely augured well for his future”. 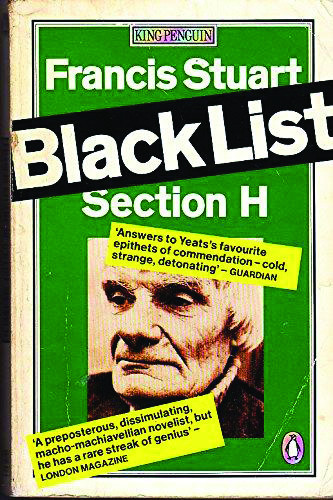 Stuart’s Berlin years achieved everything he wanted for his art, albeit at the price of infamy. His twenty-five novels present a unity of thematic structure about war and its reality as counter-flow to so-called peace time. The extremes of Nazi Germany fulfilled his personal and psychological needs. The politics of national-socialism was a different phenomenon which he criticised in the postwar novels ‘Redemption’ and ‘The Pillar of Cloud.’ Stuart sued and won his libel case against the Irish Times when Kevin Myers claimed his writings exhibited anti-Semitism.

Collaboration was the devil’s pact made by Stuart and O’Mara who were attracted by Hitler’s Third Reich, imperial power, the wartime atmosphere and Bohemia in line with National Socialism’s totalitarian racism and genocide. It is a psychology that both biographies articulate.

In 1940, O’Mara was hired by Dr Kurt Haller to work for German Intelligence (the Abwehr) at a salary of 400 Reichmarks and was introduced to Stuart, by then a lecturer in Literature at Berlin University, soon to work at the Irland Redaktion.

O’Mara was also teaching English for Abwehr, primarily to Hermann Görtz, the secret agent sent to Ireland and later jailed. Other agents included Ernst WeberDrohl and Henry Obed. Many settled in postwar Ireland along with Clissmann, founder of St Killian’s German School.

Like Roger Casement’s, Stuart’s and O’Mara’s antiBritish position evolved. In 1941 they went recruiting captured Allied soldiers and airmen for a German ‘Irish Legion’ which was a failure.

According to her memoir, she “escaped” from Berlin in March 1945 by squeezing through a train window with Nadejda, her four-year old daughter, and returned to post-war Germany. She was a member of the German Guild of Actors until 1955 and produced Beckett’s ‘Fin de Partie’ in Munich (1958).

Stuart’s return to Berlin in January 1940 with false declarations of bad health supposedly en route to a Swiss clinic, was in fact as a liaison for the IRA with a letter of recommendation from German Ambassador Hempel.

Görtz parachuted into Ireland arriving at Laragh Castle and hiding out with Stuart’s wife, Iseult. He evaded capture for over a year aided by Maud Gonne and staunch IRA man, Jim O’Donovan who masterminded the bombing campaign in England during WWII. Hitler, long before the Battle of Britain had drawn up contingency plans for an Irish Invasion on Lough Foyle and the Erne, known as ‘Plan Kathleen’ under advice from Sean Russell, the 1916 hero covertly brought to Berlin from the United States, and joined by Frank Ryan whose escape from Burgos Prison under Franco was organised by both Abwehr and the Spanish Fascist Government.

Stuart and O’Mara harboured paternal grief, his father committed suicide; she never knew her father. Their mutual attraction in a war-torn city coupled with danger, death and destruction reflected their ‘borderline’ personality type as well as the desire to be in the Nazi war zone. Such borderline toxicity is prevalent in some of Stuart’s twenty-five novels, the major ones thematically exploring ‘wartime people’ including ‘A Hole in the Head’ and ‘Memorial’ set in Belfast during the Troubles (1969- 1998). As outlined in ‘Black List, Section H’ O’Mara moved on to other affairs but never found a lifelong partner. Madeleine (Gertrud) Meissner, a Polish literature student in Berlin and translator at the Rundfunkhaus, formed a relationship with Stuart that lasted over many decades and in Ireland where they resettled in 1960. 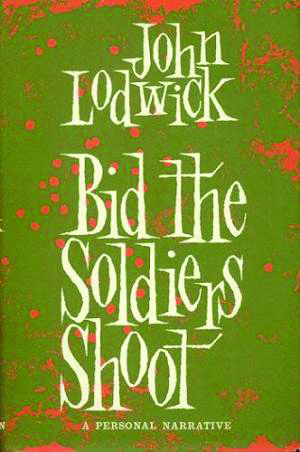 Significantly, after the war living with Meissner Stuart found his closest friend in John Lodwick as outlined in ‘Francis Stuart: Artist and Outcast’ and amplified in Geoffrey Elliot’s biography ‘A Forgotten Man: The Life and Death of John Lodwick’ (I. B. Taurus, London 2017). Lodwick had more than nine lives as Special Operations Executive, eight times parachuted into occupied France, twice into Crete, escaping from a POW camp in Greece and immersed in undercover operations in Serbia and Bulgaria. Lodwick was identified in SOE training as having “moral integrity 0%…tactless, selfish, fearless …a heavy drinker”. The designation also fits Stuart and O’Mara. Anthony Burgess praised Lodwick for “his mastery of the English language [that] matches that of Evelyn Waugh”. That Stuart had worked for the Nazis did not subvert their intensely close friendship, both dedicating books to each other. Stuart’s epigraph to ‘Black List Section H’ is “in memory of John Lodwick dearest of Friends”. ‘Bid the Soldiers Shoot’ (1958) depicts Lodwick’s wartime exploits and according to Elliott demands re-issuing.

Both Lodwick and Stuart had three marriages, and both worshipped Dostoevsky. They had Irish mothers in common, Lodwick’s from Limerick. He absorbed Catholicism from her. Stuart became a Catholic at the age of 17 to marry into the Gonne dynasty. Both hated their English public schools; Stuart was sent to Rugby, Lodwick to Cheltenham College. Both had British military ancestors just like O’Mara’s foster father, Hamilton. The love of Lodwick’s life was the alcoholic Surrealist poet, Sheila Legge, born in Cornwall. Who is known for her poem ‘I Have Done My Best For You’ and whose death a decade before his was foreshadowed in his gun running and drug dealing along the Mediterranean. This recklessness is shared with O’Mara and Stuart. Lodwick grew away from England, settling in Spain, despite his publishing history with Heinemann, just as Stuart hated his Northern Loyalist background, becoming a first-wave IRA gunman supporting De Valera.

In 1959, Lodwick was killed while avoiding a cart in his Alfa Romeo, sixty miles from Barcelona en route to a Catalan folk festival.

Criminality was an element of all three: O’Mara, Lodwick, and Stuart. All were adventurers, drifters and writers in search of war. O’Mara wrote two books on Irish Saints, and in 1985 translated into German the Gaelic Epic of a mentally unbalanced poet, ‘Buile Shuibhne’ (Mad Sweeney). She cultivated long-term cultural associations with her adopted country. Her advisor on the poetry translation was Tomás, later, Cardinal, Ó Fiach. The real mystery is that despite the Holocaust, and her heinous denial of it, O’Mara’s childhood trauma as an orphan turned her against her foster parents and against Britain. She emerged pro-German with an identity in Ireland through her vision of the country as orphaned by its turbulent history. Lodwick held to some sort of Catholicism, despite his wartime record and individualism as a novelist. Stuart’s infamy remains balanced by an artistic reputation that embraces the tradition of recanted criminality.

The delinquency is fully admitted and articulated in ‘Black List, Section H’ and his later novels.