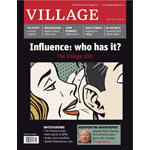 The new issue of Village Magazine (April 2012) is in shops from Saturday 24th March. This is a 96-page issue, including an 18-page special on the Mahon Tribunal report, with analysis by Frank Connolly, Michael Smith, Elaine Byrne, John Gormley and others.

Also in this issue: the Village list of Ireland’s 100 Most Influential; how the Garda Ombudsman misled the public over the ‘rape tape’; Michael Smith on Johnny Ronan and Richard Barrett;  Oisín Quinn and SIPO; Niall Crowley on the treaty referendum; John Gibbons; Harry Browne; Constantin Gurdgiev.