Arlene Foster, Leader of the DUP, has a rich and ancient Gaelic heritage with a family tree dominated by two august Irish surnames – Doonan and Kelly. Her more distant ancestors, who spoke Gaelic, would have considered themselves part of the Ó Dúnáin and Ó Ceallagh clans, not Doonans or Kellys. Her family tree also demonstrates how the overwhelming majority of her ancestors lived and died in the Barony of Clankelly in Fermanagh.

The Irish language act has amounted to an impasse which continues to be a stumbling block to the reinstatement of the Northern Executive and Assembly at Stormont. To her credit, Foster has shown leadership on the issue. At the launch of the DUP’s Westminster general election manifesto she declared: “The Irish language has been made a key block by Sinn Féin. I would regret that because I do think there is a way forward through those issues, because there are those in Northern Ireland who love the Irish language.”

Arlene’s Doonan connection is fascinating. Doonan or Ó Dúnáin is a rare name in Ireland. According to the leading authority on Irish names, The Surnames of Ireland, by Edward MacLysaght, the Doonans of Fermanagh were ‘Erenagh’, or hereditary stewards and guardians of Roman Catholic church lands. In old Irish they were known as ‘airchinnech’. The translation is ‘head of an ecclesiastical settlement’.

Hereditary stewards and guardians were nominated by the local Catholic Bishop.

The Plantation of Ulster in 1609 saw the Doonans completely dispossessed by the English.

The Roman Catholic church was taken over and the congregation was denied the right to worship.

The Doonans never recovered their earlier status, yet the family still survives in Fermanagh as Arlene’s family tree demonstrates. Further research is required to pinpoint when the Ó Dúnáin branch in Foster’s family tree converted to Protestantism.

According to MacLysaght, the surname Kelly (Ó Ceallagh) is the second most populous name in Ireland. It is not certain where the name hails, however the most probable suggestion is that is comes the word ceallach, meaning ‘strife’ in the Irish language.

The Barony of Clankelly (from the Irish: Clann Cheallaigh meaning ‘Clan Kelly’) is in Co. Fermanagh. Clankelly takes its name from Cellach, son of Tuathal, a king of the Ui Chremthainn who was killed in 731. The ruling family of Clann Cheallaigh in the late medieval period bore the surname MacDomhnaill – from Domhnall, a grandson of Cellach, whose death is recorded in the year 791.

Further research is also required to pinpoint when the Ó Ceallagh line in Foster’s family tree converted to Protestantism.

Whilst the documented evidence traces the roots of the Kelly branch of Arlene’s family back to the early 19th century, the surnames involved establish that the roots indeed go much deeper and their respective links to the history and culture of Gaelic Ireland is well documented.

Her grandparents on her father’s side were Nathaniel Kelly (born 1881), a farmer, and Alice Jane Doonan. They married in 1924 in St. Mark’s Church of Ireland Parish of Aghadrumsee and lived in Derawilt, County Fermanagh. This townland is in the Civil parish of Clones and the Barony of Clankelly.

Her great grandparents were John Kelly (6 May 1851) and Alice Doonan who were married in the Church of Ireland Parish of Clones on 18 May 1873. The marriage confirms that John’s father was also a John Kelly while Alice was the daughter of Nathaniel Doonan of Drummans, Clones, County Fermanagh.

Her great-great grandfather was yet another John Kelly who married Sarah Ferguson on 4 December 1846 in St. Mark’s Church of Ireland Parish Aghadrumsee. This marriage record did not note the father’s names only to say that both were deceased. However, it confirmed that John Kelly was living in the townland of Drummaw in the civil parish of Galloon, also in the Barony of Clankelly. The townland is not far from Derawilt where the family ultimately moved. The land in Derawilt came into the possession of the Kelly family in 1892 when John Kelly took over the 47-acre plot from a John Richardson. He bought the land outright under the Land Act Purchase in 1908. 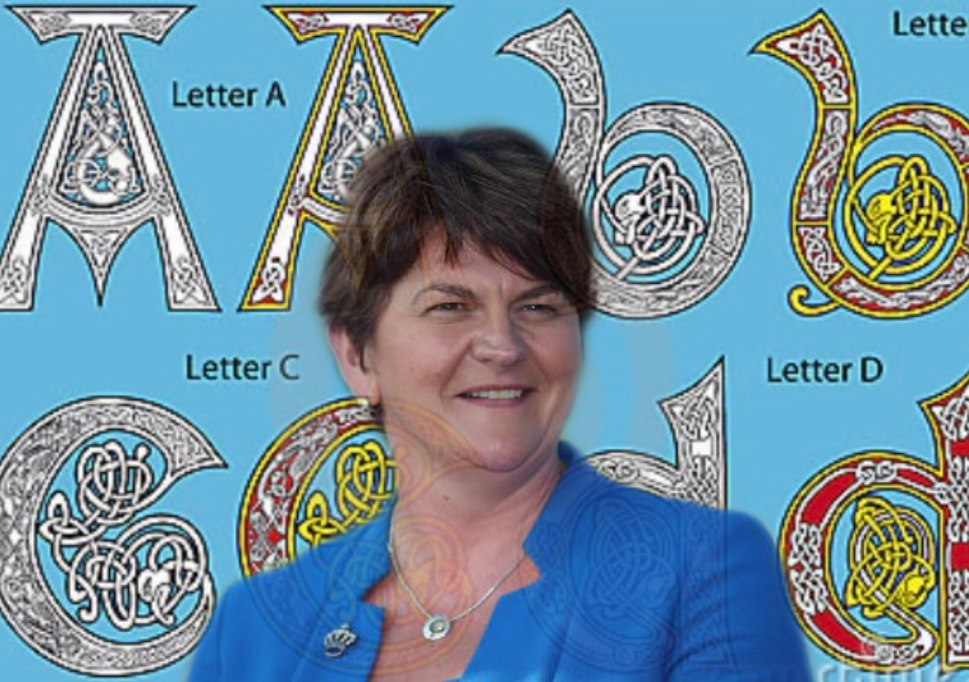 Great-great-grandmother Alice Doonan was born circa 1843 to Nathaniel Doonan and Eleanor. Eleanor’s maiden name is unknown. Her father, Nathaniel, was born in 1812 to James Doonan and Jane Moore. Sadly, her mother, Eleanor, died prematurely in 1849 and Nathaniel married again, to Jane Forster in 1850 and went onto have a second family. One of his sons from this marriage, John Doonan, was the father of Alice Jane Doonan (mother of John William Kelly, Arlene’s father).

While Arlene Foster may not speak Irish herself, it is surely lurking in her DNA. Perhaps she can now navigate her way through the Irish language act impasse at Stormont and make her ancestors proud of her nonetheless.