‘the Journey of Light is drab, unimaginative, insensitive,  visionless – and grandiose’

In late September, An Bord Pleanála heard appeals against the decision
by Dublin City Council to give permission to the Office of Public
Works for the €500,000 ‘Journey of Light’ memorial – to the victims of residential  abuse.  It will be  a covered passageway, lit at night and flanked by fossilised limestone walls and
waterfalls running through Oisín Kelly’s Children of Lir
monument commemorating the 1916 Rising in the Garden Of Remembrance,
Parnell Square in Dublin. A
memorial was a recommendation of the Ryan report, after generations  of abuse and decades of inquiries into child abuse including the Ferns report, the
Murphy report, the Cloyne report, the Raphoe report, and  the Dublin
Dioceses report.
The hearing was extremely intense at times, hostile and defensive. It
seemed to me as an observer and objector that the case for going ahead with this memorial was rather heavy-handed and oppressive. This was not a holistic process designed to give healing and create reconciliation.  It was evident that no real consideration had been given to the impact  and  integration of what can only be described as an entrance tunnel to the hallowed Garden of Remembrance.
Multiple theoretical and visual aesthetic concerns were ventilated. For me the Journey of Light is drab, unimaginative, insensitive,  visionless – and grandiose. Independent TD, Maureen O’Sullivan maintained: “It is demeaning to the survivors not to give them their own space but to ask them to share with a memorial that is celebratory. And it is demeaning to those who fought for the principles of democracy, our independence, to ask them to share with this dark chapter of abuse”. Will soldiers at future  state occasions  have  to turn  their backs to  this  memorial?
The Irish Georgian Society objected to the effect the proposal would
have on the surrounding historic eighteenth-century square, and to the
interventions in the garden. Parnell Square should eventually be reimagined with the  feel of a park. An Environmental Impact Statement would have been useful and should probably have  been required, legally.   Statements were also given by historian Tim Pat Coogan and
John Connolly, grand nephew of James, against the proposal .

The City Council was somewhat confused in its evidence. It had granted the permission despite a motion passed unanimously by all Councillors in December 2012, to make the site a
protected structure.

The ethical problem which sweeps aesthetic concerns in its path here
is that there have in fact been no serious consequences for the individual
perpetrators of the  residential abuse being memorialised. Or for the congregations of religious or the Irish Catholic Church or indeed the state departments that were involved in joint
ventures in this diabolical delinquency, and which then indemnified the
religious.

Yet now the co-accused, the State as oppressor, is proposing this ill
conceived, premature, insulting and unwanted gesture.

Justice Seán Ryan in the Ryan report ensured in his recommendation
that the then Taoiseach’s apology should be enshrined in any memorial
expression. So the words of Bertie Ahern, a man who serially betrayed us all, are to be
enshrined forever more on this state memorial that is supposed to heal
us and acknowledge our suffering.
This is a grandiose gesture from a bankrupt state. An
unnecessary spend of money. A contempt to those children who are
homeless on our streets this very day, who are still dying in our
State care system. Who are unprotected and unsafe in their own homes. This state indifference is itself an abuse.

There is a potential conflict of interest insofar as the Minister for
Education, the department that is making the application for the
memorial, appointed two of the memorial committee members to the
Residential Institutions Statutory Fund (RISF).
The memorial omits  mention of the Magdalene women,  the mother and baby homes, the banished babies, the Bethany home, the mental institutions: Grangegorman, Ballinasloe, and the Midlands.
History here is being presented and created by the State, by a conspiracy of the OPW, the besmirched Department of Education  and Dublin  City Council, as the
triumphant victor over oppression: the rescuer. In fact  this is a grab by the
state, a monumental memorial cover-up by a co-accused that has evaded
any accountability to this day. Beware of the state bearing monuments.

We place great faith in the independence of An Bord Pleanála and
believe it will reject this proposal in its entirety on planning
grounds. But more importantly on ethical and moral grounds, on the
grounds of contempt to the very idea of what memorial and monument can
be and as further injury to the wounds of the many who are unfortunate
enough to have been selected for incarceration in the regimes of state-run residential institutions that contained and brutalised those of us that were deemed surplus to need.

As James Young wrote about the Holocaust, “once we assign monumental
form to memory, we have to some degree divested ourselves of the
obligation to remember”.

Memorials are about the past and the issues of physical, emotional and
sexual abuse in Irish institutions are not yet historical. 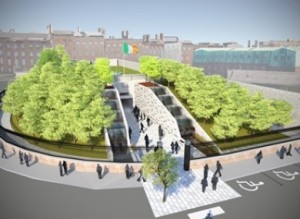