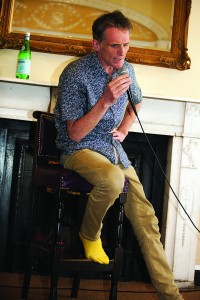 Kevin Barrington has lived dangerously.  He spent most of the 1990s working as a freelance war correspondent in Cambodia, for the UN in the Congo and the Ivory Coast before a love interest took him to Hollywood and a job in the advertising industry. Now back in Dublin – a place he finds far too small and incestuous, but a safe haven – he’s learnt when he needs to take cover.

Kevin is a wounded greyhound. He is fighting illness and has been undergoing harrowing medical treatment for the last year. Finding himself temporarily unable to travel abroad, he now escapes, by blogging and writing poetry, to a place where he finds he can run free and fast.  He recently ran in to some trouble with the ridiculous Declan Ganley who sued after Barrington had conducted a long-term campaign questioning his honesty and mandate. Barrington was divested of a nominal sum in one of the first cases of defamatory tweetings.

He describes himself as a reporter and his poems as a medium for reporting the internalised human condition. There are stories of love, art, addiction, illness, friendship and politics in this collection of fifteen poems. He calls each poem a circus act with an edge and he is the ringmaster. He plays with language and his poems are crafted for oral impact, with the punch of an expert copywriter and wordsmith. There’s an awkward, anarchic brilliance here, filtered through his characteristic unfailingly-friendly ‘come hear ‘til I tell you’ nature.

There’s an awkward, anarchic brilliance here, filtered through his characteristic unfailingly-friendly come hear ’til I tell you nature

This book is dedicated to Kevin’s sister Eileen who he describes as a “dote’’. Eileen and her family provide Kevin with the space, shelter and peace he needs while he is replenishing his energy before getting back into the field. His young niece and nephew have influenced the playful tone of many of his poems. Kevin’s own intellectual agility was nurtured early, growing up in Monkstown in an environment of challenging sibling ‘intellectual sparring’. There is no end to the achievements of his family; and no space to go into them.

Kevin’s philosophy is simple: it’s about respect. He believes in taking no more than your fair share from this planet and society. Capitalism he says once had its place, now it is the very few destroying the planet for the many.  He says that what we dismiss as inefficiencies, like once waiting three years for a telephone to be installed, did perhaps actually spread real gain to others. He says it is time for assertiveness with current forms of commerce. It is not good enough to be promised jobs as a short-term gain when the cost to the future is too high:

“What is the price to social services when the Irish government permits a 2% corporate tax to be paid in exchange for a handful of jobs? Our politicians are too impressed by the Googles and Apples of this world.  Johnny public is not winning. These companies are all about image.  We need to use their image against them and shame them into paying their fair share of tax’’.

The title poem of this volume is central to Kevin’s political position and vision. He loves the internet “Cos it’s ours’’. He wrote this poem in response to the recent Oireachtas Communications committee session on Social Media which he says was a “witch-burning session”. His view is “stifle the internet and you stifle the only means of defence there is left’’. Barrington  says control of social media is an attempt to disenable dissent and the freedom made possible by telecommunications. He recognises that social media are open to the type of abuse and “bawdy bullshit’’ that is inherent in human nature, acknowledging that ‘’Twitter lends itself to abuse like the telephone lends itself to gossip’’.

The Internet is a thing of beauty and wonder – it is journalism by the people for the people.  He talks about the Internet at its best being a form of “journalistic rugby”, where a story is skilfully and gracefully passed and spun from one writer to the next as natural momentum advances knowledge and wisdom.

The digital revolution is the Great Leveller – with the capacity to invert democracy and the vertical structure of society by making “access to knowledge horizontal”. He refers to the leaderless Occupy movement as part of the same global movement of levelling.

The book itself is a manifestation of Barrington’s idealism and vision. Many of the edgy contemporary illustrations were commissioned for his poems. The transnational publication team and illustrators were “crowd sourced” through ‘Political World’ online discussion forum.

President Hoover commented of America during the height of the Depression: “What this country really needs is a great poem. Something to lift people out of fear and selfishness”. Ireland is in desperate need of an original and inspiring poem right now and Kevin Barrington could be the one writing it.

‘I love the Internet’ by Kevin Barrington can be bought online with an audio option for €5 @ www.itsapoeticalworld.com.