The UK’s withdrawal from the EU is far less relevant on the continent of Europe than it is assumed to be here in Ireland. I visited Berlin just before the recent Federal Election and it provided a timely antidote to the obsession with Brexit in Ireland.

The further east, south and north you go in Europe, the less relevant it becomes. In recent elections across Europe it has not been a pressing issue. The two candidates for the German Chancellorship had a ninety-minute debate, with no mention of Brexit. The final two candidates for the French Presidency debated for two and a half hours, with no mention of Brexit.

So what policy initiatives are our EU colleagues embarked upon and how will Ireland navigate new dynamics among the remaining 27 Member States of the European Union? Will it be possible to replace the affinity we enjoyed with the UK on certain issues with new partners? Is there a danger that Ireland, and indeed other small nations, will be steamrolled by the Franco- German engine?

It is in Ireland’s critical national interest that we look beyond Brexit towards the active role that Ireland can play in the Europe of 27 member states. Now we need to look for the answers to these questions, and be proactive by making positive contributions to the architecture of the Union.

It is easy to become complacent about the unique project that is the European Union. The EU has been our engine of growth for forty years. It has delivered social progress, provided markets for our manufacturers and supported our farming sector. But most of all the EU is a radical democratic experiment, bringing together people with differing cultural backgrounds, national histories, and political views, which creates a radical centre with space for all to contribute: in short it is a revolution created by consensus. This is a project without analogue and therefore by definition visionary. Ireland’s active participation affords representation and influence to a small country that alone would not carry the same weight.

There are voices arguing for Ireland to consider our own position as members of the EU . Yet that would relegate us again to the relatively well-rehearsed role of being a region of the United Kingdom. While I profoundly disagree with this approach, it is absolutely imperative that those voices are taken seriously and that platforms are provided where debates can take place in an atmosphere of mutual respect and where arguments can be robustly interrogated. This is a fundamental part of the functioning and legitimacy of a democracy, and it is crucial to the fragile European democracy we are part of.

The future of the EU inevitably involves tradeoffs for Ireland. We will have to look afresh at issues that were, at one time, assumed to be settled. Migration, climate change, corporate tax, free trade and a renewed commitment to the Sustainable Development Goals are just some of the policy areas in which Ireland will need to adapt and adapt fast. On 26 September French President Emmanuel Macron called for a reduced European Commission and full economic union between France and Germany. Ireland needs to have coherent policy on such issues. 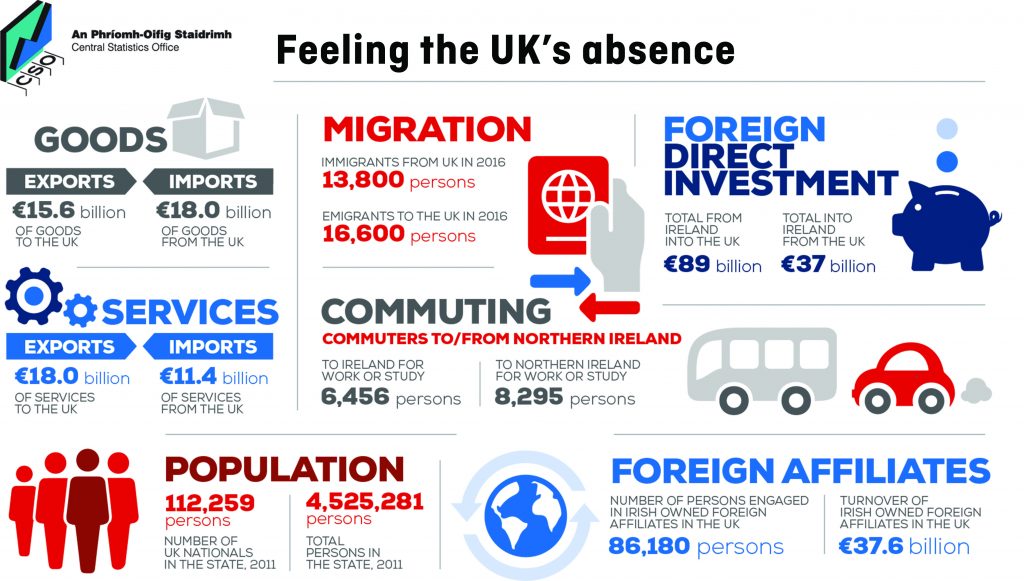 Yet, that doesn’t have to mean giving up on current policy: it should mean, in the first instance, mapping the fast-changing international context in which Irish policy must develop, and then developing next-generation strategies that have regard to that changing context. Then nuanced debate should ensue in all spheres of Irish public policy and society to establish where our new priorities lie.

The difficulty currently is that none of these issues is being debated here in Ireland outside of small groups of professionals and Europhiles. On our airwaves there are legitimate and passionate debates about the health service, inadequate housing and reform of the Garda; but little about the direction that Europe is now going.

Meanwhile the debate continues to gather pace in other European capitals. The French President, Macron, wants to deepen the Eurozone and provide for a Eurozone budget, Finance Minister and Parliament. Macron is also pushing an agenda that is more protectionist than will be comfortable for Ireland. The UK’s presence in this debate will be sorely missed. The moves towards restrictions on foreign acquisition of critical national infrastructure, perceived as directed towards China, can also be viewed as an example of hidden protectionism.

So… how can small but globalised economies like Ireland make their voices heard?

In March 2017, the President of the European Commission, Jean-Claude Juncker, published his White Paper on the Future of Europe. Juncker’s paper set out five scenarios to provoke debate across the European Union. Much like any consultancy report, some of the five should not be taken seriously and are merely tools for comparison, yet components of the remainder have merit. In his State of the European Union speech on September 13, Juncker echoed Macron’s call for an EU Finance Minister and elaborated his own vision for the development of the EU to 2025, preferring a unified model of deeper integration to a multi-speed Europe, represented by enhanced co-operation and opt-outs.

Finally, the European Commission has issued what are called ‘reflection papers’ on issues such as globalisation, Defence policy and the EU budget. All of these contributions have acted as catalysts for a renewed debate across the continent about the EU ’s future direction.

Amid this, to contribute to the debate in Ireland, we can look to a number of positive examples of coalition-forming that Ireland is already engaged in, which will provide a means to amplify our voice in the EU following the UK withdrawal.

First, an emerging alliance for Ireland is the new ‘Digital Frontrunners’ group. Ireland is already identified as a member of this, very loose, grouping of EU and European Economic Area states, predominantly made up of Nordic and Baltic States. The binding logic of the group is that each of the members is committed to the development of the Digital Single Market and the changes that are required to the single market to liberate a potential €450bn of economic activity across the EU.

On 27 September 2017 Ann Linde, the Swedish Minister for European Affairs, addressed the Institute of International and European Affairs, making the case for increased co-operation among smaller Member States, stating “In a time when EU co-operation is challenged by tensions, co-operation must continue to develop and improve. Not through major new projects that require treaty change, but by focusing on areas where there is added value in co-operating at a European level”. Minister Linde has been a key force behind the Digital Frontrunners group, and her visit to Dublin underlined Ireland’s critical role within this grouping. She was joined at that event by Minister Helen McEntee, Ireland’s EU Affairs Minister who emphasised that after Brexit it is clear that Ireland’s interests are best served as an active participant in the EU.

Another interesting recent instance of our activity in Europe can be seen in the decision of the Irish Government to allow the Naval Service to participate in the EU search-and-rescue mission in the Mediterranean, Operation Sophia. This was not a departure from underlying policy, as the ‘triple-lock’ was deployed and, of course, the Naval Service, has been doing great work on search and rescue for some time. In this new role, Ireland will bring to bear our humanitarian tradition but also strengthen alliances in Europe.

After the last major enlargement of the EU in 2004, the formation of loose ad hoc coalitions among Member States was encouraged in order to facilitate decision-making in the Council of Ministers. Today, there are several strategic groups in the Council, including the Visegrad 4, the Nordic-Baltics, and Benelux. Now, at a time of great change internationally, Ireland needs to shore up its own alliances, and seek new support. Despite our positive relationships across Europe, there is no doubt Ireland will feel the UK’s absence.

It follows then that part of mitigating Brexit’s impact on Ireland entails fully contributing to debates on the future of Europe, to ensure our interests, and those of other small countries, are heard and influence the outcome.

At the IIEA we will welcome speakers from all EU Member States over the next three years as part of our Future of the EU 27 research programme, and we hope that their remarks will further this crucial debate, at home and abroad.

Barry Andrews is Director of the Institute of International and European Affairs (IIEA).