The suppurating carcass of the proposed Anglo Irish Bank headquarters on North Wall Quay in Dublin became a symbol for Ireland’s economic collapse. Its original architects Traynor O’Toole Ltd – in what is best seen as a fitting gesture – eventually went bust. In plain view of all on Dublin’s regimented riverside, the country ogled five years of awkward nudity as it chaperoned visitors – and emigrants – to the airport and port. The 20,000 sq m skeleton would at last be fleshed when Central Bank bought the site in May 2012 from NAMA for €7m. The morally bankrupt Central Bank was the only agency that could afford it, or at least the only agency that could make the Department of Finance believe that it could afford it.

The fable of Aggrandised Construction and the Central Bank starts at Dame Street in the early 1970s when Sam Stephenson of Stephenson and Gibney was summoned by the Goliaths of State Financing to a meeting where they asked him to deliver a behemoth appropriate to their egos in what passed for Dublin’s financial district, and – fresh from stellar controversies over Wood Quay and Fitzwilliam St, to insulate them against inevitable controversy that would arise from their wish for a fifteen-storey building in a Georgian area with a medieval streetscape, that would involve demolishing the attractive 1790s ‘Commercial Buildings’. As with anything to do with the banking sector in Ireland its construction was controversial, though Stephenson artfully proposed a building that was no more than eight storeys. The problem was a breach of the planning permission involving a 30-feet exceedance of the permitted eight-storey height and the complicity of the planning authority. Dublin Corporation, the site shut down in the summer of 1973. A cause celebre for the cynics it was as late as 1979 and only after a public inquiry into the flouting of planning laws and a 400% cost overrun (£10m mitigated only by the payment by Stephenson of a ‘fine’ of £200,000 to the Central Bank) that it could be officially opened. The building is one of a handful of buildings in the world where the structure uses suspensions held from its centre. During construction each floor was built at ground level and then hoisted up with all the fittings and services already in place. Internally the offices are lit by floor-to-ceiling glazing which also gives the buildings its bold, layered, almost striped. appearance. Even though it is set back from the street line, its scale and massing dominates the street and skyline. Since, pending overdue traffic-calming on College Green, Dublin city-centre has no square, its plaza became the natural gathering area for skateboarders and protesters, notably Occupy.

Sam Stephenson’s building has become the face of the Central Bank. When Village attacked the regulatory culture of the Bank some years ago it illustrated the story with an image of the building blindfold and with an orange in its concrete mouth. This imposing, impenetrable brute could not keep up with the changes, not only in modern corporate environments but also in society. Stephenson, roguish contrarian that he was, probably wouldn’t have wanted it to. Manifesting the old hierarchical system that served the Bank and the country so badly, the governor and directors occupied the infamous ‘seventh floor’, the city’s attic and a no-go zone for most staff – notably women, designed as it was with no ladies’ toilets – perhaps a last symbolic hurrah of a patriarchy before the spoilsport EEC imported equality standards including an end to the marriage bar that required women to give up their jobs in the civil service when the entered holy matrimony. There were inevitable difficulties with 1,400 staff members spread across six locations – three in Dame Street, and others near Harcourt Street, at Spencer Dock and in Sandyford for its currency centre. In January 2017 the Central Bank said it has completed the sale of its Dame Street premises to Hines and Peterson Group (Hong Kong) at a price of about €67m. Given the impending pedestrianisation of part of College Green, the new owners may well be looking to provide additional retail space at street level, some of which may encroach on space regarded as public. As it is not on Dublin City Council’s record of protected structures much – too much – is possible for this grizzled modernist avatar. 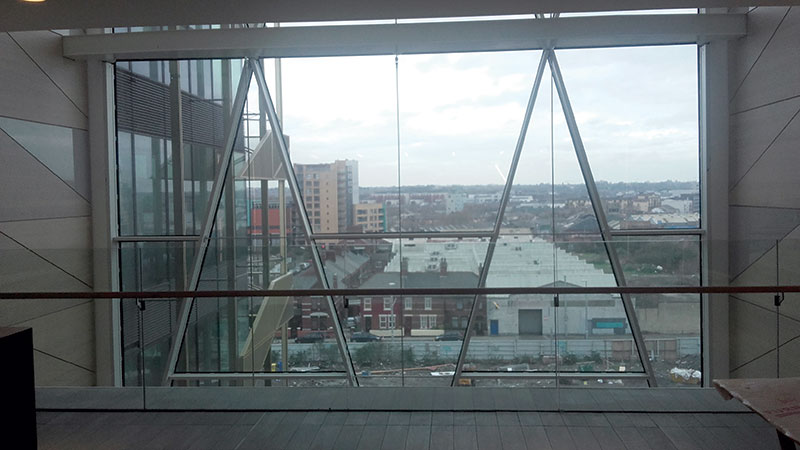 Meanwhile the task of completing the new €140m headquarters was assigned to Henry J Lyons Architects, loaded with an implicit imperative to match the symbolism of the Dame St precursor. The 30,000 sq m building they have completed can house 1,400 staff and contains a range of open floor office areas and meeting rooms.Dublin’s quays are famously primarily a balance of small single-plot historic buildings and set-piece public institutional buildings including the Four Courts, the Custom House and more recently the Council’s Civic Offices. The design relates to the maritime history of the docklands with its triangular panels consolingly reminiscent of the sailing ships that once brought trade. Its distinctive colour, which shines like gold in the morning sun, has been criticised as ostentation.

The form is made by wrapping the workplace in a simple but sophisticated glass skin which in turn is protected and shielded from glare and solar heat-gain by an outer layer of anodised aluminium triangular mesh panels. The perforation takes the appearance of solidity depending on the light. The concept evolved from a long discussion with Dublin City Council – which feared the appearance would be that of a big steel cage.

Before the design stage Henry J Lyons statistically surveyed the staff of the Central Bank so they could envisage the life of a banker over a full week. The staff thought they needed large meeting rooms but instead what they needed was lots of smaller meeting rooms and break-out spaces. In effect conditions have been standardised on the understanding that staff can be moved at any time.

There is a cashless staff canteen which accommodates up to 370 people, with coffee stations immediately off it. There is also what they call ‘My IT Hub’ a shopping-centre-like island with IT staff stationed there for all the staff’s telecommunication and technical needs – a little bit of what is perceived of ‘Google’ indulgence. The workspace seems generous with ten square metres for every person but this is average for this building type, and who could begrudge bankers, Irish Central Bankers, a little comfort?

The new Central Bank includes a conference centre with 110-person capacity and exhibition space at ground-floor level. The archives will be housed there, accessible to the public by appointment.

The progressive former Governor of Central Bank Patrick Honohan insisted on a sustainable approach, using high-performance, long-life materials, to achieve a BER of A2, a radical improvement from the B1 of the original Anglo plan. River views have been exploited, creating a soothing backdrop unmediated by traffic. Wide-ranging use limestone enhances the riparian rawness.

Irish fashion designer Helen Cody produced the handmade carpet for the Board Room on the second floor, inspired by Paul Henry’s paintings and the light sculptures are by Niamh Barry. Colours are voguishly muted – limewashed oak, yellow, blues, greys, concrete tiles, moss green, off-white porcelain tiles. Sam Stephenson and the grey, entitled 1970s will be turning in their suburban graves.

The clients insisted on a 9m-wide central atrium kept largely clear except for two bridges. Air and space, you see. The two-storey basement podium inevitably houses a wellness space, so stressing Central Bankers can catch up on their pilates and yoga, as well as storage for bikes, showers and locker rooms. A limestone base around the building serves as a seat for staff during lunch hour, when the infamous local winds allow, and there is a roof-top terrace. It was debated whether to move the luminous sculpture Crann an Óir (Tree of Gold) by Éamonn O’Doherty from the Dame Street concourse. It has stayed put but there are subtle homages to this well-liked piece throughout the building.

With this fresh start the Central Bank has shown genuine willingness to break down barriers, connecting not only with the river but with the public. The new top floor with a new library and training centre is – pointedly perhaps – for all staff. If the Anglo plan had proceeded this would have been the office of its CEO, David Drumm. The office of the Governor (no sign of a change in this nomenclature) is on the second floor, the busiest floor.

The role of the Central Bank is protecting and husbanding the wealth of the country. The open nature of the architectural design almost suggests that this wealth is not locked up by an elite but is shared by the public. This is atonement. With no expense spared.