I was having dinner with Peggy Lee.  I had just interviewed her in the bedroom of her home in Hollywood and she had kindly invited me to stay, she resting on the bed after a recent fall and me sitting beside her in a chair, quietly thrilled. A butler brought in tortillas and scotch.  As one of the great song stylists of the twentieth century, Peggy was a sophisticated woman with an impressive knowledge of the arts and a large library of books lining the walls of her bedroom.  She had been reading about Michelangelo and when the conversation turned to his most famous sculpture, she made a telling observation:  “Imagine seeing David in that block of marble”. 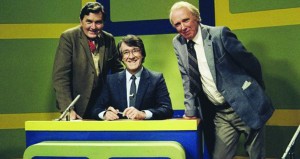 It was a phrase which I borrowed some years later when I began training and coaching prospective radio presenters and producers.  Rather than impose a style, the better approach is to chip away at the bits that aren’t David and allow him to come alive, so that an authentic personality emerges, relieved of the irritants and bad habits that compel the audience to move the dial.

It was akin to the technique I encountered in the mid-Sixties, when I was being trained as a continuity announcer for Radio Éireann, based then in the old studios in the GPO.  Denis Meehan was in charge of the Announcers Section, aided by his deputy Brigid Kilfeather and his Chief Announcer, Terry Wogan, who spent his time subtly contradicting what Brigid had said the previous evening.

Terry was much influenced by Denis, a witty and kindly man, who encouraged us to sound like ourselves, rather than try to sound like ‘the man on the wireless’.  On the training course, he picked us up on pronunciation errors, in Irish and English, and gave such sage advice as, for example, when confronted with an unfamiliar name and unsure which syllables to emphasise, equal stress on all syllables gets you out of trouble.

Denis favoured an informal style, serious on occasion, but natural in approach. His philosophy encapsulated the essence of public service broadcasting – to make what is good, popular and what is popular, good. He was adamant that the national station should show respect for the audience, by treating them as intelligent. “They may be ignorant”, he said, “that is, lacking certain information, but they are not stupid”.  It’s a mantra that has underpinned my broadcasting:  ‘Assume they are Bright’.

Denis reserved much of his spleen for Speech Tunes. These are bad habits that infest the airwaves even now, on radio and television.  They characteristically entail delivering a script in a sing-song manner that bears no resemblance to the meaning of the words. It includes pauses in. The middle of the sentence.  And ends in a downward descent to the full stop at. The end of the sentence.  A Speech Tune rings false, is tiring to listen to and can be cured only if the speaker concentrates on the meaning of the text.

Denis also reminded us that, even though there are thousands listening, they are listening in ones.

The days of communities clustered around a radio set are long gone, as are entire families watching the same TV set, so an intimate style by the presenter works best.

Eventually, there is an audition. A Radio Éireann executive told me of his way of deciding on one presenter, rather than another: “Nice people come across as nice people”, he said, “and bastards come across as bastards – and there’s damn all you can do about it”. There is truth in that.

So, it is possible that, having chipped away the bits of marble that aren’t David, we are left with a figure that is less than beautiful.  You know the kind of broadcasters  I mean-  the smug ones, the dull  ones,  the ones that regard  programmes as an opportunity to show off their knowledge, the ones who refuse to adopt even the most basic pronunciation guidelines, (‘Nooz’, anyone?).

Training and coaching can release what was inherently already there. But it can’t teach talent.