Three recent events, distinct as they may appear, point to a singular shared risk faced by the Irish economy, a risk that is only now being addressed in our policy papers and in the mainstream media.

First, over the course of May, European financial markets have posted surprising rises in Government and corporate bond-yields amidst falling liquidity, widening spreads and increased volatility.

Second, both the IMF and the Irish Government have recognised a simple fact: once interest rates revert back to their ‘normal’ path, things will get testing for the Irish economy.

And third, the Irish Government has quietly admitted that the fabled arrears solutions to our household debt crisis are not working.

Deep below the lazy gaze of Irish analysts, these risks are connected to the very same source: the massive debt overhang that sits on the back of our struggling economy.

Take the first set of news. The problem of spiking yields and blowing up trading platforms in the European bond markets was so pronounced in May, that the ECB had to rush in with a bold promise to accelerate its quantitative-easing purchases of Government paper to avoid an even bigger squeeze during the summer. All in, between January and the end of May, euro-area government-bond yields rose by some 6 basis points, the cost of non-financial corporate borrowings rose by around 9 basis points, and banks’ bond yields were up 1 basis point. This is against a background of declining interbank rates (3-month Euribor is down 10 basis points) and massive buying up of bonds by the ECB.

In one recent survey completed by Euromoney before the May bond-market meltdown almost 9 out of 10 institutional investors expressed deep concerns over evaporating market liquidity (higher costs of , and longer time to complete, trades) in the sovereign-bond markets. In another survey, completed late in the first quarter (1Q) 2015 by Bank of America-Merrill Lynch, 61% of large fund managers said that European and US stocks and bonds are currently overvalued – the largest proportion since the survey began back in 2003.

In the US the current consensus expectation is that the Federal Reserve will start hiking rates in 3Q 2015. In Europe, the same is expected around Q3 2016. And recently, both estimates have been adjusted closer, despite mixed macroeconomic data coming from the economies on the ground. If the process of rates normalisation coincides with continued liquidity problems in the bondmarkets, we may witness both evaporation of demand for new government debt issues and a simultaneous increase in the cost of funding for banks, companies and the Governments alike.

Which brings us to the second point – the role of interest rates in this economy.

This increase would bring ECB rates to just over 1/3rd of the historical pre-crisis-period average – hardly a major ‘normalisation’ of the rates. Which means that such a hike will be just the start of  a rather protracted journey that is likely to see rates rising closer to 3-3.5 percent.

But here is a kicker, the ESRI exercise does not account fully for the realities on the ground.

In addition to the ECB rate itself, several other factors matter when we consider the impact of interest-rate  normalisation on the real economy. Take for example the cost of funds in the interbank markets. Average 12 months Euribor – the prime rate at which highest-rated euro-area banks borrow from each other – averaged 3.29% for the period 2003-2007. Today the rate sits at 0.18%. This means rates normalisation will squeeze banks’ profits. If the euro area, on average, were to hike loans in line with ECB increases, while maintaining current 12-month average lending margins, the rate charged on corporate year-and-over loans in excess of €1 million would jump from the current 2.17% to 3.37%.

It turns out that due to our dysfunctional banking system, Irish retail rates carry a heftier premium than euro-area average rates, as illustrated in Chart 1. This of course simply amplifies the impact of any change in the ECB base rate on Ireland’s economy. 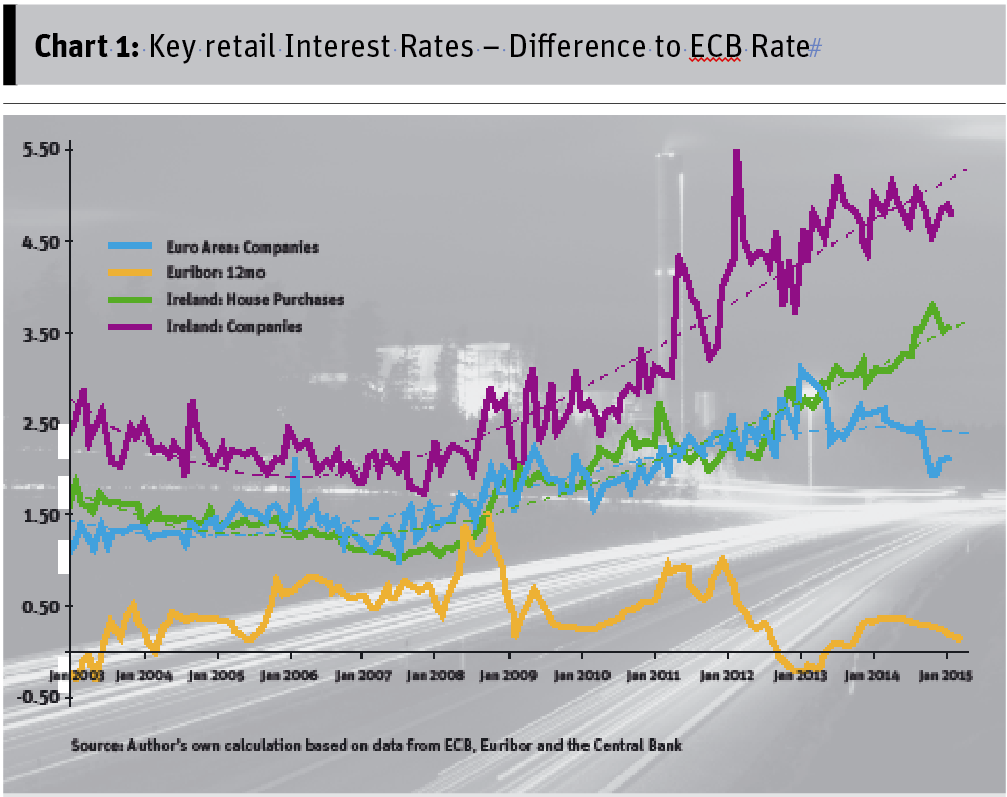 The reason for this is the pesky issue of Irish banks’ profitability – a matter that is distinct from the average euro-area banking-sector performance due to the massive non-performing-loan burden and the legacy of losses carried by our banking institutions. According to the latest IMF assessment published in late April, the Irish banking system is the second worst-performing in the euro area after the Greek when it comes to current levels of non-performing loans. In today’s terms, this means that the average lending margin charged by the banks in excess of ECB policy rate is 3.4% for house purchase loans, 5.63% for loans of under €1m to Irish companies with a fix of one year and over, and 4.0% for loans of over €1m to the same companies. This means that a hike in the ECB rate to 1% will imply a rise in the interest rates charged by the banks ranging from 0.84% for households loans, to 0.92% for smaller corporate loans and to 1.22% for corporate loans in excess of €1m.

Chart 2 highlights what we can expect in terms of rate movements in response to the ECB hiking its base rate from the current 0.05% to 1%. 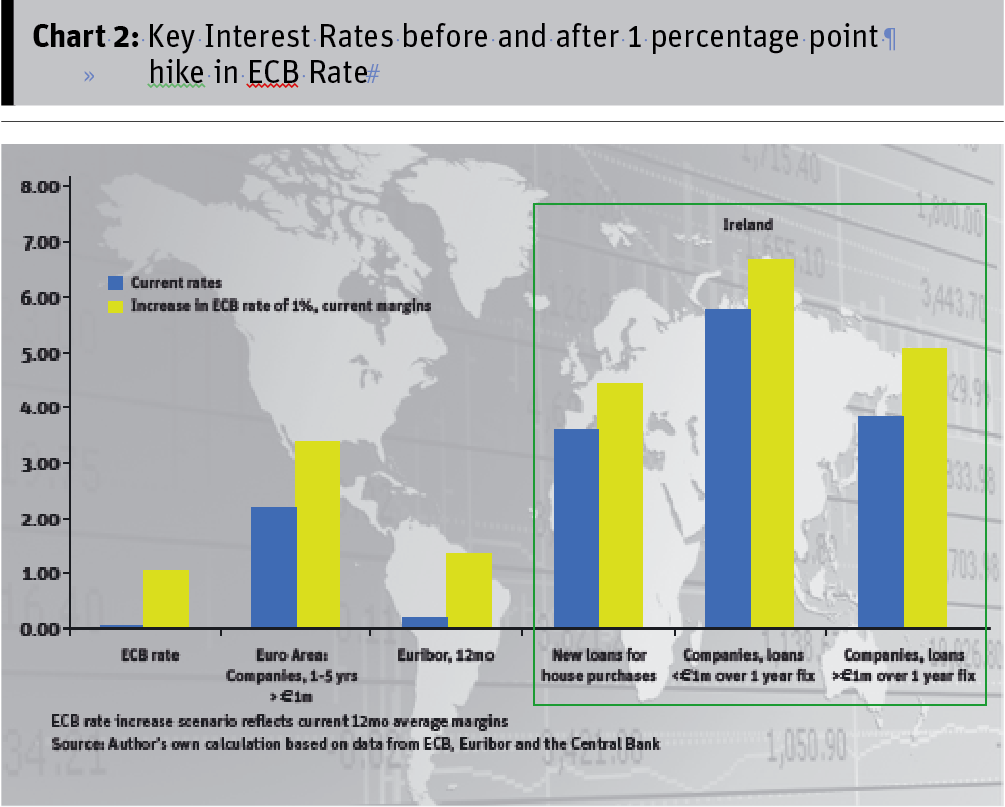 No one – not the ESRI, not the Central Bank, not any other state body – knows what effect such increases may have on mortgage arrears, but it is safe to say that households and companies currently experiencing difficulties repaying their loans will see these problems magnified. As will households and companies that are servicing their debts, but are on the margin of slipping into arrears.

While the ESRI-led analysis does enlighten us about the effects of higher rates on tax revenues and state deficits, it does little to provide any certainty as to what happens with consumer demand (linked to credit), property investment and development (both critically dependent on the cost of funding), as well as the impact of higher rates on enterprise formation, and survivorship, rates.

In addition, higher rates across the euro area are likely to imply a higher value for the euro relative to our major trading partners’ currencies. Which is not going to help our exporters. Multinational companies trading through Ireland are relatively immune to this effect, as most of their trade is priced internally and a stronger euro can be offset by accounting and other means. But for SMEs exporting, every percentage point increase in the value of the euro spells lower sales and lower profits.

Across the euro area, there many ways higher rates can drain growth momentum in the economy.

But in Ireland’s case, these pathways are almost all invariably adversely affected by the debt overhang carried by  households and the corporate sector. Current total debt, registered in Irish financial institutions as being extended to Irish households and resident enterprises stands at just over €263.7bn. And that is before we take into the account our Government debt, as illustrated in Chart 3. 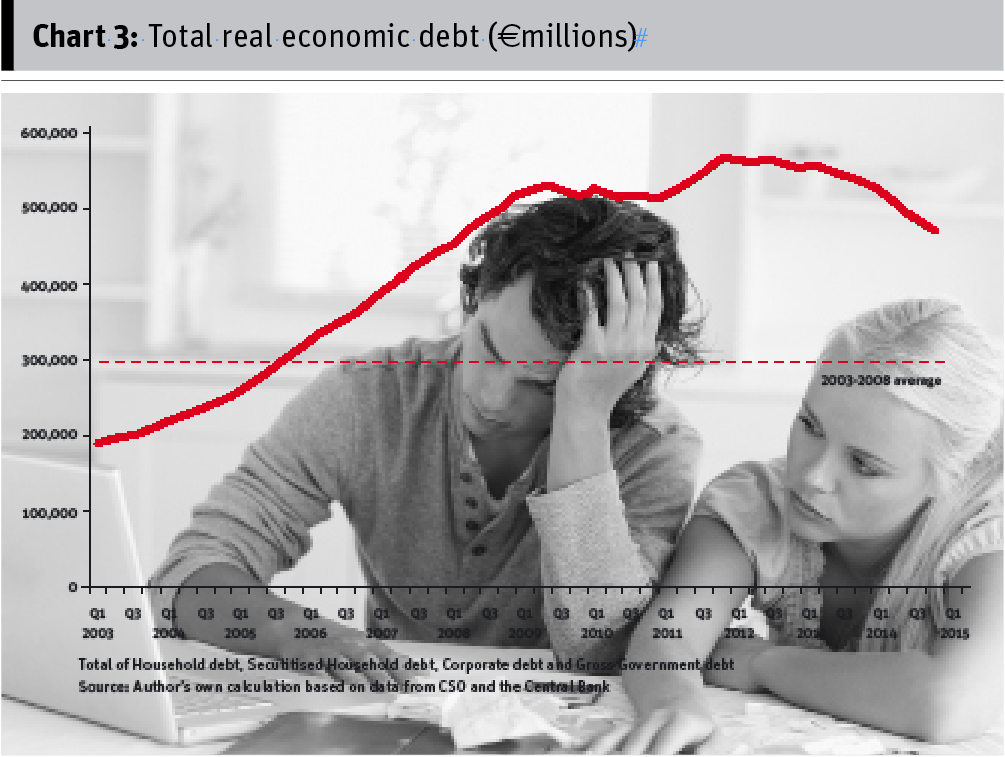 A 1 percentage point increase in retail rates would see some €2.64bn worth of corporate and household incomes going to finance existing loans – an amount that is well in excess of the €2.28bn increase in personal consumption recorded in 2014 compared to 2013, and whch is 24% of the total increase in Ireland’s GNP over the same period. Add to that added Government debt costs which will rise, over the years, to some €1.5bn annually.

What is not considered in the analysis is that at the same time the rising cost of credit is likely to depress the value of households’ collateral, as property prices are linked to credit-market conditions. This implies that during the rising-interest-rates cycle, banks may face the added risk of lower recovery from home sales.

The effect of this would be negligible, if things were relatively normal in Irish mortgages markets. But they hardly are.

You’d guess that the ESRI and the Department of Finance would have done some homework on all of the above factors. But you would be wrong. There is no case-specific risk analysis relating to interest-rate changes performed. Perhaps one of the reasons why most analysts have been dismissing the specific risks of interest rate  increases is due to the lack of data and models for such detailed stress-testing.

Another reason is the false sense of security.

Take the US  case. Its economy is now in mature recovery, based on the most recent survey of economic forecasters by the BlackRock Investment Institute. But the underlying weaknesses in growth remain, prompting repeated revisions of analysts’ expectations as to the timing of the Federal Reserve rates hikes. Still, the Fed is now clearly signalling an upcoming rate hike.

The Fed is pursuing a much broader mandate than the ECB – a mandate that includes the target of full employment. This is harder to meet than the ECB’s singular objective of targeting inflation.

While European inflation is low, it is not as low as one imagines. Stripping out energy costs – helped by low oil prices – inflation in the Euro area was estimated to be at 0.7% in April 2015. The  prices of gas, heating-oil and fuels for transport shave  0.66 percentage points off the headline inflation figure. Although 0.7% is still a far cry from the  ‘close to but below 2%’ target, for every 10% increase in energy prices, the HICP (Harmonised Index of Consumer Prices)  metric watched by the ECB will rise approximately 1.06 percentage points. So far, in April 2015, energy prices are down 5.8% year-on-year – the shallowest rate of decline in five months. Month on month prices rose 0.1 percentage points.

Sooner or later interest rates will have to rise.  In the US explicit Fed policy is that such increases will take place after the real economy recovers sufficiently to withstand such a shock. In the euro area, there is no such policy in place. That is dangerous for Ireland. •