Often we hear of how terrible climate change is, how it will cause the death of millions, mass extinctions, desertification and the end of life as we know it. But what are the roots of our common crisis, on our common home? Is it really all our fault, or, as environmental historian Stefania Barca asks, was all that progress “a free lunch, stolen from someone else’s table”?

Over 97% of climate scientists have shown that climate change is man-made. Indeed, many 21st century scientists and ecologists say we have entered a new, man-made geological epoch that irreversibly changes the face of our planet – ‘the Anthropocene’.

In this narrative, mankind’s Industrial Revolution was an ‘unbound Prometheus’. We – note the collective we – stole fire from the Gods to create a new progressive world for all. But such arrogant self-worship drew upon us their vengeful wrath. Humans – naturally greedy, exploitative, and born of original sin – created the climate crisis.

However, as historians enter conversations about climate change and integrate social and environmental stories into the Industrial Revolution narrative, a more complex picture arises.

If you listen, the dominant climate change narrative sounds not only Abrahamic, but suspiciously similar to the words of our own Brian Lenihan after the 2008 crash. The then finance Minister infamously told the country, “we all partied”: therefore we all must pay. Climate change is similarly presented as universal unavoidable human folly, obscuring the role of an exploitative, capitalist economic system built to see social and environmental harm as “unforeseen negative externalities”.

From the enclosure movement, to the slave trade, to colonisation and the subjugation of the poor into dangerous and underpaid work, the Industrial Revolution was built on unaccounted for human and environmental cost. That Revolution depended on fossil fuels.

Today, renewable energy is presented as unreliable, inefficient and heavily reliant on Government subsidies. Yet climate-change historian Andreas Malm shows that throughout the 1700s, the Industrial Revolution was driven by the water-run mill house which peppered the English countryside, running off its plentiful rivers and streams. Fossil fuels were an erratic, expensive fuel, rejected for causing serious respiratory and environmental damage to workforces and communities.

In the 1830s, however, something strange happened. Steam power gained supremacy in spite of water meeting all economic concerns – being cheap, abundant, powerful, efficient and technologically potent.
What could have happened?

First, because water moves, for millennia it has been enshrined in legal systems as subject to res communas, or communal law. The same communal law applies to all mobile renewable resources granted to us by a generous earth – sea, wind, tide, sunlight. Water is a property that belongs to no person, its use bestowed to all. To use water, mill-owners had to cooperate with one another for the profitable use of plentiful reservoirs. In an economic system that centred on the self-interested individual, water knew no boundaries, respected no deeds, no private-property rights.

In contrast, fossil fuels for steam power could be sequestered for exclusive use, cut up, carted away, stored and kept. The resulting excess did not affect profits, only the lungs and land of workers. Mill-owners were unwilling to embrace co-operative, profit-sharing business, even if it was in their own interests.
Second, to complement divisible, piecemeal fossil fuels you need a workforce that can similarly be cut up, carted and stored away.

Before fossil fuels, workers in remote country areas where rivers and streams were plentiful were loath to work in dark and dangerous mills without good remuneration. Millowners, unwilling to lose profit, sought unpaid labour in the form of orphan apprentices. Because mills were often located in remote, local areas, however, it was easier for workers to collectivise. Apprentice girls were soon “breathing defiance” despite beatings and solitary confinement.

Unionised workers meant less profit for those at the top of the pyramid. Millowners therefore promoted cartable, storable fossil fuels and helped industry move to cities where there was already an “industrious”, docile and fluid workforce; broken-in bodies resigned to the discipline of the master of the mill.

In his history of the Anthropocene narrative, Andreas Malm shows fossil fuels are a “power device”, a political choice naturalised through the barrel of a gun. Once, mills had to be made fireproof because workers burnt them. Nature, and the class forced to mould and exploit it, were violently cut from the progressive narrative of the Industrial Revolution.

Our alienation from Nature is not the natural result of anything, not the result of inherent human greed and cruelty. Our alienation is deliberate and tied to an existing system where the culpability for harm, whether the banking crisis or deaths in Rana Plaza, is dissipated through complex legal networks. Culpability is sucked away from its source and spread out to fix upon the bodies of front-line workers who bear the brunt of the blame and the brunt of the damage – environmentally, physically, financially.

Classic environmentalism has a flavour of Malthusian misanthropy. It implies that individualistic moralistic acts alone are necessary to solve what is actually the result of an economic framework that deliberately obscures blame and traps the most vulnerable. Climate change only exists because there are places and people that we allow to decay in order to preserve the current exploitative economic framework. These people and places are what Naomi Klein calls “sacrifice zones”.

In fact, we are living in a ‘Capitalistocene’, argues sociologist Jason W Moore, built on sacrificing the majority of human and environmental life for the wants of the few: “The Anthropocene makes for an easy story. Easy, because it does not challenge the naturalized inequalities, alienation and violence inscribed in modernity’s strategic relations of power and production”.

In a recent study by Richard Heede, just 90 entities, including ExxonMobile, Norway’s Statoil and BP, are responsible for the purported ‘Anthropocene’ change of the last 200 years. The extreme volatility of our earth’s climate is no accident. As 350.org campaigner Bill McKibben says, “It is being killed, and those who are killing it have names and addresses”. 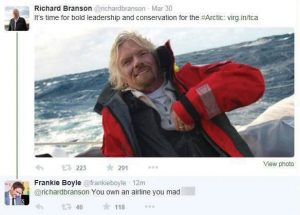 How did we get to the point where government can, as it did some years ago, mount a grand campaign centred on the notion of “the Power” (culpability?) “of One”? Blame is so befogged and our economic class so alienated from the realities of their affluence that Richard Branson, the billionaire owner of an airline company, can tweet about saving the Arctic.

Where to from here?

The preamble to the Paris agreement states that countries will take “into account the imperatives of a just transition of the workforce and the creation of decent work and quality jobs”. Long fought for by a coalition of environmental NGOs and trade union groups, the 197 country signatories to the UN Framework Agreement on Climate Change now in effect recognise that both nature and workers were made invisible in the Industrial Revolution narrative.

The EU, for example, has instigated a Just Transition Fund, aimed at helping workers in sectors negatively impacted by the transition to a zero-carbon economy. To build this new fair economy, we must divest from and suppress fossil fuels and invest our pensions, our wealth, and our taxes in clean, safe alternatives. We must pour the wealth and knowledge of fossil fuel engineers, farmers, utilities and peat-plant workers into creating this new economy.

Solidarity does not fall from the sky, it must be worked for. The suffering of one affects and lessens the humanity of us all. Our solution to the crisis must be, as eco-feminist Donna Haraway says, to “Make Kin”.  We must fight against our alienation from each other and other forms of life. Fight against the false separation from our living world and fight to create an economy that reflects the mutually beneficial interdependence of our life on earth. In the words of the #ClimateGames movement, “we are not defending Nature, we are Nature defending itself”.

Sinéad Mercier LLM (LSE) is a Dáil Researcher and former consultant in climate change and environmental law. She is a member of SIPTU’s Global Solidarity Committee.