In late October, a Ryanair flight from Kraków to Dublin was delayed by fog, prompting an adventurous Irishman booked on the flight to take to social media to complain. After taking his children to the death camp in Auschwitz on an educational weekend, he was raging at being stuck at Kraków airport, and wrote that he and the other passengers had been crammed ‘like cattle’ into the departure lounge.

Such fantastic lack of awareness and reflection is fertile ground for writers and a decade in Europe convinced RTÉ’s Tony Connelly that there was comedy gold to be mined by trawling through intra-European misunderstanding and conflict.

The foreign correspondent is the professional version of the innocent abroad and has produced some gems of 20th century literature, notably Evelyn Waugh’s ‘Scoop’, based on Waugh’s own experience of covering the Italian invasion of Abyssinia in the 1930s. Covering the war for the Daily Mail, Waugh scooped a story and sent it back in Latin for secrecy. The editors thought it was gibberish and binned it. Connelly’s book does not suffer from over-sophistication. 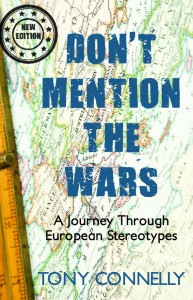 In 2009, to mark the 20th anniversary of the fall of the Berlin Wall, Connelly travelled by train through central Europe, stopping off in Germany, Poland, the Czech Republic and Hungary, and that journey appears to have given him the idea for this book. Perhaps that’s why the book sometimes has the air of a 1990s ‘Let’s Go Europe’ minus the hotel tips and exchange rates. Connelly had also visited Denmark, Sweden, Finland, France, Spain and Italy, and these countries attract the rest of his focus.

The formula is straightforward: Connelly spends a couple of days talking to expats to see how their initial impressions changed after spending some time living in the adopted country, follows that with some historical background, and then wraps up with some more amusing anecdotes. So, a chapter on the Czech Republic starts in breweries, is followed by a bit of history, and then moves to a Semtex factory. Unless you’re an explosives expert, you won’t be aware that plastic explosives are a Czech invention, but do they say something about the Czech character? Is the Czech Republic synonymous with beer? The Germans and the Polish would argue with that. That’s the problem with writing about stereotypes: to undercut them requires – at the very least – sharply observed and insightful anecdotes, or reflection on the deep cultural and social mores of a country.

It’s hard enough to work up the stereotypes in the few days allocated, but whatever energy was expended seems to have left none for some serious insight into any of the cultures, as evidenced by Connelly’s visit to Scandinavia. Connelly spends a few weeks travelling at low speed through Denmark, Sweden and Finland and it may take readers just as long to get through the sleep-inducing 80-plus pages devoted to the Scandinavian countries. Other bits stay in that should have gone. In France he visits a vineyard run on biodynamic principles which is inaccurately simplified as ‘organic plus’ and even ‘homeopathy’, suggesting he just doesn’t care enough about what is on offer. That’s the type of marketing exposure that vineyards simply can’t buy. Glass of homeopathic wine, anyone?

Otherwise, Connelly seems quite happy to be in France but that first chapter lays out the Anglocentric bias, and of the more than twenty people interviewed, only six are French. It’s a view of France from an Anglophone journalist drawn from English-speaking sources and English historians. France has borders with seven other lands; it would have been interesting to get a bit of perspective from citizens of those countries. In places like Holland, schoolchildren learn the language of nearby countries, and common languages taught in border areas reduces the banal national stereotyping. How did linguistically diverse Belgium throw up the multiculturalism-reviling Vlaams Blok/Belang? Unfortunately, as it is, the book could be more fairly subtitled ‘A Journey through Anglophone Stereotypes’.

Ask Germans and Poles for their impressions of one another and you’ll start getting some fascinating insights into each country. Poles often discuss Germans and Germany (and it’s not pretty) and assume that Germans think badly about Poland in return; they get even more annoyed to find that despite being 90km from Berlin, Poland barely registers with Germans at all. Or take Poland and the Czech Republic. A lot of young Poles gaze longingly over the border at their Slavic neighbours and admire their tolerance, freedom from religious doctrine and liberal laws. In return Czechs mock the agricultural Poles and their clerical ways, but with a bit of provocation, young Czechs might allow that they have serious questions about their own country, and even that theatrical sleigh-of-hand was at work while former leaders under communism dropped out of sight for a time, all the while moving effortlessly into dominance in new businesses. What happened to their industry, and competition? Why was Volkswagen allowed to buy Skoda? How did T-Mobile, Vodafone and O2 end up in control of the telecoms business? These issues and questions seem beyond the grasp of Connelly.

The chapter on Italy comes closest to a proper analysis of the bobbling European economy, alleged cause the updating of this book. The Germans may churn out cars but do Berliners really shop in centres built to launder Italian mafia money? Apparently so – but you already know that if you’ve read ‘Gomorrah’, Roberto Saviano’s grim account of the Naples mafia and their effortless acccomodation of globalisation of commodities from cocaine to couture. Is there more than a passing link between the oligarchies of Naples and the march of global capitalism? We never find out, because we’re flying along on the surface rather than stopping to poke around a bit. The book does have a good bibliography, and points readers towards Norman Davies on Poland or Giles Tremlett’s ‘Ghosts of Spain’.

That might have been that, but as New Island notes with studied understatment, “a lot has happened in the nearly five years” since the original edition. (That is to say that the Greeks cooked their economic books and upset the Germans, whose tabloids demanded a share in the Greek islands, while Greek youths took to the streets as a million moustachioed Angela Merkels. Some Greeks actually lionised the National Socialists but that doesn’t really fit the narrative.) With a new edition to publish, Connelly skimmed like Superman across the surface of European life, and noticed that “the euro crisis had weaponised the stereotype”, perhaps indicting a need to prove that a posting in Brussels is as exciting as that of the warzones he had also visited. After arriving in Greece – we know this only because in the second last paragraph of the book he tells us that he did actually visit an ad hoc health centre in Greece in May 2013 – he clutches the weaponised stereotype to his chest, takes it back to Brussels where he changes back into his daily guise of mild-mannered reporter and then – according to the cover blurb – performs “a brilliant job skewering the lies and truths of European stereotypes”. This skewering, in truth, is more Don Quixote than bullfighter style.

It’s not a dreadful book, but it feels like it was put together by a team who weren’t really paying attention. (Every second page bears the header Dont Mention The Wars [sic].) On occasion it’s mildly amusing but the editor seems to have drifted off on arrival in Denmark, once the big, interesting countries were out of the way. Connelly has gathered many interesting vignettes in the course of his travels, but touches on interesting topics – such as the influence of Jewish humour in Germany or the disappearance of an ethnically-diverse Poland – without developing them, and there’s very little sense of overall coherence. The Dutch and Swiss are sadly missing and Ireland is present-but-absent. The reader comes away with the suspicion that the subject countries make the book only because the author was sent there for the ‘Six-One News’. Maybe Connelly is just too nice for this skewering business: this topic calls for savage wit and biting satire. As V.S. Pritchett said of Waugh, his work will survive as long as readers can savour the ‘beauty of his malice’.

That Connelly has mostly failed to generate any original exegesis of European relations during a 390-page meander suggests that we shouldn’t expect any incisive European national perspicacity on the evening news. It’s a shame. •