As Frank Flannery revealed as overpaid consultant to Philanthropy Ireland as well as chair of Forum on Philanthropy read Niall Crowley on the corruption of philanthropy in Ireland (July 2013, Village) 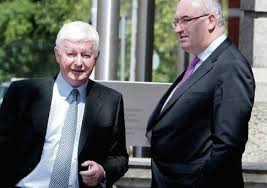 Worried voice. “The one percent difference?…Is this another tax?”.
Authoritative voice. “This is not a tax. This is something only you can decide on.” Still worried voice “So it’s definitely not a tax thing?”.
Even more authoritative voice. “The Government decides where our taxes go. This is yours”.
This conversation is part of the promotional video for the ‘One Percent Difference’ campaign. This reassurance actually takes up about 20% of the promotional piece. The campaign asks everyone to give one percent of their income or time to causes they choose to support. According to the promoters it is the “largest and most significant” public awareness campaign of its kind ever undertaken in Ireland.
Strange that such an anti-tax message should be funded by the Department of Environment, Community and Local Government. It is even stranger that this Department should be inflicting extensive and disproportionate cuts on the community and voluntary sector while funding this campaign to enhance giving from the general public. Is funding now to be privatised?
The ‘One Percent Difference’ video concludes, “It’s been proven. Giving is good for you. So, you are helping yourself too”. Philanthropy has always been good for you fiscally, especially if you are wealthy. If you give money to eligible charities you get tax relief on your income as a self-assessed individual or on your profits as a company. This is the sort of policy that contributes to the unacceptably low effective tax rates for corporations and wealthy individuals.
It’s going to get even better if Frank Flannery has his way. Frank Flannery is a one-time director of elections for Fine Gael, and now the chair of the Forum on Philanthropy and Fundraising. appointed by Phil Hogan (Minister for Environment, Community and Local Government).
Frank Flannery has proposed that “tax exiles” (always a strange and inappropriate title) should be given incentives to contribute to philanthropy in the form of extra days they can stay in Ireland. This of course makes the concept of “exile” even more ludicrous.
He has proposed that our “exiles” get an extra day at home for every 36,500 Euro they donate to charity, up to a total of an extra 62 days a year. His proposal, bizarrely, extends not only to “investment” in charities but also to investment in small and medium-sized businesses.
It is not clear from media reports whether he has the Forum behind him. This should make for an interesting dynamic if they choose to stand up to him. Michael Noonan, Minister for Finance, has, however, responded positively to the extraordinary and unethical proposal [ed’s note: in the end Noonan turned them down].
He believes it might be “an attractive initiative” and he thinks it will enable job creation. He has referred it to the Oireachtas Committee on Finance, Public Expenditure and Reform for consideration. This is the Minister that should be creating disincentives for those who elect to be “exiles” so that the exchequer has sufficient funds to make provision for the full range of civil society activities.
Civil society is sadly malleable. It feels it has to shape up to the funding available and, only then, look to what really needs doing in our society. The philanthropy of tax exiles will not, self-evidently, fund many campaigns for tax justice. The philanthropy of big business will not fund actions to develop a ‘de-growth’ agenda. The philanthropy of the wealthy will not enable an equal society.
The Revenue Commissioners reflect the narrow understanding of civil society evident in their tax exemptions to encourage philanthropy. The tax breaks they offer have always been for donations that contribute to the “relief of poverty”, the “advancement of education”, the “advancement of religion”, and “works of a charitable nature beneficial to the community”.
Many civil-society organisations stand for equality, environmental sustainability and participation. These values need to be the standard against which to assess the nature and sources of funding that can ethically be availed of. These values need to be deployed before Frank Flannery, Michael Noonan, and Phil Hogan ingrain the murkiness now widely associated with philanthropy; and before worthy and progressive organisations find that their funding has been privatised and the state abrogated minimal responsibility.