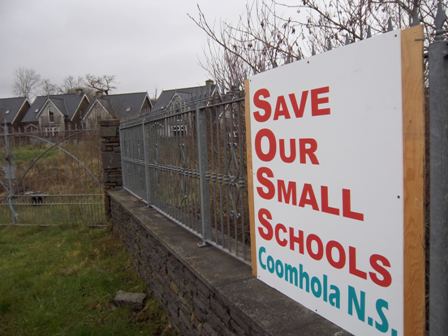 Simon Coveney’s Ministerial clearances of rural Ireland may prove to be more effective than his historic predecessors’. Not only will he remove the peasantry, he’ll clear out the land as well. [See the current May 2012 issue of the magazine to see an expansion of this analsysis which includes Coveney’s plan for mega fish farms.]

In an unexpected move that undercuts the reform of the Common Agricultural Policy, the Minister for Agriculture has required that hill farmers in disadvantaged areas must have double the old minimum stocking rate for sheep or face exclusion from payments. The EU has called for a move away from paying per head of animal as this encouraged overgrazing. Grant payments represented over 70% of national farm income in 2011.

Coming late in 2011 and governing payment through 2013, Coveney’s intention is to eliminate the ‘unproductive’ hill farmer. Horses have been excluded from stocking calculations as well. ‘This is not about telling farmers that if they do not increase their stocking rate they will not receive a payment, because farmers would simply increase their stocking rates’, he told the Dáil recently.

‘Some people who simply maintain land to get a disadvantaged areas payment and do the bare minimum with regard to keeping stock for the minimum amount of time will lose their payments, and this is the right approach when we have a reduced amount of money to spend. We must prioritise active and real farmers.’

In November 2011 Teagasc, the Government’s farm advisory service, announced that the number of ‘unviable’ farms has increased from less than a third to more than 40% from 2007 to 2010.

For ‘active and real farmers’, however, read agri-business – and insurance companies planting non-native trees that require high levels of fertilisation and receive both establishment grants and 15 or 20 years of ‘premiums’. Until 2007, EU support covered 75% of the bill, but Ireland’s stubborn refusal to change our forestry policy meant that we could not meet the minimum environmental standards. To make up the lost EU grant is costing us €42m a year in ‘premia’ payments – and growing.

By comparison, Coveney’s de facto change will cut the annual funding required under the Disadvantaged Scheme from €220m to €190, saving €30m. And it will hit the poorest hardest. For some, this will be the straw that broke the camel’s back. Rising fuel costs, property taxes, potential water and septic tank charges combined with this lose of income will push families into ‘negative income’ – if they are not already there.

Coveney is a scion of the Cork Merchant Princes. His brother, Patrick, holds an Oxford Doctorate in Management Studies and is under attack as chief executive of Greencore Group plc, the giant Irish food group, for his 2011 pay packet of €1.4m. Applying the business model to agriculture excludes ‘external’ environmental and social costs. ‘Biodiversity’ was estimated by the Department of the Environment in 2008 to be worth a minimum of €2.6 billion per annum to the Irish economy. This is ‘natural capital’ and is the foundation upon which our agriculture, forestry, fisheries and tourism sector depend, sustaining clean water, productive soil and clean air.

The price of the loss of biodiversity through agricultural intensification is only part of what is missing from the ‘business plans’ that determine small farms are ‘unviable’ and should be abandoned rather than supported. There is also the human biodiversity – the social cost of emigration, putting pressure on rural structures like schools and village shops in what becomes a self-fulfilling cycle of abandonment.

The Minister has set high targets for all farming sectors in his 2020 Plan. He speaks of ‘sustainable intensification’. He even went as far as to suggest that a return to the higher density stocking rates of sheep in these areas would be an environmental benefit, claiming ‘many mountainous areas are being under-grazed, which is doing as much damage as over-grazing.’ What does that mean?

It means that not only is Coveney clearing out the hill farmers, he is clearing out the hills as well. Wide spread protests over the last two years have been made about the ‘scrub removal’ in rural areas – the use of mechanical diggers to clear away areas that have gone ‘wild’ – as well as indiscriminate and uncontrolled wildfires as ‘land management’ to try and keep land ‘available for grazing’.

The Department told farmers that complaints from Eastern Europe – where area aid payments were docked for not keeping land ‘open’ after areal photography – were forcing their hand. A 2010 ‘health check’ of the Single Payment Scheme resulted in a new insistence that farmers include only “utilisable areas” for payment.

This meant that hedgerows which grew more than a metre into a field, overgrown tracks and previously abandoned plots were subject to ‘scrub removal’. While scrub removal can be argued as an appropriate management tool for maintaining lowland agriculturally productive land, it is environmentally devastating in the hills.

Many of these farmers were only part time during the boom, traditionally working off farm in construction. The ability of farming units to remain viable has already been seriously reduced by the economic downturn as farmers’ options in terms of finding alternative work have drastically reduced. Now, ironically armed with massive redundant earth moving equipment and the skills to obliterate anything, the community is alive with men trying to maximising the areas qualifying for grants. And it is not just the wildlife that is going – our built heritage is going with it.

As the traditional connection between the land owner and the land is eroded through intensification and expansion, the loss of archaeological monuments has been shocking. In the decade between 1990 and 2000, the Heritage Council estimated 10% of our national monuments were lost. In certain areas, ‘land clearance’ has resulted in the loss of more than 80% of the ring forts, a trend that Teagasc, the farm advisory body, warned in 2006 ‘is due to increase in the coming decade’.

An eminently sensible proposal is that the areas which had been overgrown and were reverting to scrub should be funded under the forestry programme. This was entirely ignored by the recent Forest Service Review Group and The Land And Forest Fires Working Group – probably because of embedded civil service rivalries between forestry and agriculture – and agriculture’s massive clout.

Scrub is a precursor of our native forestry and accounts for 15% of the national forestry inventory in certain counties. 20% of a forestry plantation can be scrub and still qualify for payment. Scrub can contain many native species, – hawthorn, blackthorn, gorse, juniper, bramble, roses, willows, small birches, stunted hazel, holly and oak. It provides unique feeding and shelter to bird and wildlife. Stone chats, wrens, thrushes, song thrushes and migrants such as whitethroats are specialists in this type of habitat. Its support offers the potential to allow for woodland regeneration on hillsides, river banks and bog margins. No fertilisation or drainage is required. Tourism, biodiversity, soils, water and carbon sequestration all benefit by reversion to scrub.

Simply moving the land that is reverting to its natural flora and fauna from Area Aid and funding it through forestry would remove the economic gain in ‘cleaning up’ these disadvantaged areas.

And there would be no reason to burn the mountains, a practice fuelled by inflexible administration. Wildfires destroyed 1,600 hectares of forestry last year – up from 1,200 hectares in 2010 – with an estimated value of €7.5m – not including the cost of fighting the blazes. Aside from the obvious biodiversity loss, these intense wildfires can lead to the sterilisation and erosion of the thin soils and have devastated many parts of rural Ireland over the last two years, putting lives at risk and tying up increasingly scarce emergency equipment and personnel.

The 2002 European Court of Justice Judgment against Ireland for overgrazing seems to have been forgotten. At the time, scientists said some areas would only recover ‘in geological time’. Ten years later Coveney seems intent on leaving a biodiversity wasteland – and once again forcing the emigration of the last small farmers that keep the hills alive.