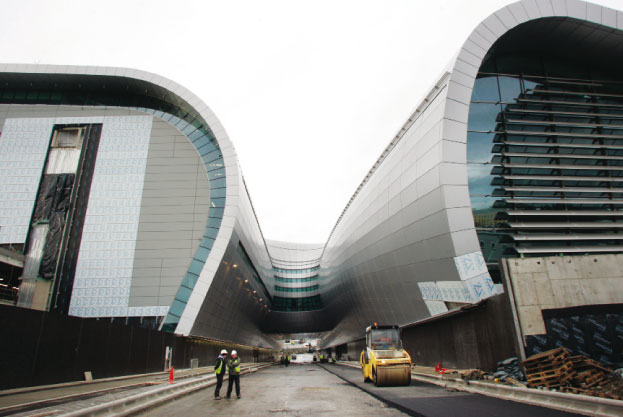 In another semi-State failure of cost-benefit analysis the DAA has developed terminals at Dublin airport with a 50% over-capacity; and has liabilities of around €1.7bn.
by Matthew Harley

We have seen that the DDDA operated under a development-driven agenda that had little regard for good governance and no respect for the concept of “value for money”. As a result, the taxpayer may be stuck with a debt of €400 million arising from the purchase of the Irish Glass Bottle site for which the DDDA cannot now even pay the interest. The DAA could hit the taxpayer for five times that sum.
The Annual Report for 2009 showed a sharp deterioration in group performance over 2008, with a loss of €13 million compared with a profit (after tax) of €47 million in 2008. The outlook for 2010 and 2011 is even worse. With its grandiose Terminal 2 at Dublin Airport opening for business in the next few weeks (November), the DAA is facing huge revenue shortfalls due to collapsing passenger numbers at a time when it will have to operate two underused terminals.

Together, T1 and T2 could handle double the current passenger throughput of Dublin Airport. Terminal 1 handled 23.469 million passengers in 2008, perhaps with some discomfort although the Area 14 extension opened in May 2007.  Terminal 2 is designed for 15 million passengers per annum (mppa). That is a total capacity of 38.5 mppa. In 2009, passenger numbers were down to 20.5 million and are expected by the DAA to be about 19 million in 2010. On recent trends, 18 mppa is a more likely outcome. Retailers too, in a depressed economy, may not pay projected rents. Management will find it very difficult, maybe impossible, to run the airport and repay outstanding loans. As debts accumulate further, the taxpayer may have to bail out the DAA.

In 2006, Brian Cowen, then Minister for Finance, increased the DAA’s statutory borrowing limit from the previous level of €0.7 billion to €1.8 billion to allow it to fund its ambitious €2 billion expansion plan. This was driven by the, “If I have it, I spend it”, Celtic Tiger, bubble-generating paradigm that then pervaded government thinking. In the same year he approved the DDDA borrowing up to a more modest €127 million towards the purchase of the Irish Glass Bottle site.

Debt will expand by at least €300 million to some €1.6 billion if the deferred parallel runway or the DAA’s now-preferred longer runway is built as the DAA continues to insist. Total debt may reach the approved €1.8 billion. This total does not include the deficit in the joint DAA/Aer Lingus pension fund, which was €700 million at the end of March 2009. It was estimated in 2006 that the DAA’s share of the then-estimated liability of €336 million, was 40%. The March 2009 €700 million deficit is believed to have fallen to about €500 million due to the improvement in equity markets. Nevertheless, a further €200 million must be added to the limit of the DAA’s liability (€1.8bn), bringing the total to a possible €2 billion.

In February 2010, Standard and Poor’s Rating Services downgraded the DAA’s credit rating to BBB+ because of falling passenger numbers, which it expected to decline further in 2010 and weaken the authority’s financial position. Their report even said there was a possibility of extraordinary Government support being provided.  Ryanair’s Michael O’Leary thinks the DAA ”is going to go bust” and will ultimately “fall back on the State”. Declan Collier the DAA’s CEO has vigorously denied this.

The DAA was warned about the potential non-viability of Terminal 2 by the Portmarnock Community Association and Ryanair, but these opinions were derided and ignored by the authorities, including An Bord Pleanála.

Questions were asked repeatedly in the Dáil and representations were made to ministers on behalf of the PCA (mostly by Trevor Sargent TD and Terence Flanagan TD) about the failure of the DAA to undertake the Cost Benefit Analysis (CBA) required by Government investment appraisal guidelines, which is the official test of the sustainability of proposed large-scale public investments.

Another claim often repeated in these replies is that, because passenger charges eventually pay for these new facilities, there are no public funds used. This is not correct. These investments consume public resources. For example, the proposed new runway will take up 840 acres of public land whose value was ignored in costing the runway. Passenger charges do not include any payment for land used. Even in the present depressed land market this land could be worth €1 billion. These public resources are equivalent to tax revenue foregone and the taxpayer should earn a rental for their use. Furthermore, as the DAA is a state body, taxpayers are ultimately responsible for its debts, as they are for the DDDA’s debts. This could mean huge and direct exposure for the taxpayer, of perhaps €2 billion. But this truth is twisted in ministers’ replies that claim there is no recourse to public funds.

The Commission for Aviation Regulation (CAR) had consultants carry out a CBA on the main investments planned by the DAA (new parallel runway and T2). It came to a negative conclusion even though the analysts hugely understated the capital costs and counted too many benefits. Furthermore, land to be used up was valued at zero opportunity cost and no externality costs (e.g. noise, noxious emissions, road traffic congestion, global warming etc) were counted. Under pressure from the DAA and the Minister for Transport, the CAR did not complete the study but spun the negative preliminary conclusions so as to allow it to approve the DAA’s investment, even though it was clear, had the study been completed and corrected as the consultants themselves proposed, the final results would have been much worse. Here again is an example of a critical failure of governance. Had the work been completed it would have shown the poor quality of the proposed investment, but improper pressure led to a failure to complete the analysis and a fudge of its preliminary results. This is another clear case of the rot that pervades the governance of our commercial semi-State bodies, which will persist until we have independent evaluation.

The failure of Ministers to insist on a proper application of Government appraisal guidelines by all State agencies is a clear example of the “disconnect” or lack of accountability by Government for State agencies that was identified by the OECD in its 2008 report “Towards an Integrated Public Service.”

This same failure of governance has brought not just the DDDA, but also much of our public service, near to ruin. Former DAA chairman Gary McGann was also on the board of Anglo Irish Bank which financed construction  with reckless abandon and demonstrably inadequate assessment, leading it to declare the biggest annual loss in Irish corporate history and the worst losses of any bank in the world two years running, imposing an irrecoverable cost to the taxpayer of at least €25 billion that threatens us with economic ruin. McGann resigned as DAA chairman in March 2009. Like the DDDA, the DAA under his chairmanship “paid little attention to value-for-money considerations in its work” and the government has refused to insist that the DAA and all state bodies strictly follow government guidelines on value for money.

We need to have a radical overhaul of the governance of all our commercial semi-State bodies if we are properly to reform the public service and make it fit for purpose.

Matthew Harley is a member of the Portmarnock Community Association