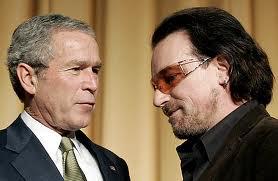 Could I write something, the Village editor asked, “about the difficulty of getting The

Frontman considered in Irish (and other?) media?”

And already I can hear the dry laughter of other writers, who can only dream of such “difficulty”. I was interviewed about my critical book on Bono twice in one day on TV3; I had outings on Today FM, NewsTalk, 2FM, US public radio and Cape Town drivetime; there were full-page reviews and stories on news pages to boot; two heavy-hitters of the left, George Monbiot and Terry Eagleton, praised the book in the Guardian.

I don’t start from any sense of entitlement to publicity — my previous book, a labour of love about the Pitstop Ploughshares, got almost no coverage at all and sold, modestly, through activist networks. So you’d think I’d be happy with what I got for The Frontman.

I am. Yet there was “difficulty”, and some of it was interesting. While no one in the media is prepared to say that Bono personally should be considered above reproach, I suspect there is élite defensiveness about what he represents, which is the self-evident, unquestioned virtue of the “good cause”.

This summer, Warren Buffett’s son Peter turned whistleblower against his own class of super-rich donors with a great piece in the New York Times about “the Charitable-Industrial Complex”. He wrote: “Inside any important philanthropy meeting, you witness heads of state meeting with investment managers and corporate leaders. All are searching for answers with their right hand to problems that others in the room have created with their left”.

Bono is, in my portrait, the global mascot, the cred-conferring frontman, for this class of alleged do-gooders who are actually responsible for much of the world’s exploitation, violence and inequality. If your newspaper is owned, or your radio show is presented, by someone famed for his ‘great work for charity’, this may be a hard message to take lying down.

Publishers Verso had good, professional PR people working to promote the book in London, New York and Dublin. All of them kept telling the same repetitive story about their efforts, a story they said was unusual: enthusiasm from reporters and researchers, then red lights higher up, from editors, producers and presenters. Even getting a launch venue in London proved difficult.  (London was just unlucky too: both the interviews I managed to do there saw the journalists’ audio equipment break down.)

Verso thought it had two different newspaper-extract deals in place: both of them failed to result in published extracts once the decision reached the most senior level. When a somewhat garbled account of the no-extract decision at the Irish edition of the Sunday Times hit the Phoenix, it probably cost me my previous good working relationship as an occasional writer for that newspaper, though in fairness the ST did later publish a smart and balanced news story about the book.

Is all publicity really good publicity? Bill Clinton, Gaybo, Adi Roche and Gavin Friday were quoted attacking the book sight unseen and the reviewers at the Sunday Independent and Irish Times weighed in with usual and unusual bile, respectively. The Evening Herald ran a gloating, almost-accurate piece about the book’s rather poor Irish-bookshop sales, figures that were not surprising given that most shops seemed to hide it away as something shameful.

But who was I to complain? I am a sometime critic who has written a book that is not without its vicious moments, but who is now, briefly, at the receiving end. When I have a sleepless night, I find myself wondering: how many of them have I caused for other people over the years? Like Springsteen sings: “My faith’s been torn asunder / Tell me, is that rollin’ thunder / Or just the sinking sound / Of something righteous going under?”

But if my righteousness is sunk, I’ve still got something left, thanks to the people who come up to shake my hand or tweet or email me to say that the book helped them to think a little differently about power and how it is wielded. And I’ve still got, heaven help me, Spanish and Italian editions of The Frontman to look forward to in the coming months. You know, I hear Bono is really loved in Italy, Spain and Latin America…