Before then Dr Pat Wallace was notable mostly for his heroic record on the controversial Wood Quay archaeological dig from 1974 when speaking truth to power he took over the excavations at the tender age of 25, an honour he described variably as like “winning a £2 million scholarship” and a “sink or swim situation”.

The son of a blacksmith from Askeaton in Limerick, Wallace had earned a scholarship to University College Galway after achieving the highest Leaving Cert results in Limerick for 1966.

He later became Director of the National Museum and was a competent and articulate exponent of the archaeological agenda, standing up robustly against other national bodies for the sites in Tara, Woodstown and Carrickmines, in the teeth of aggressive road plans, for example.

Hailing from a staunchly Republican background, Wallace was long a supporter of Fianna Fáil and laid the praise for the completion of a new campus in Collins Barracks at the feet of the Taoiseach of the day, Bertie Ahern.

On the day of the opening of the Museum at Collins’ Barracks, however, the IMPACT trade union orchestrated a one-day strike which had the effect of keeping the Taoiseach away from the gala, as he refused to cross the picket in his own constituency of Dublin Central.

The move to the Barracks had cost upwards of £30m, attracting scorn from some within the organisation who suggested that the premises itself was taking precedence over the artefacts it was ostensibly in service to.

Wallace retired in 2012 after 24 years as Head of the National Museum.

Wallace’s name came up again in a November 2017 postscript to a blog post originally uploaded in February 2017. Here, he was implicated as presiding over a “toxic” and “hierarchal” culture of “privilege” in his time as Director of the National Museum of Ireland by archaeologist and blogger Adrienne Corless, who described not only being bullied by Wallace but being sexually harassed on several occasions by her immediate superior, who she now felt ready to identify as Andy Halpin.

Halpin, she claims, had touched her inappropriately on several occasions while she was working under him at the museum. Repeated informal complaints to HR had had little effect, as following only minor castigations Halpin would continue his harassment of her even having been moved on to other duties, according to the Irish Independent.

When Corless finally initiated a formal complaint against Halpin, he confessed that he viewed her as a “foil for his fantasies”. On one occasion after seeing some “tall school girls” and wanting to “prolong the fantasy” he pushed her against a door to “measure [her] height”. 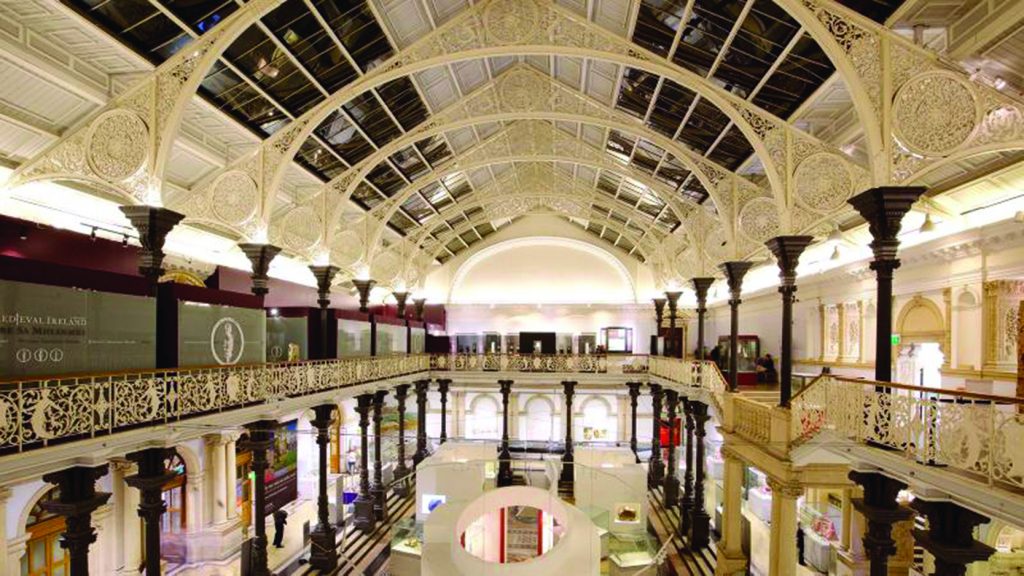 Corless describes how she waited impatiently for news of Halpin’s admonishment at the hands of Museum management, only to be told upon phoning the HR department herself simply that they “had implemented the disciplinary code”. HR would not speak further as to what in practice this implied, and so it fell to Corless herself to look up the code and determine that, in fact, “he [had] received the softest possible reprimand”.

Corless feels that Wallace knew about Andy Halpin’s behaviour, as it had continued unabated with other women before and after her experience with him, but had “thought that the Civil Service systems in place would take care of the problem of Mr. Halpin”, in spite of her “foolish” hope that Wallace “would say or do more”.

In fact, she recalls an instance after she reported Halpin to HR where Wallace allegedly “chuckled to another senior manager” that he never thought “Halpin would have had it in him”, as if he saw her formal complaint against Halpin as a ‘badge of honour’.

Some time after the HR complaint, Corless was offered Halpin’s former position, although Halpin was retained by the museum in a different capacity.

Now without a department, Corless came to operate directly under Pat Wallace himself, whereupon his abusive and “bullying” behaviour towards her began to take shape.

Wallace’s maltreatment of Corless is exemplified in an episode she relates in her blog post of February 12 2017:

“At a social occasion, in front of horrified friends from outside the organisation [the National Museum of Ireland], he told my partner in a seemingly jovial way that he’d better not get me pregnant again”.

This came following an incident in which Corless phoned to discuss upcoming maternity leave, and was “angrily” lambasted by Wallace who told her it was not his fault she was “up the pole”.

This attitude appears to have been serially manifest in Wallace’s dealings with subordinates within the National Museum.

Corless describes how “Higher Managers would pale before visitations of [Wallace]”, and how the “entire organisation” remained in a state of constant fear and anxiety over his appearances.

In a more recent blog post in January of this year, hosted on the blog site of Grace Dyas who last year initiated the campaign against Michael Colgan’s harassment of women during his tenure as Director of the Gate Theatre, Corless relates the account of a Danish undergraduate student interning at the National Museum. Nina Vodstrup Andersen similarly alleges she experienced sexual harassment at the hands of Andy Halpin, as well as verbal harassment by other, unnamed staff members.

Among them was Director Wallace himself, who she claims cornered her in a dim corridor one day and, “in a tone of voice laden with sexual glee”, accused her of having an affair with her supervisor, commenting that “You Scandinavians are all the same” before walking off.

Wallace claimed that his departure from the directorship of the National Museum in 2012 was a result of being effectively forced out by the realities of pension and salary cuts implemented across the board of the public sector in response to the financial crisis.

Speaking to the Irish Times after announcing his plan to take early retirement in February of 2012, Wallace claimed he was “ambushed” by the government’s overhaul of public sector pay and that he’d become “exhausted” trying to fight back against successive cuts to budgets that it negatively affected the National Museum.

But Corless alleges in her February 2017 blog post, entitled ‘A Workplace Fable’, the National Museum appeared to exhale a long pent-up sigh of relief upon Wallace’s early departure.

Following the repositioning of her immediate superior, Halpin, Corless was left working on what she describes as a “pet project” for Wallace, bringing her, as she relates, “out of the frying pan and into the fire” of his wrath and explosive temperament.

Nobody in the post-Wallace era wanted “anything to do with his legacy”, by her account.

Bullying continued at the Museum after Wallace left.

In November 2016 the ‘Work Positive Profile Management Report’ claimed: Over 40pc of staff at the National Museum of Ireland are at risk of developing anxiety or depression; one in five employees at the institution are ‘often’ or ‘always’ subjected to bullying; another 20pc are “sometimes” the victims of bullying; one employee complained of having to deal with ‘bullies and perverts’ and almost 70pc of respondents feel employee morale is poor to very poor.

The Museum claims to have acted on the report by setting up a Museum Council and improving communication.

Wallace’s tenure had previously come under fire in a damning 2008 report from the Comptroller and Auditor General that showed “highly unsatisfactory” levels of regard for the museum’s collection as far back as 2001.

The National Museum was found to have “no comprehensive record” of its collection of some 3.8 million historical items, posing them a “significant risk”.

As well as cataloguing shortcomings the report also found that many of the museum’s artefacts were kept in “poor or very poor” conditions, contributing to a risk of damage or destruction through variations in temperature or humidity.

According to an Irish Independent article printed following the report’s publication, a test search for 59 randomly-selected artefacts only brought up 68% of them, with 13% mislabelled and misplaced and 19% unaccounted for entirely.

Management, then under the direction of Dr Wallace, was said to have had a “limited” response to the report.

Blaming the deficiencies in the National Museum’s operation on a staff shortage, Wallace commented that he “regretted that it was not possible for the report either to give credit to how far the museum has come or to adequately contextualise deficiencies which are due to shortages of resources”.

Wallace wriggled and nobody seriously held him to task. Wallace has been a media darling since his ascendancy over Wood Quay. He has been a regular guest on the Marian Finucane Programme, and other mainstream chatshows, down the years, even before he took to ‘Gogglebox’.

Wallace eluded responsibility for delinquency in curation of the national patrimony, it remains to be seen if the media will observe a similar discretion over repeated claims of harassment, including verbal indiscretions of his own, during his time at the National Museum.