The National Assets Management Bureau (NAMA) has written off €300m in debts for 23 major property developers, we hear. It has been reported from several quarters that representatives for the Quinn family and the Irish Bank Resolution Corporation (IBRC) are currently negotiating a settlement of their €4.5bn case against the former Anglo Irish Bank and the Irish state. According to the Sunday Business Post (March 29th) the Quinn family could, under the terms of the negotiations, resume control of hundreds of millions worth of property and other assets.

Bust developer Sean Dunne is currently involved in a $14m (€12.9m) construction project in the US, a bankruptcy official has alleged. Dunne has almost €700m in debts, but is still living the lifestyle of a millionaire and has allegedly been using companies registered in his wife’s name to continue developing property.

Meanwhile, figures from the Court Service show that 7,000 repossession cases are pending. These come from a pool of 30,000 home mortgage defaulters – not all in the Gorse Hill set – who must wait for the banks to decide their fate.

The owners of the banks, the citizenry, either can’t get a loan or are subject to new tighter rules if they do, while those who ‘disappeared’ billions of euros are being rewarded by write-offs, write downs and right eejits.

The humourless new rules will whip the little people into line for losing the run of themselves during the boom. First-time buyers, the most innocent party of all, will do whatever it takes to scrape together the 10 per cent deposit to qualify for a 90 per cent loan on a property valued at €220,000 or less, a tall order if you are living in Dublin. Furthermore, the amount to be borrowed cannot exceed 3.5 times their income; impossible if you are one of the ‘working poor’.

It’s like ‘Brewster’s Millions’ – squander one million to keep seven million, except this time it’s not fiction, its fact and its billions instead of millions. We have reached book three of the trilogy – The Return of the Developers. It’s happening again in banks and offices all over Ireland; heroes are returning to continue where they left off.

The hero has a particular life-cycle, and Joseph Campbell, the 20th-century American mythologist and scholar, summarised this heroic sequence in a famous book called ‘The Hero with a Thousand Faces’. A ‘hero’ abandons his routine or normal existence and enters a world of uncertainty. He fights many adversaries for survival and emerges victorious. Finally, he returns home with new-found powers to bequeath blessings on those he left behind.

Here’s a local adaptation of Campbell’s heroic sequence. A property developer or banker realises that his avaricious, hedonistic and spendthrift behaviour has got him into a bit of bother. He must flee the country and keep his head down in some luxury foreign resort, pining for home and avoiding the newspapers as he swings his golf clubs and swills chilled prosecco. While enduring the harsh life of the exile his mates, and advisors, keep him abreast of developments back home.

When the time is right he will metamorphose from a poor emigrant to a property developer again. Sure aren’t most of his debts written off and aren’t the people of Ireland crying out for him to return and build much needed houses? With asking prices rising by 2.2 per cent nationally in the first quarter of 2015, it’s his duty to convert them from renters to home owners, to give something back. It all comes to him in a dream.  It was thus with St Patrick.

Of course modern Irish mythology, aided by seanchaí David McWilliams, created its own heroic types. The bit-part players were the house-buyers and breakfast-roll addicts; the toadies were the financial institutions, some elected representatives – and, many would say – certain sections of the media; the acolytes also came from sections of the financial, political and media world. Their heroes were the builders, the developers and their financiers, whose swagger was a foil to the cowardice and ineptitude of those who should have known better. Their disdain for the humble PAYE workers equalled Coriolanus’ disdain for the Roman plebeians:

“What’s the matter, you dissentious rogues,

That, rubbing the poor itch of your opinion,

The names of individual heroes are already immortal and each reader will have a favourite. The likes of David Drumm, Sean Quinn, Sean Dunne, Sean FitzPatrick (so many Seans) and Johnny Ronan will be exam revision material for a future generation. The waste-laying Fianna Fáil-Green coalition government will be neo-Cromwellians for our credulous descendants. 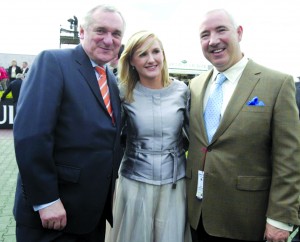 Isn’t it just Panglossian to recollect that the 22 builders of destiny, the speculating wing of FF and FG, armed with wrecking balls and cement mixers, had borrowed €25.5bn between them? €8.8 bn of this was used to buy development land. This is what was uncovered by the PwC report into Irish financial institutions commissioned by the Central Bank after the bank guarantee in 2008. One can only imagine how close to Hitler’s bunker that room in government buildings was on bailout night in 2008.

Ireland’s government and central bank acted as a money factory for these touts. So called ‘officials’ were in the piddling halfpenny place compared to these peddlers of builders’ rubble.

Having lain low in abject luxury while passing themselves off as ‘victims’ they are now weaving themselves back into the fabric of Irish society. Sean Quinn’s return to his Cavan-Fermanagh border principality in January is rivalled only by Caesar’s return to Rome after conquering Gaul. This was made possible after a local consortium paid €100m to the Aventas Group, which took over when Quinn Inc. went kaput, to buy back a substantial slice of Quinn’s old empire. All may soon be forgiven for all that offshore-y, Russian-y confusion, though Judge Peter Kelly had meanly said that in all his years dealing with “fraud and chicanery” he had never seen anything like the Quinns. But things are looking up again for Team Quinn. That didn’t take long, did it?

A much-celebrated player who looks like he’d keep a dagger in his toga is Johnny Ronan. Fresh from bankrupting Treasury Holdings with debts of €2.7bn, €1.7bn of which was owed to NAMA he has finalised a deal with two multi-billion dollar funds, Colony Capital and M&G to secure his leave-taking from Nama.

Between them they will pay over €250 million to buy out Ronan’s personal debts of over €290m. The Sunday Independent cannot get enough of it. Most ludicrous though, is the fact that Ronan and fellow developer Paddy McKillen recently refinanced debts on the Treasury Building wherein resides the headquarters of Nama.

Ronan is also the largest shareholder in Connaught House, which houses the former Anglo Irish Bank. This is the stuff of Lewis Carroll’s ‘Looking Glass’. More ludicrously again, in view of the geopolitics, the deal is backed by Deutsche Bank.

It seems that you never pay for your misdeeds in this story; you just sit back and wait for the gods to smile on you again.

Meanwhile the radical left, rather than picketing the Treasury Building, Avantas and Gorse Hill is diverted dealing with  a crisis generated by… water charges.

In March 2014 a report by the Housing Agency revealed that 80,000 residential units will be required over the next five years to meet the demand for homes. It won’t be long before the country is overrun again with whistling bricklayers, bouncy castles and the Château de Chasselas. With ne’er a lesson learnt. •