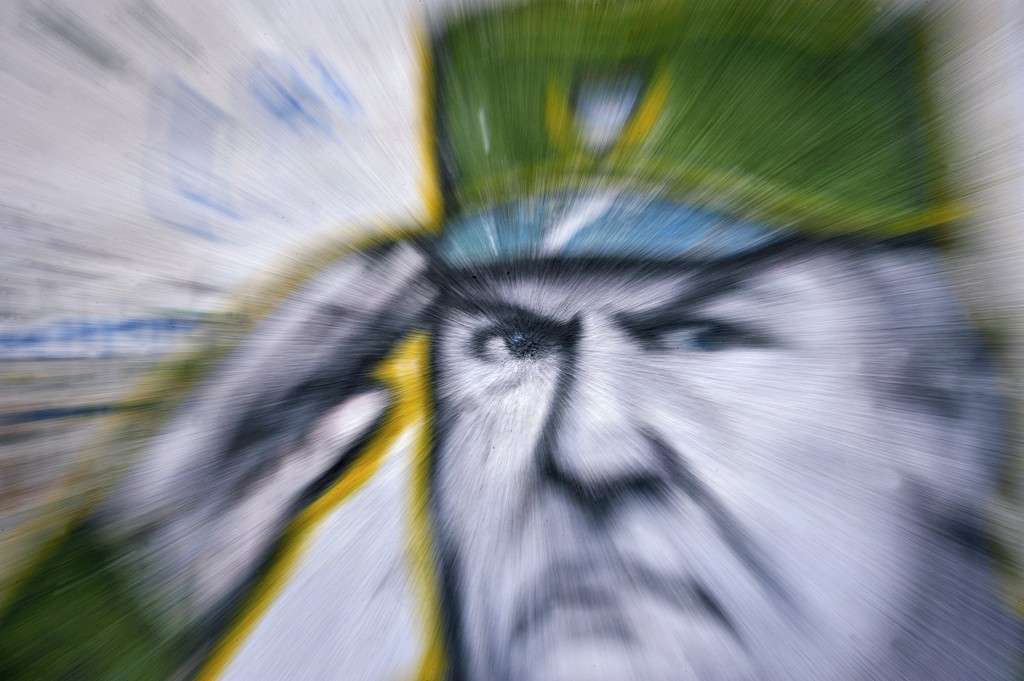 On the 12th of October the European Commission flashed a green light at two of the possible six Balkan candidate countries hoping to become our newest EU neighbours.
It may have passed the Irish by (Ireland has no embassies in these states) but, as the Presidential candidates slugged it out again on TV, the results of the ‘Progress Reports’ for the aspiring EU member-states were announced in Brussels.
For the remaining countries of Former Yugoslavia, plus Albania, these Progress Reports are the equivalent of the school report for the year gone by.
Slovenia is already in, as part of the last round of candidate countries, and Croatia just got approval. This year’s ‘winners’ were Serbia and Montenegro, the former being recommended for Candidate Status – without a date for opening of negotiations – and the latter being recommended for a date to actually open the Negotiations; the penultimate step to Accession.
Drive-by: Belgrade graffiti of former Bosnian-Serb military chief Ratko Mladic, saluting

For Serbia the political heavy-lifting that was required to deliver wanted war criminals Mladić and Hadžić to the Hague Tribunal all but guaranteed a shoo in.
Never mind that in the intervening period there has been open conflict, leading to deaths, on the Kosovo border.
Or that Serbian politicians including the President and the Minister of Foreign Affairs – who was recently given a much-deserved grilling by an Oireachtas Committee – have regularly been active in the Majority Serb part of Bosnia, in a manner which is at best unhelpful, if not actually destabilising for the very survival of the Bosnian state.
Or that in mid September President Boris Tadić said that a Gay Pride parade was being prohibited in Belgrade “to protect LGBT persons” -though one had been held and well protected last year, when Serbia was badly in need of some political gesture to burnish its ‘European values’ in the absence of the hotly-demanded arrests of Messrs Mladić and Hadžić.
Montenegro was, less than a year ago, given a check-list of seven criteria which had to be met, High on the agenda were rooting out high-level corruption; freedom of expression; and independence of the media.
The current Progress report for Montenegro almost glows about the advances that have been achieved, but surprisingly fails to mention a video tape which recently surfaced showing a state official from the national intelligence agency and the ex-Prime-Minister Milo Đukanović’s head of security, fraternising at a wedding with some of the most notorious drug mafia figures from the region.
Or the continuing low-level state intimidation of NGO watchdogs, or the on going – and unsolved – attacks against journalists and media.
Perhaps most significantly of all the Progress report lauds the arrest of a Montenegrin Municipal Mayor and his colleagues for charges of “High Level” corruption, without making any reference to the fact that ‘every dog on the street’ down Montenegro way knows that this case had more to do with former Prime minister Đukanović neutralising an internal political rival than with a new-found thirst for tackling high-level corruption.
But the Commission is a funny old beast and the very title of its yearly review “Progress Report” has a quasi-communistic “Five-year plan” feel about it. Having lumbered themselves with a reporting mechanism that always looks on the bright side of life, this year’s report necessarily – in the current dire climate – needed to deliver some good news somewhere on the European radar to avoid “enlargement fatigue” if nothing else.
The problem for the EC bureaucrats was that amongst the ranks of those who might “Progress” we had Macedonia hampered by an almost certain Greek veto over a name dispute; Albania, whose opposition had the temerity to question election results and boycott Parliament; Bosnia, whose political system is in a terminal spiral as the EU has taken its eye off the ball and Kosovo…well that’s another story. This has left Serbia and Montenegro as the only possible candidates for progress.
No doubt realpolitik drives much of this but what message is the Commission sending to countries in the Balkans when Serbia – the architect of ethnic cleansing in the region, and Montenegro – arguably one of the most corrupt countries in the region, alone are moving forward in the EU accession stakes?

Garret Tankosić-Kelly lives in Sarajevo, the capital of Bosnia and Herzegovina, and has worked in the region for 15 years.