‘See nothing’ or ‘do nothing’ about structural problems: the EU wrongly sees only “liquidity” problems in “peripheral” states. By Constantin Gurdgiev 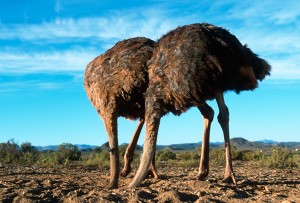 Perhaps nothing defines the detachment from reality of European (and Irish) élites than their own statements. Like proverbial ostriches with their heads in the sand, the official responses to the current crisis have been oscillating between two extremes. On the one side, there is the extreme of ‘do nothing’ about the structural causes of the unfolding financial catastrophe – the ‘kicking-the-can-down-the-road’ policies of the ECB, Ecofin and the member states. On the opposite side, there is the extreme of denying the catastrophe itself – ‘ see nothing’ – that is evident in the policy pronouncements from Brussels and, most recently, in the debate here.
The ‘do nothing’ response by Brussels and the member states, like Ireland, is embodied in the policy platforms adopted over the last three years. It is further reinforced by the soaring choir of ‘Hope will set us free from the crisis’ analysts who push forward an argument that, with just a little tweaking here and there, the Titanic of the debt-financed Euro zone will be able to sail on.
The core policy documents published since 2008 by the EU Commission have virtually nothing to do with the crisis Europe is facing. The flagship EU programme unveiled during the crisis is an aspirational tome called Europe 2020. This envisions not a path to resolving the problem of debt overhang in the ‘peripheral’ countries but a grandiose scheme to jump-start the EU’s knowledge, green, and social economy.
That Europe 2020 is an idea that is neither new, nor workable is highlighted by the fact that most of the platform proposals date back to the failed and abandoned Lisbon Strategy (2000-2010), Social Economy Europe (a zombie policy lumbering on since 2000) and a long line of knowledge-economy strategies aggressively promoted by the EU over the last decade. Even over the boom years of 2003-2007, these delivered virtually nothing.
‘See nothing’ is predicated on the political timetables of local and national elections in Germany, France and elsewhere across the EU. As a result, political rhetoric is being used to combat economic reality. The economically artificial deadline of 2013, the much-hyped hope of Portugal, Ireland, Italy, Greece and Spain (‘the PIIGS’) returning to the bond markets and imposing burden-sharing on the banks lenders (in the case of Ireland) and sovereign bondholders (in the case of Portugal and Greece) serves as both the goalpost to be reached and the deadline for the end of the can-kicking. The circularity of this 2013-or-bust argument is compounded by its surrealism. By 2013, the entire debt burden of the PIIGS will be carried solely by their central banks, the ECB and the Governments. Put simply, if debt default comes after 2013, it will be default of the worst imaginable variety –sovereign default.
In the mean-time, as the debt crisis ravages the Eurozone, Brussels, Frankfurt, Berlin and Paris continue to deny the true extent of the problems we face, though Angela Merkel has at least recognised recently that the problem is a “debt crisis”. Hence, instead of finding the means permanently to reduce debt burdens accumulated across a number of EU economies, the Union pushes forward a solution of writing even more debt against already over-indebted countries. Behold EFSF/EFSM (don’t ask) and their ‘permanent’ off-spring ESM (European Stability) which will come into existence… yes, you’ve guessed it right… in 2013.
The most amusing vehicle for this denial is the EU’s terminology. As you’ve heard, the Euro area is experiencing ‘liquidity problems’ in its ‘peripheral member states’.
Never mind, the terminology seems to imply, that the liquidity problems – the phrase evokes some sort of temporary hiccup – are a full-blown debt crisis with a number of countries effectively frozen out of the bond markets and large swaths of the Euro-area-wide banking sector left unable to function as banks. In 1991, Euro area members’ gross government debt to GDP ratio was just under 54.1%. By 2007 it had risen to 66.2% of GDP. That was pre-crisis. At the end of 2010 the same ratio reached 85.04% and it is now projected by the IMF to peak at 88.4% in 2013. Since 1991, levels of real indebtedness across the Euro zone have grown annually by 2.26% in excess of economic growth. The chart above, based on IMF data and forecasts, illustrates this.
Next, take a look at the ‘periphery’ label attached to Portugal, Ireland, Italy, Greece and Spain. In 2010, its ‘periphery’ accounted for 35% of Euro-area GDP, 40.5% of its population and 40% of the total gross government debt. I doubt any US administration would ever be arrogant enough to call, say, the States west of the Rockies the ‘periphery’.
The crisis, faced by the EU is a structural one, which means it is long-term in nature and not resolvable by simply sitting and waiting for growth to come. And it is not being helped by those who deny it – be it Brussels politicians or Irish economists and ‘green jersey’-sporting commentators.
Let’s face the facts, while using our own situation as an example of what is going on across a number of other European economies.
Having digested the fact boxes, you must either assume that all these losses, if they materialise, will be covered by a fairy, in which case no contingency provisions should be made ahead of them crystallising. Alternatively they will be covered by the Irish taxpayer, in which case some forward thinking is required.
Whether by our own design or by the interaction of complex forces of politics and economics (and I prefer the latter explanation) we are now caught in an EU-wide crisis of unprecedented proportions. Instead of praying for a magic solution and sitting out this crisis, we need a credible plan. That plan must start with analysis of the problems we face – problems of debt overhang, not liquidity shortages; and of lack of real-growth drivers, not lack of knowledge/green/social economy strategy papers.
But ultimately the crisis is the lack of realism. Markets favour those who come prepared, not those who come pretending that all will be fine because they say it will.