“They are from everywhere – from Asia, Africa, Europe”. Thus a North Ken resident in reaction to the horrific fire in its poorest quarter. And – in deference to his interviewer: “The Irish Diaspora is here…”.

In my day, all of fifty years ago, there was no talk of ‘The Irish Diaspora’, that grand term. We were emigrants from our home country, economic exports of a failed state, now scarpering along the shortest run to jobs, in Blighty.

About 50,000 per year exported ‘on the hoof’ of mail boats. That was the same number of cattle as humans in those years of what historian like to call Mass Emigration.

Two bells for Archie to pull out of cavernous Middle Row garage, then down through Ladbroke Grove, along Bishops Bridge Road, by the side of Paddington Statio., left into Praed St, a right turn into Edgware Rd, left at Marble Arch, through Oxford Street, down into the city and majestic St Pauls’…then via the curve of the Thames to East End. I couldn’t say I loved it but I certainly came to know it, to understand it. Love came later, viewing those images which take us back…

Most passengers going West-East were commuting to offices off Edgeware Road or worked in the shops along Oxford Street, C and A at Marble Arch, then successively Selfridges, D H Evans, largely patronised by middle class shoppers as M and S had yet to make a large store impact up past John Lewis with some maybe even to Liberty.

Nearing Tottenham Court Rd, the shops fronts became tackier, as it was effectively the corner of Soho.

On the return journey we often picked up little Laskars, families of sea militiaman from east of the Cape of Good Hope, who were lithe and physically compact from work on ships, dusky in colour with exotic skin and perfumes of – far away…At nineteen I had known only the earthiness of Irish and English, but all races came to London. Making a life at the heart of that city at that age was as good as a continuing world cruise.

London Transport had put us, about a dozen Irish, in Paddington ‘digs’, a terraced street of two-up, two downs. The crabby landlady made us evening tea, complaining about the war shortages. Being Irish our ignorance had been ring-fenced by De Valera, keen to make us Gaelic, Irish, even keep us Catholic. It all made us Oirish in the eyes of the natives: appearing to them as sad, lost and untrustworthy from our lack of support of our neighbour during what we had called ‘the Emergency’.

The landlady remembered that war, and reminded us. On her twice weekly excursions to bingo, she locked the black bakelite hall phone in a suitcase, against us. When it insistently rang, one of the lads would shake the case to dislodge it. She warned us about what priests had called ‘nocturnal emissions’ which she rendered as: “ Now boys, no finkin’ of vem blondes in yeh bed – I’ve enuff wiv changin’ yer sheets every week, wivout ‘avin to bleach yah stains…”.

In time we learnt to scour the notice boards in newsagents.

And yes, I do remember “No Irish, no blacks” though I cannot swear to “No dogs”. I got a ‘shared room’ with an Irish countryman who was quietly hospitable until I came in with too much alcohol. He was a long-term tenant, wore a pioneer pin on a serge lapel and his house proud Irish landlady exclaimed more in sorrow than anger that a new lad like me peeing in the bed because I could not hold my drink would have to “look elsewhere”. I was gone.

North Kensington itself was an instant education, where a Corkman Pat, yes Pat, also on the buses and I managed to rent a ground-floor flat in Ladbroke Crescent, in a corner house by Rillington Place where – as I later learned – necrophiliac murderer Reg Christie serially strangled women, had sex with their expiring bodies and boarded them, standing up, between stud-walls which he wallpapered to conceal their load.

I was as ignorant of that as I was of the home reality of Britain’s war until I read, many moons later, Ludovic Kennedy’s 10 Rillington Place, which set out forensic details of how a malign Christie blamed another lodger Evans. You wouldn’t do that to your fellow lodger. In the great tradition of British Justice Evans was tried, found guilty and hanged.

That reality was unknown then, but somehow the evil was sensed. I recall a conversation with a woman owner of a small tea place where she managed to keep an urn and cups turning over with horse-piss tea. “Ahh that Reggie Christie” she said, “Often in ‘ere, chattin’ up the gels…”.

Then as now North Ken contained a certain volatility. A few years before, race riots had blighted the area. Teddy Boys, those exotic displays of British ‘working class’ resentment, menaced the area, hunting down Caribbean male immigrants, who had been recruited for the buses and tubes. There were bad incidents down the road in Shepherd’s Bush. Contrary to some impressions, the records show The Met tackled the trouble-makers, though they were notable by their absence one night I returned to Ladbroke Crescent, with new found teacher friends dropping me by car. 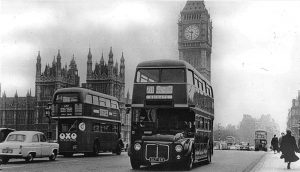 Suddenly finding ourselves surrounded by white thugs, I managed to get a window closed even as a fist slammed into it. Frightened into driving away, we were powerless to prevent what, looking back, I could see happening – a steel girder on the flat back of a lorry was repeatedly ramming into the ground floor window of a house occupied by screaming black families. As the front of the house shattered, cheers from the crowd celebrated the absence of police, the absence of British fair play.

We did not hang about and I have no memory of what transpired in later days, though the records show that a Labour government during the early 1960s began the process of tackling racism with laws. Prime Minister James Callaghan said, “cannot change people’s attitudes but we can penalise them for acting on them…”.

And so in recent weeks it became obvious that the ‘relentless tide’ of immigration cannot be stopped even by Brexiteers – an effort so zealous it is injuring a fragile British economy.

And we saw the human side of this immigration. Most of Grenfell Tower, that monument to inequality, totem of displacement from Asia, Africa, the Middle East or some other forgotten colony of the Empire, speaking a patois that is the effective modern syntax of Britain, a linguistic amalgam whose roots are in British, French, Spanish, Dutch and German conquests of native peoples. I’m told unemployment for 16-24 year olds in Britain is 25% for blacks and 28% for Bangladeshi and Pakistanis, more than twice the rate for whites (12%). It strikes me now how much worse is their predicament than that of the Irish now in Britain. Current migrants are better educated and the ‘security heat’ has been transferred to those of Muslim faith, courtesy of Isis, Jihadists and the Western coalition which invaded Iraq. As that stark shell of an inferno tower emblazons another era of civic failure into tiring hearts new homeless victims have holes in their souls and gaps in their families, in an England that has failed them, just as their forerunners were failed during the Notting Hill riots more than half a century ago.

Kevin O’Connor lived in Ladbroke Terrace when on the buses. He worked on the books pages of the Guardian and for the Irish Post from the late 1960s and returned to work for RTÉ in Ireland from 1974 where he was Mid-Western Correspondent 1979-80.