Back in the 1970s, there was striking advertising poster in Kilkenny Mart featuring a powerfully built bull with a ring through its nose. The unsubtle slogan: ‘No bull in the Irish Farmers Journal’. The old Kilkenny Mart building is long gone, but the Farmers Journal rumbles on.

The Farmers Journal, however, rumbles on. Founded in 1948, it is approaching its seventieth birthday and, in an age of plummeting newspaper sales, continues to have a robust weekly circulation of nearly 70,000.

And while never at the journalistic bleeding edge, the Journal has enjoyed grudging respect, both for its commercial savvy and for wielding significant political clout in the agribusiness sector. In recent months, however, the proverbial bull has not only returned to the Journal, it has run amok.

You cannot understand the Journal without reference to Matt Dempsey, who edited it for 25 years until 2013. Today, he is chairman of the Agricultural Trust, the body that controls the Journal, and retains a weekly column, so while 39-year old Justin McCarthy (with no journalistic experience beyond the Journal) is editor, there is little doubt as to who is the power behind the throne. 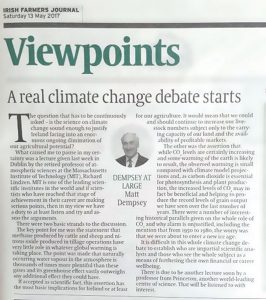 Dempsey is also a former president of the Royal Dublin Society (RDS) and it appears to be here that he had a meeting of minds with retired UCD meteorologist, Ray Bates, in their shared interest in shielding Irish agriculture from the need to cut emissions to tackle climate change. In July 2016, Dempsey’s RDS and the Institute of International and European Affairs jointly launched a joint report outlining the “political commitment required to establish Ireland as global leader in climate-smart agriculture”.

The Advisory Committee for this project was drawn from a wide range of interest groups, and included Bates, who by then was making frequent political pronouncements in public on the need for Ireland to not do too much to tackle climate change for fear that it might impair the aggressive expansionary plans of the beef and dairy sectors.

Many eyebrows were raised as to why a former Met Eireann scientist appeared far more interested in the wellbeing of Irish agriculture rather than in articulating the mainstream scientific community’s alarm at the dangerous trajectory of climate change and the existential risks it poses for life on Earth.

Then, on May 5 last, the pieces of the puzzle began to fall into place. That evening, a shadowy new group styling itself the Irish Climate Science Forum (ICSF) had its inaugural meeting in a hotel in south Dublin. Their invited guest speaker was the noted US climate denier, Richard Lindzen. As a statement of intent, their choice of a hard-line contrarian could hardly have been clearer.

This reporter attempted to attend as a member of the press, but was rebuffed by the organisers, who explained it was a “strictly private event” and among the undesirables to be refused access were “politicians, media and NGOs”.

The ICSF describes itself as “a voluntary group of Irish scientists, engineers and other professionals, currently in a formative stage”. It plans to carry out what it says is “neutral, independent analysis of the latest climate research with the purpose of better informing climate and energy policies in Ireland”. The 50 or so invited guests, including several current and former Met Éireann staff, were almost exclusively hand-picked on the basis of their relationship with Ray Bates.

The real purpose of Lindzen’s talk appears to have been to provide ammunition for the opening salvo in a new war on climate science, with Matt Dempsey and the Journal willing accomplices in the endeavour. Dempsey duly wrote up an entirely uncritical account of Lindzen’s junk science and ran it in his column. His understudy Justin McCarthy rushed in the editorial column to support and endorse the long-discredited denier talking-points that Dempsey had rehashed from the ICSF talk.

Dempsey shipped a fair amount of flak for his troubles, including a very uncomfortable interview with RTÉ’s Philip Boucher Hayes, who wondered why Dempsey would rush to print statements when he appeared to have no idea whether they were true or false. NUI Maynooth climatologist, Professor John Sweeney, also trashed Lindzen’s presentation as “balderdash”.

Rather than backing down, the Journal instead doubled down, first offering Bates a page to support Dempsey (Sweeney was also given the right of reply, but his solitary piece amid a blizzard of contrarian coverage, has been the sum of the Journal’s openness to the views of 97% of practising climatologists).

The Journal then went gangbusters, and ran a news item from the ICSF’s second meeting, this time quoting guest speaker William Happer, long-retired professor, Trump supporter and noted (and, frankly, somewhat unhinged) climate denier. The Journal comically headlined the piece: ‘Earth is in the midst of a CO2 famine – Princeton professor’, and reported Happer’s long-debunked spiel as though it was something other than crude propaganda.

The Journal’s entirely new-found interest in the science of climate change did not end there. In the same edition, it carried a spread over two pages from a father-and-son duo called Michael and Ronan Connolly, self-styled “independent scientists and environmentalists”. In case you’ve never heard of them, that’s because nobody else has either. They are involved with Bates in the ICSF and run an odd little website called ‘Global Warming Solved’. They also labour under the curious impression that they have out-thought the entire global scientific community.

Here’s an example from their FAQ section: “There have been many peer reviewed studies which have claimed that man-made global warming is both real and dangerous. Our findings show that both claims are wrong”. Simple as that. And what about CO2?: “the models were wrong. CO2 doesn’t cause global warming.” Were the Connollys, self-described polymaths, actually able to prove either of these claims, they would by now be Ireland’s newest Nobel laureates.

The Connollys generously describe the entire international scientific community (NASA, NOAA, the UK Royal Society, the IPCC and hundreds more international scientific bodies and institutions) as more likely misguided than corrupt: “We are optimistic that when our new findings are considered by the scientific community, most open-minded scientists will agree with us that man-made global warming theory was flawed”. Indeed.

Before commissioning the Connollys to carry out a take-down on an actual climatologist, the internationally respected Professor John Sweeney, Journal editor Justin McCathy could have spent 10 minutes acquainting himself with the Walter Mitty credentials of his authors. But then again whatever the Journal is engaged in here, it is assuredly not journalism.

Four pages on in the same issue, under the heading ‘Agriculture the climate change scapegoat’ a tillage farmer is given space to air his flat rejection of climate science. “The fact that the Earth’s temperature is rising for the past 150 years is irrelevant”, Gerald Potterton explains. As if that wasn’t convincing enough, yet another full-page article in the same issue screamed: ‘Climate proposals to cost Ireland €1bn’.

The one dissenting voice in this contrarian chorus is dairy farmer and former IFA environment chair, Harold Kingston. While like many in the IFA, he enjoys baiting ‘greens’, he is assuredly no fool; he is probably the best informed contributor on climate issues in the entire organisation. Kingston ventured that he was “very disappointed with Matt Dempsey’s article and the editorial comment about Richard Lindzen’s recent speech in Dublin…Lindzen’s science has been questioned and proved wrong”. “To have it put out in the context of Irish agricultural emissions as an area worth exploring does no favours to Irish agriculture”.

You might by now be admiring the bravery of the Journal in printing such a seditious view of the nonsense being peddled by its eminence grise; however, Kingston’s well argued article never made it into the print edition and is instead buried behind an online paywall.

The trust any publication enjoys is hard earned and easily lost. The Irish Farmers Journal is now engaged in a reckless gamble with a reputation built up over seven decades. It is choosing to present and promote blatant propaganda and fake news, rather than informing readers of the real and imminent threats climate change poses, both to farming and to their personal safety. The truth, in time, will out.

John Gibbons is an environmental writer and commentator and tweets @think_or_swim