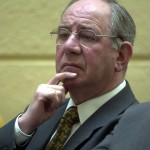 I’ve known Ben Briscoe (77), former dynastic Fianna Fáil TD and Lord Mayor of Dublin, for over twenty years. He has remained a keen observer of politics since he retired as a Fianna Fáil deputy in 2002. I visited him recently in his home in Celbridge to interview him.
He is a courteous host. As he escorts me into the house, Ben tells me that he is the owner of five Rhodesian Ridgebacks,  large African dogs used to hunt lions. He says their fearsome reputation is undeserved, but asks me not to look them straight in the eye initially, just to be on the safe side. As the dogs circle and sniff me, I’m looking rigidly into the distance. All is well in the end and one of the females sits on the couch opposite for the entire interview.
Briscoe doesn’t think much of journalists. He makes an exception for Sam Smyth, but can’t abide Joe Jackson. “If I saw him on the street I’d be tempted to kick him in the bollocks”. He claims that Jackson deliberately misrepresented his views on gay people in a Hot Press article when Briscoe was Lord Mayor. His views on journalism were also coloured by an encounter with a prominent journalist in the 1960s. He claims this now-deceased Irish Times journalist, who got money from Fianna Fáil for ‘consultancy’, once said to him: “I’m an unprincipled bastard and I’ll do anything for money”.
It’s the sort of statement that could have come from the lips of certain Fianna Fáil politicians, which perhaps explains his obvious disenchantment with the party. ‘My disenchantment with Fianna Fail also stems from the fact that a lot of people were also using it as a vehicle to get into politics. It wasn’t because they believed in Fianna Fáil or its traditions. There was no idealism. It was just their way of getting their foot in the door.’
He’s critical too of Mount Street for not discouraging the sort of political nepotism that put a block on new blood coming through. He criticises the practice of ‘paper cumainn’ and claims that the “rot” set into Fianna Fail some time back. He then makes a rather astonishing admission: “I voted Fine Gael” in the last election; and was sorry they didn’t get an overall majority. He did vote too for Fianna Fáil’s Áine Brady for personal reasons.
He likes Enda Kenny. “I’m very impressed with the way Kenny is coming across, because he’s coming across with strength. I like the way he looks Adams straight in the eye”.
He thinks it is now time to end Civil War politics definitively by having a merger of Fianna Fail and Fine Gael. ‘The people have called it a day on Fianna Fáil. There is nothing now to inspire idealism. My feeling is that if Sinn Féin was to moderate they could overtake Fianna Fail.’
He also believes that if Fine Gael were to get an overall majority – something that he and many of his friends would like to see – that Labour could become the main opposition party. When it comes to the presidential election, he’s supporting Gay Mitchell. “I’m supporting him because I know him to be a man of the people.’
He shared a constituency with Gay Mitchell and they got on well together. ‘I had more respect from Fine Gael and Labour than I had from Fianna Fail”. He claims some in his own party made his religion an issue on the door step. The anti-Semitism sickened Briscoe, a man who is very proud of his Jewish heritage. His father, Robert Briscoe,  a founder member of Fianna Fail was the first Jewish Lord Mayor of Dublin and a very popular figure in the United States.
Briscoe didn’t like the stance of the last government regarding Israel and claims that the current government is “more pro Israel”.
He speaks fondly of his late father. Robert Briscoe reported to Collins in the War of Independence but ended up supporting Dev, a man that Briscoe always liked. The principles and values that informed the new Fianna Fáil party are the same ones that shape Briscoe’s view of politics.
“My motivation for this come from what’s best for the country. My father was one of the first forty members. He used to pay the rent for the party when they were in O’Connell street. It was ten shillings a week. The party is not the party that my father founded. The country comes first, then the party”.
If a man like Ben Briscoe is saying these things ….then maybe Fianna Fáil does have a problem.