Each revolution, including Euromaidan against President Yanukovych, has brought disappointment. The oligarchs remain dominant, led by President Poroshenko, the richest man in the country’ Stalin’s policy of de-Kulakisation killed between two and seven million Ukrainians and annihilated the fabric of village life 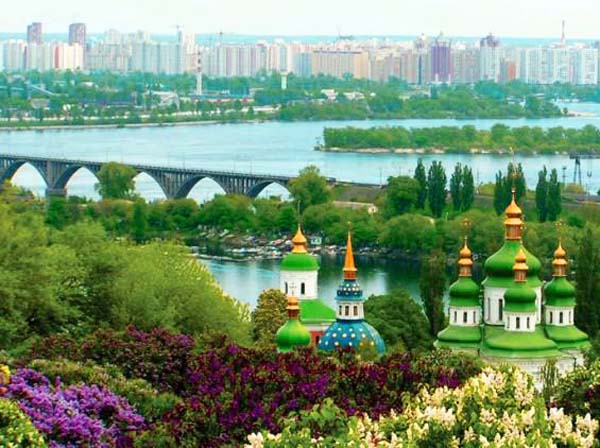 Ukrainians like to say theirs is the largest fully European country. That scale is enhanced by a transport infrastructure relying on unwieldy, Soviet-era rail and roads that are mostly potholed outside of a few stretches of motorway, as I discovered to my discomfort on a recent trip into eastern Ukraine. Moreover, with average salaries less than €200 per month travel is a rare luxury for most in this profoundly unequal society. In a country of great diversity and relative youth, national identity is fragile.

The depredations of the Soviet era when Ukraine was theoretically an autonomous republic but really an integral part of a vast imperium are apparent in the unforgiving architecture of its cities. In the outskirts of Kiev, as elsewhere, tower blocks loom at heights unknown in Western Europe, and inside the capital concrete monoliths sully the splendour of a pre-Revolutionary heritage that includes the UNESCO medieval site of Santa Sophia Cathedral.

The deadening weight of the communist aesthetic recalls the advice of Marxist theorist George Lukács: “What is crucial is that reality as it seems to be should be thought of as something man cannot change and its unchangeability should have the force of a moral imperative”.

In the long shadow of imposing structures and heroic monuments people would accept the inevitability of the triumph of Communism. Alas, since independence in 1991 the trend has been to replace this with the brash sheen of American capitalism, an implicit genuflection to the Cold War victor and its consumerism.

Obviously architecture was the least of the excesses of Communism in Ukraine. That mantle is reserved for their great famine known as Holodomor when Stalin’s policy of de-Kulakization (1929-1932) killed something between two and seven million Ukrainians and annihilated the social fabric of village life: either you took a job in a collective or went to a city elsewhere in the Soviet Union.

Simultaneously, entire nations, including the Tartars who once occupied Crimea, were forcibly relocated to different parts of the empire. This destruction was compounded by the German invasion in World War II, although Ukrainians had an ambivalent, and in some cases collaborative, relationship with the Nazis during over two years of occupation.

Today in Ukraine most cities in the south and east are Russian-speaking. Parentage is often, unsurprisingly, mixed: a group of young professionals I met in the city of Dniperpetrovsk revealed ancestry Ukrainian, Russian and even Tartar. All spoke Russian as their first language but considered themselves Ukrainian. Even religion, historically, did not separate Ukrainians from Russians as both followed the Greek Orthodox rite. It evoked the question: what does it mean to be Ukrainian beyond living within the borders of that state?

A civic nationalism divorced from the kind of destructive ethnic identification that bedevilled the break-up of Yugoslavia would minimise lethal divides. But the current taste for symbols of Ukrainian identity, such as the surge in popularity for traditional dress, suggests this is not on the agenda. Pride in cultural inheritance can easily be skewed towards atavistic violence.

I discovered an increasing despondency among my new-found friends at the capacity of Ukraine’s politicians to bring meaningful improvement to the country. Each revolution, including the latest Euromaidan against the staggering corruption of former President Victor Yanukovych has brought disappointment. The oligarchs remain dominant, led from the front by billionaire President Petro Poroshenko, the richest man in the country.

According to a recent report from the Kharkiv Human Rights Protection Group a desultory one in five cases against high-ranking officials ends with conviction and imprisonment.

The aspirations of the young and dynamic quivering at the possibility of joining the European mainstream remain frustrated. Inevitably in some quarters there is nostalgia for a more authoritarian era proximately manifest today by Vladimir Putin’s Russia. According to my friends in Dniperpetrovsk the divisions in Ukraine are often generational.

Nearby Donetsk is still controlled by Russian-led insurgents. An unsteady ceasefire has held there since September. There have even been attempts, as in Russia, to rehabilitate Stalin. The city was previously called Stalino. Nostalgia for the Soviet Empire is being incubated.

Russian aggression feeds extreme Ukrainian nationalism. Military build-ups have pernicious effects wherever they are found. In Kiev an array of tanks is parked outside the foreign ministry and the distinctive grey camouflage of the Ukrainian army now seems a fashion accessory, most of all for supporters of the far-right Svoboda (Truth) party.

An encounter I had with a Svoboda character in a Kiev hostel was revealing. When I said I was Irish he exclaimed his admiration for the IRA, and was a little put out to hear that I was no supporter of what he perceived to be another underdog fighting an imperial foe. The fighters against the Russian-led rebels in Donetsk were his heroes.

Ukraine offers huge rewards for Russia. It is an agricultural power house, once the bread basket of the Soviet Union, and today is the world’s fifth largest corn producer and the largest producer of sunflower oil. Further, although corruption even extends to the awarding of degrees, its educated population especially in technical disciplines are an important asset.

All nations have their myths that bind disparate groups together inside one state. The complication for Ukraine is that its history is deeply entwined with that of Russia’s. Even the name ‘Rus’ originates in the medieval kingdom with its capital Kiev established by Viking colonists before it was gradually Slavicised. Ukrainian identity was forged through contact with neighbouring empires: first the Polish-Lithuanian Commonwealth that once stretched from the Baltic to the Black Sea, and afterwards the partitions of Poland beginning in the eighteenth century, under the Austro-Hungarian Hapsburg Empire which served as a hothouse for numerous nationalist identities, including Zionism and Nazism.

As their language crystallised in a form and with a script different to that of Russian, and poets especially Taras Shevchenko illuminated a national character, nineteenth century nationalists turned to the Cossacks as a distinguishing source of identity. Translated as ‘free man’, Cossacks were bands of escaped serfs that resisted the Catholicism of their Polish landlords and established military settlements along the Dniper and elsewhere, in the late middle ages. Their indomitable spirit strikes a chord with modern Ukrainians and is resurrected in re-creating of their settlements in Dniperpetrovsk’s impressive historical museum. The tragedy for the Cossacks was that after throwing off the shackles of the Polish nobility they succumbed to the Russian Empire. This has an obvious contemporary resonance.

Passing through the vast interior, as giant corn fields stretch beyond the horizon, one sees the great possibilities for this country. Encountering the wide-eyed interest of people in world affairs, their knowledge generally beyond that of their Western European counterparts, fosters a visitor’s optimism; witnessing small kindnesses from those with few possessions is touching. But the current system is failing people and the longer that endures the further the already pronounced wealth inequalities will grow, and with that the entrenchment of petty tyrannies.

Membership of the European Union is not a panacea for Ukraine. Ensuing emigration could lead to a crippling brain drain, and a free market could be problematic in some sectors. But equally Europe cannot allow a new Iron Curtain to develop. In the end Ukraine needs to develop an accommodation with its Russian neighbour to whose fate it is bound.

Young Ukrainians need reassurance that their country can be reformed. Countering Lukács: reality as it seems to be should be thought of as something man can change.