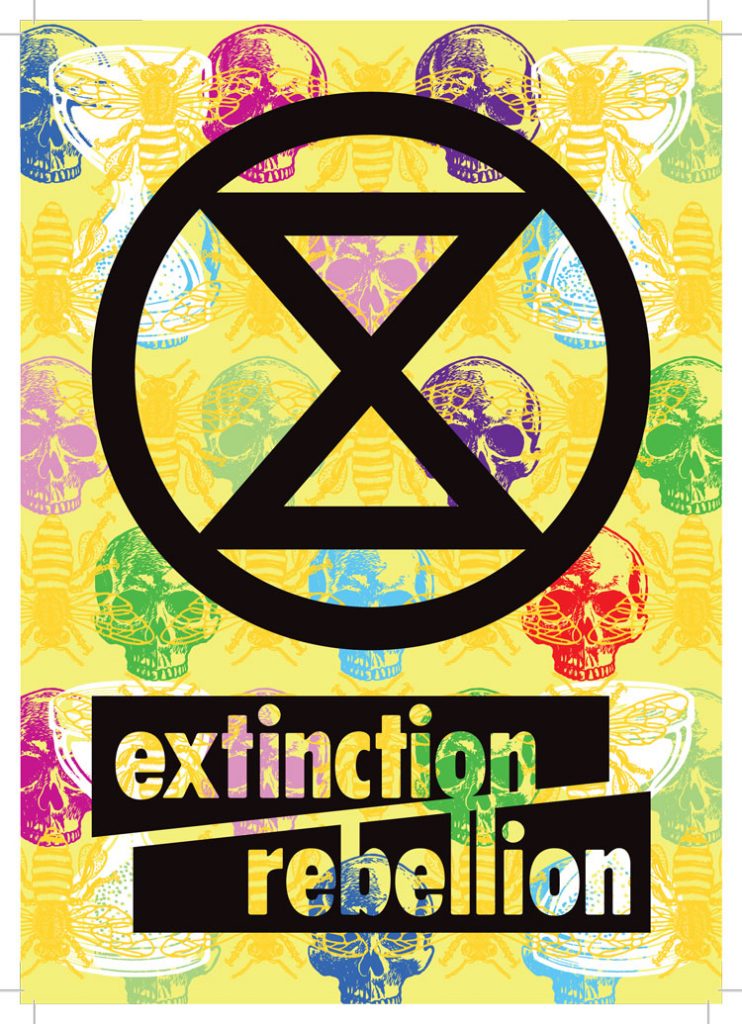 In 2007, in the run up to a crucial general election, I was involved in setting up a campaigning group of environmental activists which we called HEAT to campaign on climate change. We believed that a reduction in carbon emissions of 90% by 2030 was necessary to avoid the tipping point for global warming catastrophe of a rise of more than 2 degrees Centigrade above pre-industrial levels. We wanted Legislation – a law! – providing for 3% annual reductions in our greenhouse gas emissions. We arranged for a cockroach to follow then Minister for the Environment Dick Roche to highlight his civilisation-threatening carbon-profligate policies, we elevated raised helium balloons over Leinster House saying the likely new government should prioritise climate, we produced research, we beamed images on to the Department’s offices in the Custom House. We helped with a televised invasion of the Ryanair AGM and a spoof contribution to a Bord Pleanála hearing on Dublin airport expansion. Our primary stunt was baking effigies of our leading politicians in a sauna. RTE sent cameras but it got bumped off the TV news by some more pressing matter.

In short I have a firm gauge on how difficult it was to engage citizens, media and politicians on climate, in 2007. HEAT became moribund without making much of an impact and various other groups including Stop Climate Change, Friends of the Earth and An Taisce have made the running without really capturing imaginations. The fault has not been theirs but that of a public that lacks the capacity to address existential threats. Twelve years later, perhaps too late, a movement is sweeping all before it.
Extinction Rebellion (XR) styles itself a socio-political movement and it applies the lessons of psychology and sociology to work out what protests have worked. The idea is to use nonviolent resistance to protest against climate breakdown, biodiversity loss, and the risk of social and ecological collapse.
Extinction Rebellion was established in England as recently as May 2018 with about 100 academics signing a call to action in support in October 2018 and launched at the end of October by activists from the campaign group Rising Up! including  Roger Hallam, 52, famous for daubing a wall of King’s College London with the words ‘divest from oil and gas’ in 2017 as a protest against the institution’s fossil fuel investments – and avoiding a court conviction. When university security guards intervened, the veteran protester handed them home-grown salad including red mustard leaves, rocket, and rainbow chard as a gift.
In November 2018, five bridges across the Thames River in London were blockaded. In April demonstrators brought parts of central London to a standstill, causing roadblocks on Waterloo Bridge, Oxford Circus and Marble Arch, while others glued themselves to trains and buildings. More than 1,000 people were arrested.In May, the Metropolitan Police said they would push for all the 1,151 people arrested – which included Olympic gold medal-winning canoeist Etienne Stott – to face charges.
So far 232 files of evidence have been passed to the Crown Prosecution Service, with 180 people charged, one cautioned for outraging public decency and 32 released with no further action.

Citing inspiration from grassroots movements such as Occupy, Gandhi’s Satyagraha, the suffragettes,  Martin Luther King and others in the civil rights movement, Extinction Rebellion has attracted activists who have pledged to be arrested, and even to go to prison, following the mass arrest tactics of Bertrand Russell’s anti-war Committee of 100 in 1961. Activists also look to the Marriage equality, Repeal, UK Momentum and Bernie Sanders campaigns. Sanders, for example, had a strategy of immediately involving volunteers to recruit more volunteers.
The movement is participatory, decentralised, and inclusive. It uses a circled hourglass, known as the Extinction Symbol, signifying that time is rapidly running out for many species. In Ireland there are small local affinity groups in Dublin, Cork, Clare, Galway, Kildare, Limerick, Derry, Leitrim, Wexford, Dingle, West Cork and Northern Ireland, and there is a steering committee, elected at a national meeting in November, to help coordinate actions, trainings and talks. The group’s demands include: Tell The Truth; Act Like It’s An Emergency; Ensure A Just Transition. It is nothing if it is not radical. Some of its principles include:

WE HAVE A SHARED VISION OF CHANGE Creating a world that is fit for generations to come.
WE SET OUR MISSION ON WHAT IS NECESSARY Mobilising 3.5% of the population to achieve system change – using ideas such as “Momentum-driven organising” to achieve this.
WE NEED A REGENERATIVE CULTURE Creating a culture which is healthy, resilient and adaptable.
WE OPENLY CHALLENGE OURSELVES AND THIS TOXIC SYSTEM Leaving our comfort zones to take action for change.
WE VALUE REFLECTING AND LEARNING Following a cycle of action, reflection, learning, and planning for more action. Learning from other movements and contexts as well as our own experiences.
WE WELCOME EVERYONE AND EVERY PART OF EVERYONE Working actively to create safer and more accessible spaces.
WE ACTIVELY MITIGATE FOR POWER Breaking down hierarchies of power for more equitable participation.
WE AVOID BLAMING AND SHAMING We live in a toxic system, but no one individual is to blame
WE ARE A NON-VIOLENT NETWORK Using non-violent strategy and tactics as the most effective way to bring about change.
WE ARE BASED ON AUTONOMY AND DECENTRALISATION We collectively create the structures we need to challenge power. Anyone who follows these core principles and values can take action in the name of RisingUp!

In Ireland XR has pulled a number of stunts, mostly led by a small number of key activists: In May they dressed as Adam and Eve and met a receptive President at the Bloom festival. In June activists dressed in white overalls holding red flowers representing “innocent children” while others dressed like grubby politicians in cheap suits who poured blood – actually a red, sugary syrup – over them. Then more members in green overalls, to symbolise the “greenwashing” of the climate and biodiversity crisis, arrived to clean up the mess. In July, Minister for Climate Action Richard Bruton was constantly interrupted by protestors as he attempted to address a conference on forestry as a solution to Ireland’s climate emergency at the National Botanic Gardens in Dublin. Protestors repeatedly highlighted reliance on non-native sitka spruce species to lower carbon emissions. A number of XR activists glued themselves to the Department of Climate Action building in Dublin to protest against the blocking of a People Before Profit Bill to limit the issuing of new fossil fuel licences. Later in the month XR  staged eight-minute traffic disruptions, called swarming, at Tara Street, along the quays at O’Connell Street, on Parnell Street and at Capel Street Bridge; and a “die-in” in the Natural History Museum.
The group called on the Government to implement the recommendations of the Citizens’ Assembly and introduce congestion charges or a complete ban on traffic in Irish cities. XR also proposed making public transport free for all, extending the smoky fuel ban nationwide and creating better information about the significance of air quality. A week of global climate strikes, whereby adults finally match the efforts of striking schoolchildren, is proposed from 20 September. And another is planned for October when the main aim will be to shut down capital cities – New York, Paris, Madrid, Berlin and many more are confirmed. The theme is “Rebellion OF The Willing” and “Rebels Without Borders” highlighting internationalism and radicalism.
The group regularly carries out positive actions like information session on moving trains, lectures and ‘seed bombing’. The idealism is matched only by the energy.

Extinction Rebellion also had a number of abortive actions due to fear of the consequences of being arrested and convicted and the difficulty of gaining entry to certain events.
It is difficult to fix where power rests in XR Ireland. But that is the point. Much communication takes place on a general ‘Slack’ interactive website which feeds a number of themed ‘threads’. Some activists are more persuasive and more influential than others. Some cells of the organisation are secretive and operate on websites like which leave no trace. Infiltration is a constant danger. At meetings contributions are typically idealistic and positive. The crowd is young with a smattering of old hands, drawn disproportionately from People before Profit and the Trades Unions. It strikes me that the generations that caused climate change are still not engaging at an activist level. Radicalism is assumed and my impression is that the group is typically leftist. Greta Thunberg is an obvious role model. XR Ireland is light on policy, though it is moving to produce something on agriculture. It is possible it will find it difficult to deal with the issue of the extent to which it should confront vested, though vulnerable, interests like farmers. It has struggled to find legal advice on the consequences of arrest for activists from diverse backgrounds. The group somehow also manages to be strategic. Political Strategy is one of three anchor Strategy Teams (the other 2 being Movement and Actions). Political Strategy networks with those working on shaping political narratives and campaigns (TDs, other radical movements, think tanks, local XR Groups taking action at a local political level); in order to feed insights into Movement Strategy and Action Strategy.

This is a movement the time for whose ideals and tactics has long since come. It has had little but good publicity so far. It needs to work on policy and to decide the balance it will strike between constructive engagement and confrontation. This issue will not go away though action will always require urgency. To that extent time is both on the side of, and against, Extinction Rebellion.