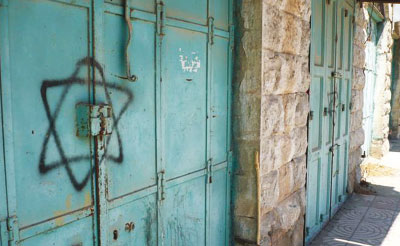 In the Occupied Territories Israel imposes ‘apartheid’ between Arabs and settlers.
Frank Shouldice

Trader Jack stands in the doorway of his souvenir shop in Manger Square in Bethlehem. Fifty yards from the Church of the Nativity it’s a prime location for selling knick-knacks and miniature religious crafts. Jack is not Bethlehem’s most famous son but he’s lived in historic times. A teenager when the Israeli State was created, he grew up watching Palestinians scatter worldwide as refugees, felt his country shrink to 12% of its original size, and now witnesses the bloody tumult of the second intifada pushing what’s left of Gaza and the West Bank over an economic and political precipice.

“We need Israel and Israel needs us”. He wonders aloud: “it’s a two-State system but now they are taking the best land in our territory – do they not have enough?”

A working pensioner in his mid-70s, he finds ordinary life is getting a lot harder. The water supply often cuts off without warning. He can’t take his car outside the Occupied Territories and needs a special permit to travel to Jerusalem, five miles away. All around him are Jewish settlements, the fruits of a key Israeli strategy since 1967. About half a million Israelis now call the Occupied Territories home. Most of them live on land confiscated from Palestinians.

Both the UN Security Council (1979) and the International Court of Justice (2004) declared the settlements illegal. Israel’s Minister for Foreign Affairs, Avigdor Lieberman, does not concur. The Minister lives in Nokdim, a West Bank settlement not far from Jack’s souvenir shop.

In marked contrast to shanty-like Arab hillside dwellings, the hilltop houses are modern and attractive. Settlers get financial incentives from the State to buy them. As if joining up the dots, these hilltops are connected by a highway system that is off-limits to Palestinians. The effect is to create a hermetically-sealed Statelet which, in turn, paralyses movement for non-Israelis.

Gilo is a typical model, built on a hilltop heavily fortified by the Israel Defensive Forces (IDF). “They build them up there so they can dominate us”, shrugs a Palestinian mother. “Many settlements – Ariel, for example – let sewage run down the hill and destroy farmland belonging to Palestinians. That’s what they think of us”.

Palestinian commerce has virtually collapsed. Tourists have been scared away. While Jack stands outside his empty shop, groups of unemployed young men sit around the vacant square, passing time. Waiters in an adjoining café idle in the doorway, fanning the breeze with unperused menus. Tonight, the 72-room Bethlehem Star Hotel is home to four guests.

For Zoughbi Zoughbi, founder of the Wi’am Palestinian Conflict Resolution Centre, these are troubling times. A campaigner committed to non-violence, he believes the settlement programme is the greatest single obstacle to peace.

But directly in front of his office looms another hurdle: the security wall. Also built on land appropriated from Palestinians, it stands eight metres high and runs for over 500 miles through the West Bank, protecting Jewish settlements, separating communities and in places ensuring cash crops like olives rot on the ground while the farmers who own the lands go bankrupt.

“It is an apartheid wall”, says Zoughbi, glancing at the concrete horizon that greets him each morning. “It’s about annexation. It is used to confiscate more land and the best places for aquifers. It is also used to further divide and isolate Palestinian areas from each other”.

Comparisons with the Berlin Wall are all too obvious but it is ironic that Israel should imitate so enthusiastically a policy dreamt up by a former German régime. The rationale is to reduce attacks by Palestinian militants; however another logic suggests that creating so much bitterness will provoke a violent backlash to reinforce the mindset that built the wall in the first place.

In the name of national security, each consciously bewildering maze outside the Occupied Territories tapers into a crossing point. Arab residents, including women and children, clutch possessions through the babble of disorderly queues, routinely herded through a permit control-system, while armed guards bark orders from behind mirrored sunglasses. The scene conjures its own echoes of a Jewish past.

“It is not easy”, concedes Boughbi, soft-selling a gospel of non-violence to growing legions of disenchanted Palestinians. “I am one of those who would like to deprive the Israelis of an enemy. Through its daily provocations Israel tries to push us to use greater violence, precisely because the Israeli government is well-equipped to deal with violence. It seems that [the] Israeli Government is threatened more by thoughts of peace and non-violence than by war”.

And then there is Hebron.

Nowhere else in the West Bank have Jewish settlers been placed among the Arab community. With a total population of about 160,000, Hebron is one of the West Bank’s primary cities. A busy marketplace fills the newer parts but what makes Hebron unique is the Old City, languishing in desolation.

In a policy of aggressive displacement, over 200 Palestinian shops and houses have been shut down by military order, over a hundred more evacuated after its main drag Al-Shuhada was declared “a settler-only street”.

The settler controversy here traces back to a 1929 pogrom when 67 Jews were murdered and Hebron’s minority Jewish community was driven out. The city passed through British, Egyptian and Jordanian hands until Israel assumed full control at the end of the Six Day War in 1967. Afterwards, former Israeli Prime Minister David Ben-Gurion told a BBC interviewer that “in the cause of peace Israel should take nothing in the conquered territories with the exception of Hebron – which is more Jewish even than Jerusalem”.

Hebron’s religious significance relates to the Cave of Machpelah, burial site for Abraham, patriarch of Jews, Christian and Muslims. The Ibrahimi Mosque beside it now serves as the disputed focus for rival traditions.

Jewish settlers ignored a prohibition on civilian settlements and set up the Kiryat Arba camp on the outskirts. In 1979, a small number of hardline settlers ventured closer to town to gain a foothold in former Jewish neighbourhoods of the Old City. The Israeli Government supported the move by sending in the army to protect them.

Hebron’s subsequent history is a grim catalogue. Among literally hundreds of incidents, six Jews were murdered on their way home from a religious service in May 1980; in February 1994, Dr Baruch Goldstein from Kiryat Arba ran amok at Ibrahimi Mosque, killing 29 Muslims at prayer.

Israel’s response to an increasingly intractable problem was not to remove the settlers but to split Hebron in two. H1, with a population of some 130,000, is exclusively Arabic and is run by the Palestinian Authority while the smaller Israeli-run H2 – taking in the Old City – holds 30,000 Palestinians. Over 3,000 IDF troops are deployed in H2 to protect some 600-800 fully-armed Jewish settlers.

The Arab population here is dwindling. Walking along abandoned Al-Shuhada is like trawling through a ghost town. The bus station is now a military compound. A once-thriving vegetable market is silent. IDF checkpoints filter every entrance, manned by young soldiers, bored but jittery, suspecting that the next Arab passer-by might be a suicide bomber.

The Star of David is sprayed on various shutters of empty shops and houses. It’s a jarring sight but, in a hideous reversal of how this symbol was used in Nazi Germany, these stars signify Arab properties earmarked for takeover by Jewish settlers. Such an echo of former times is as strange and unsettling as twisted graffiti demanding “Arabs to the Gas Chambers!”

A handful of Arab families remaining by Al-Shuhada live behind protective grilles. A wire cage installed around the local school catches missiles, stones, excrement and rubbish thrown by adult Jewish settlers or, increasingly, by their children. Foreign monitors and journalists are routinely attacked. IDF soldiers will usually stand back and let it happen and, emboldened, the settlers do as they please knowing that the law, as it exists in Hebron, is behind them. An internal IDF investigation in 2003 concluded that settler attacks could only enjoy such impunity “if carried out under the protection of the Israeli regime”. “The State of Israel looks very bad with regard to the rule of law in Hebron”, it said.

It is only against such a poisonously repressive backdrop that militant Islamist resistance could blossom. Predictably enough, Hebron has since become a stronghold for Hamas. Violence here is certainly not one-way traffic – Hamas murdered four settlers nearby the day before scheduled talks in Washington began – but groups like B’tselem and Human Rights Watch have documented a succession of indiscriminate attacks by IDF personnel on Palestinian civilians.

One exception to this see-no-evil approach is Shovrim Shtika (Breaking the Silence), a group of ex-IDF soldiers who conscientiously object to what they witnessed – or carried out – during army service. “Israelis have no idea what is happening in the Occupied Territories”, maintains Mikhael Manekin, discharged in 2002. “We cannot change things until we acknowledge our culpability”.

Back in Bethlehem, Jack has no ready answer for what will happen in Hebron or what the Washington talks may bring. Instead, he wants to talk about Bansky.

Britain’s guerrilla artist crossed into Palestine armed with a paintbrush. Using the wall as his canvas, he painted three wise men approaching Bethlehem only to be stopped in their tracks by the security wall. Jack loved the mural and set off for his workshop in Manger Square to craft a miniature wooden replica.

In Jack’s ornamental version an observation tower stands in place of the Northern Star. Over the wall Jesus is newborn in Bethlehem. “The three wise men are like us Palestinians”, smiles Jack. “They can’t get from Jerusalem to Bethlehem”, he continues playfully. “But Banksy gave me this idea…”.

To my surprise, he slides back a tiny doorway concealed in the security wall. “When they have the permit the wise men can enter. Same as us”.

He holds the ornament to eye level and we peer at each other through the open door. We laugh for a moment. Then he sighs heavily and slides the door shut.