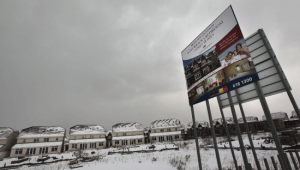 Recently several auctions around the country have been forestalled by hostility from  locals.  For example the auction of a farm in County Meath failed in the teeth of local opposition.  The auction, instituted by a bank in payment of arrears, was abandoned with only a single euro bid.  At first glance, it looked like a welcome rebirth of the kind of popular indignation that fuelled the Land League struggles of the 19th Century.  But a closer examination draws this parallel into question.  The land was not farmed by the owner though he did live nearby.  He was landlord to another person who rented the farm.  Far from being an indigent farmer in trouble, the owner was a property developer who had pledged the land as collateral for his bank loans.  In the Land War, neighbours defended families who inhabited the land but did not possess it.  In Meath the neighbours defended a man who possessed the land but did not inhabit it.  This confusion about the true character of mere possession is endemic in modern Ireland.  In Marie Jones’ Stones in his Pockets two Irish movie extras make great comic work of trying to follow an assistant director’s instruction to look “dispossessed” in the presence, on horseback, of the daughter of  the Manor.  What, they wonder, does dispossessed exactly look like. We, in turn, should wonder whether the opposite of dispossession should look like more than mere possession.

The possession of land and territory is very much at the centre of a burning public debate.  Both hill farmers and hill walkers each feel potentially dispossessed by the other.  Mention the public acquisition of land before rezoning and you would have a ragged mob of farmers and developers quickly assembling outside the Dail.  Yet  in the absence of such public provision of land and housing, many were unable to afford a house and many others find themselves in negative equity and unable to service exorbitant mortgages.  The extension of the road system even in the face of recession displaces many but enriches others as tribunal testimony shows.  In many rural areas of Ireland it is safer now to be a card-carrying communist than a card-carrying member of An Taisce such is the opposition to the limitation of property rights in the name of landscape and heritage.  In Mayo one local commentator raised the spectre of the Land War, intimating that An Taisce adopted its policy of opposing one-off rural houses in order to keep the countryside safe for gentlemanly pursuits like stag and fox hunting.

While the vision of An Taisce in mounted pursuit of the stag is a bizarre delusion, the historical fact of Irish dispossession at the hands of  a British colonial elite is real enough.  This history is of course well known and need not be rehearsed here.  Nevertheless, it is worth remarking on how late this fundamentally feudal land-holding system persisted.  Not only the landlord class was pre-modern but their antagonists on the land were also made up of an essentially feudal peasantry.  The economic and social dynamics of Ireland in the nineteenth century were written in the conflict between these two classes over the ownership, occupation and exploitation of land.

It cannot be truly said that the Irish were dispossessed during the famine years for they did not in fact possess the land.  Rather the poorer classes, the landless labourers, cottiers, and small farmers were prevented from continuing to inhabit the land.  They were more than dispossessed.  They were banished either to the other side of the grave or the other side of the water.  For their part landlords adopted a new policy of pursuing rent through the consolidation of farms of optimal size and efficiency.  The old townland villages were broken up and larger farms occupied by individual families were created.  Only then did this newly prosperous group of farmers set about possessing Ireland.

And they succeeded.  The Land War, recalled in distorted fashion by the Meath events, resulted in a succession of Land Acts which ended the feudal land-holding system and deliberately substituted a system of peasant proprietorship.  In order to make proprietorship a reality it was not only the landlords who had to be left behind.  It was also necessary to leave behind Michael Davitt’s more inclusive and egalitarian vision of land nationalisation.  Unfortunately, Davitt’s inadequately-landed constituency now lay in famine graves or dwelt far from the land in New York, Boston or Liverpool.  Similarly James Connolly’s natural socialist constituency also lived abroad as Irish workers swelled the industrial armies of other countries.  Ireland was to be possessed by a portion of the Irish nation but sadly only after the nation as a whole ceased to inhabit it.

Through a long struggle the Irish have succeeded in possessing Ireland but have failed to inhabit it.  The commentator Fintan O’Toole has observed the Irish tendency to treat the land as if we were only passing through, anxious to make a few quid while the going is good, before moving on.  Seemingly someone else’s posterity will have to clean up the mess.  The post-colonial legacy within Irish society is complex and contested.  Many are understandably impatient with what is even now one of the wealthiest nations on the planet comparing itself with the currently wretched of the earth.  Yet the past, perhaps unlike the future, is immutable and inevitably poses problems for the present.  One of these problems is the crucial distinction between inhabiting and possessing the space of Ireland.

It seems that Ireland can claim only what it has succeeded in snatching from the British.  These things include a national identity (even if part of that identity is a fascination with debating it) and a cultural heritage.  But as the controversy over the M3 and the despoliation of the Tara landscape makes clear there is a perilous disconnection between that national identity and cultural heritage and the physical space of Ireland.  The national identity and cultural heritage are quite literally ungrounded.  But this is perhaps not surprising.  The ability to inhabit the country could not be snatched from the British.  The British never succeeded in truly inhabiting Ireland.  What the British were able to do with varying degrees of success was to possess and then exploit Ireland initially for national, but as time went on increasingly for personal gain.  This is what we could take away from the British.  We could then fill their shoes, possessing and exploiting the island, initially for national, but as time has drawn on increasingly for personal gain.

Ireland along with much of the rest of the world has been increasingly “glocalized.”  This evocative neologism stands for the observation that the globalisation of the world economy has not smoothed out the differences between places.  On the contrary, the particularities of place have become more important than ever as each place competes with all the others for footloose capital investment.  The qualities of nations and regions are marketed as competitive advantages to transnational buyers.  Competitiveness becomes the touchstone determining what national or regional characteristics are to be kept and which are to be jettisoned.  Everywhere becomes a locality within a global system or risks withering and death.  Far from questioning this thinking, the current crisis has only led to a doubling down of this neoliberal ideology.

The “glocalization” of Ireland within the emerging global capitalist order was achieved with little debate.  Again this is perhaps not surprising.  A stretch of land, especially an island, which is possessed but not inhabited is easily sold in exchange for compensation, real or imagined.  An inhabited place might not be able to or might not want to resist the surrender of sovereignty that our current form of globalisation demands.  But crucially an inhabited place can negotiate the terms of its incorporation.  A place which is merely possessed can only name its price.  In the face of the EU and the IMF, our political élite seems to have abandoned even this prerogative.

In rural communities and cities there is a tendency to lose public space in favour of private exploitation even at the most intimate of neighbourhood levels.  Just as Irish identity and cultural heritage at the national level is peculiarly spaceless, the lack of local public amenities means that local civil society may be frozen without territorial resources.  What were common amenities were increasingly turned over to private residential and commercial development.  Without space in which to encounter others in regular and occasionally unexpected ways both community and the potential for meaningful democracy is eroded.  The ungroundedness of Irish culture finds expression in the small places as well as large spaces like the Tara landscape.

Local communities like that in Meath can be found to collude in this erosion of public space.  Often local communities expect and demand the mutual defence of each other’s private possession of property.  This defence is frequently extended to the appropriation of common amenities for private gain.  It is left to outsiders and ‘blow-ins’ to defend the public interest.  This is sometimes characterised as a divide between urban and rural outlooks, between aesthetic and pragmatic concerns.  There is no reason, however, to think that the urban Irish cannot appreciate pragmatic concerns or that local people in Ireland have an underdeveloped aesthetic sense.  The difference is instead between those who can claim to possess local territory and those who cannot.  It is pointed out that a place should be of less concern to outsider groups and individuals than to those who were born there.   This should in fact be true but when a place is possessed rather than inhabited normal logic does not hold.  In an uninhabited place, irrespective if where they were born, no one has lived there longer than anyone else.

Perhaps the threat of re-established foreign rule, this time by the EU and the IMF in exchange for the money we are reluctant to tax from our national élites will revive the question of who truly should occupy Ireland today.  The solution to the conundrum of a land possessed but not inhabited is to be found almost literally in a process of exploration. With few exceptions, public space, physical and political, in Ireland is currently uncharted territory. The occupation of this space by a developing Irish civil society will be among other things an act of discovery.  The existence of economic and social crisis makes the creation of meaningful public space all the more urgent.    In an Ireland wholly divided up into private spaces, all encounters can too easily be seen to be the unwelcome result of acts of unavoidable trespass as people fight over who should take the cuts and pay the taxes.  In the face of crisis, real community based in equality, both social and economic, must be the foundation of any solution.  In a time when sadly an increasing number of Irish are resident elsewhere on the globe, it may be paradoxically time for the Irish to fully inhabit Ireland again.