Be careful what you wish for. The voters of Meath East rewarded Direct Democracy Ireland (DDI) candidate, Ben Gilroy, with a surprising 6.5% of the vote pushing Labour into fourth place and upsetting Sinn Féin’s plans for a bigger slice of the cake. But did they know what they were getting when they opted for the former electrical contractor?  Many voters in Italy, particularly those on the Left, are only now discovering that the 5StarMovement (5SM) led by multi-millionaires Beppe Grillo and Gianroberto Casaleggio contains a significant number of fascist sympathisers.

Grillo has called for the elimination of trade unions and has demanded that one solution to the current economic crisis is to lay off tens of thousands of public employees. Casaleggio, a former financial backer of the far-right Northern League, has used his web-marketing skills to attract support from Italian neo-fascist groups such as CasaPound and Forza Nuova.

Back at home, the people around Gilroy and DDI founders, Raymond Whitehead and Clare Leonard, have discovered that their populist views include an empathy with UKIP leader Nick Farage, the anti-abortion Christian Solidarity Movement and the extreme right-wing Freeman movement. Earlier this year, members of the latter group invaded the front of the anti-austerity demonstration organised by the Irish Congress of Trade Unions in Dublin insisting that the organisers turn it into a rally against the proposed property tax. The Freeman of the Land movement has its origins in an obscure conspiracy theory which propounds the nostrum that a birth certificate creates a legal entity which is separate from a person’s body. Thus Gilroy is “Ben of the ancient clan Giolla Rua (Sovereign)” instead of just plain old Ben Gilroy…for constitutional purposes.

There was little mention in his public utterances of his admiration of Farage (who is also president of the far-right Europe of Freedom and Democracy group), or his links to the Quinn family or the Freeman movement

Gilroy was present when a group promoting the Freeman view of the world delayed the eviction of a man from his home near Mountrath, County Laois, in early 2012. According to one witness, Gilroy subjected the deputy sheriff to “a lecture in law which would sound suspect to the ears of any first year law student, let alone a practising lawyer”. Gilroy’s argument appeared to be based on the view that all state law is invalid and so does not deserve respect. 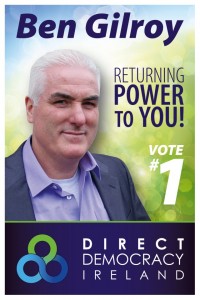 The campaigner has also been prominent in demonstrations in Cavan supporting recalcitrant billionaire businessman Seán Quinn, sharing a platform with the likes of pro-life activist and GAA manager, Mickey Harte.

His well-funded by-election campaign saw hundreds of Gilroy “Returning Power to You” posters around east Meath although there was little mention in his public utterances of his admiration of Farage (who is also president of the far-right Europe of Freedom and Democracy group), or his links to the Quinn family or the Freeman movement. During the 2011 general election Whitehead, a former antiques dealer, and night-club and restaurant- owner took 120 votes in Dublin South for DDI, while the literature of another candidate in the constituency, Jane Murphy of the Christian Solidarity Party, also detailed links to DDI.

The message of DDI is that Irish democracy would be better served with Swiss-type recall referenda which, it argues, would make the political system more accountable. It will be interesting to note what the good folk of Meath East, and other places where DDI hopes to stand, make of this heady mix of constitutional confusion, economic orthodoxy and flirtation with the extreme right in Europe, when they come to marking their ballot papers – after a little more scutiny – next time around.

More generally, while the collapse of the Labour Party vote dominated the media coverage of the Meath East by-election, of potentially greater significance for the future political landscape was the 38.5% of first preferences captured by Fine Gael candidate, Helen McEntee.

While she undoubtedly gained a significant sympathy vote following her late father’s tragic death, the party handlers must be eyeing up the prospects of an overall majority (or proximity such as makes no difference) if that trend were to be replicated nationally.

In the meantime, protests from Labour backbenchers that their ministers must assert themselves more could fall on deaf ears if the larger coalition partner decides to call Gilmore’s bluff and simply ignores calls for a re-negotiation of the Programme for Government.

After all, what are the prospects for Labour if it jumps ship only for the voters to give it a further roasting and the blame for causing an unwanted election?