The Greek debt crisis muddles on through its endless cycles of emergency meetings, and of new programmes replacing old programmes, and of new loans repaying old loans, with no end in sight. After a seismic referendum, Europe’s leadership has been busy working on shoring up the structure of the common-currency block. Designed to prevent future crises similar to those experienced since 2008 across Greece, Cyprus, Ireland, Italy, Portugal, Slovenia and Spain, it is a cure that makes the original disease look benign.
As of May 2015, the European Project has been officially, if quietly, out of sight of the mainstream media and analysts: launched into a new stage of ‘structural reforms’. This time around, the target is the very system of national democracies that formed the cornerstone of the European Union.
To understand this new process, we have to go back to the source of the recent crises: the creation of the common currency. And, to fully map the problem, we have to rely on much more than the internal dynamics of euro area macro-economic divergence since January 1999.
For decades, international economics have postulated a basic monetary policy ‘trilemma’: in a world combining free trade and capital mobility, monetary-policy independence is impossible in the presence of fixed exchange rates. In basic terms, this means that once a country opts to open its borders to capital flows, fixing exchange rates automatically requires surrendering control over interest rates.
The classical trilemma lies at the core of the current euro-area crises. Introduction of the euro has resulted in effective harmonisation of interest rates across the drastically divergent economic systems that comprise the area. These are the so-called euro area ‘core’ and ‘periphery’; or in more simple terms: faster growing economies in the euro area’s less developed member states and slower growing economies in Austria, Belgium, Finland, France, Germany, and the Netherlands. Convergence of policy and rates under the ECB authority also meant convergence of bond yields for Governments and lending rates to enterprises and households, irrespective of the differences in risks and macroeconomic fundamentals between the member states.
What followed was a rapid build up of macroeconomic and financial imbalances between the ‘peripheral’ economies and the euro area’s ‘core’, manifesting itself in sovereign debt and deficit explosion in Greece; asset and property market bubbles in Slovenia, Spain and Ireland; and massive external deficits in Cyprus and Portugal. In Italy’s case, the same imbalances manifested in elevated public deficits 2001-2006 coming on top of high debt levels inherited from the 1990s, and the lack of real reforms made possible by the benign interest rates environment sustained by the ECB.
These effects of the euro integration implied by the classical monetary policy trilemma were both predictable and indeed foretold by a number of economists, in the 1990s. They were dismissed by the European leadership as ‘euro scepticism’ and pushed aside in favour of the politically-motivated closer integration implied by the currency union.
But the basic monetary policy trilemma was just the beginning of the internal contradictions between the euro and the structure of the EU. 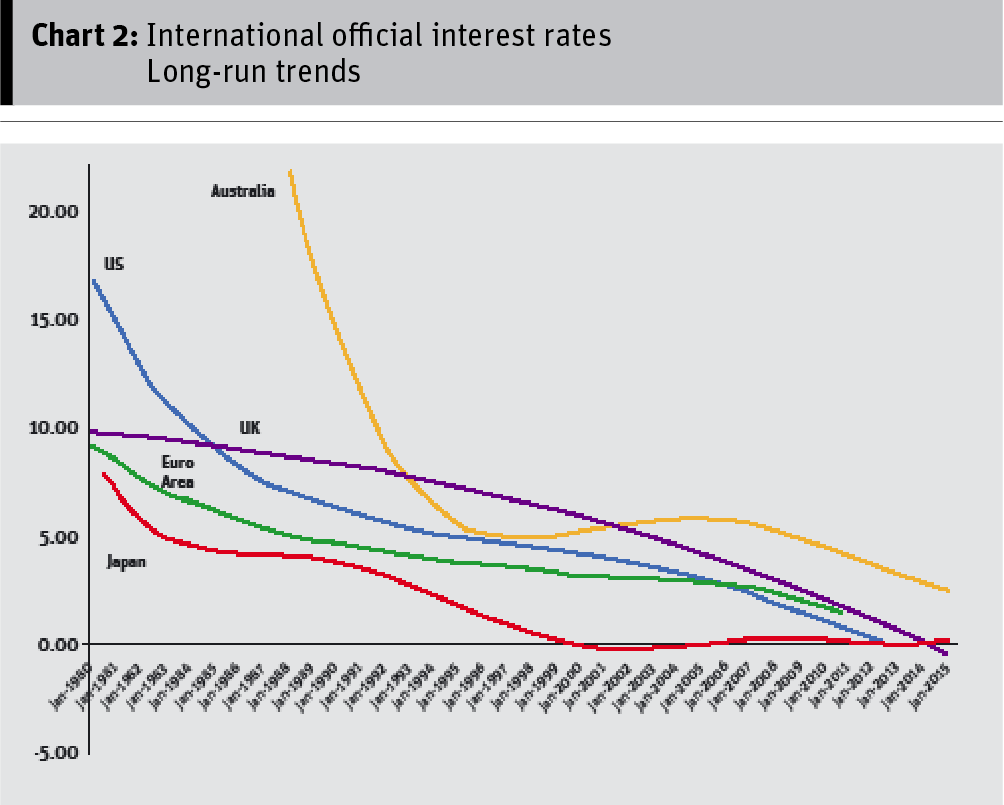 Our experience with the Global Financial Crisis has led to the drastic realisation that the financial system, independent of the real economy, can act as a transmission and amplification mechanism for economic shocks. Hence, in recent years, economists came to recognise that yet another trilemma, usually linked to the existence of weak, underdeveloped banking institutions, was also at play within the euro area. Applied to the euro ‘periphery’ the Financial Stability trilemma simply means that once a country opted to retain free capital mobility and fixed exchange rates, it had to be prepared to accept financial instability.
It was this trilemma that first led to the emergence of the state guarantees of the banks in a number of the euro area economies, and culminated in banks’ bailouts.
Once again, some economists predicted the emergence of this trilemma before the crisis, but they too were ignored by the European integrationists.
Informed by the past failings of the euro architecture, however, we are now facing yet another set of contradictions, still linked to the dysfunctional nature of the currency union we inhabit.
Behold the geo-political trilemma. This stipulates that once capital mobility is allowed, democratic institutions can survive only if the state gives up its monetary and exchange rate authority. As a reminder, the euro area as a whole remains integrated within global capital markets, while it assigns its collective monetary policy independence to the ECB.
Which, of course, means that the democracy thingy is standing in the way.
The reason for this contradiction between democracy and monetary policy is that, over time, maintaining orderly capital flows require investment predictability. This, in turn, means either that interest rates have to be linked to global rates or that the political regime has to ensure low variability in macroeconomic policies.
Post-war Europe, before the onset of the monetary union, relied on a combination of democratic institutions and monetary-policy autonomy to ensure the balance between macroeconomic performance and the will of electorates. Capital mobility was subsidiary to these twin objectives.
Creation of the euro area, however, pushed member states toward balancing capital mobility and democracy, with monetary policy now relegated to a centralised authority. However, this shift represented a major problem, as the ECB found its monetary policy increasingly influenced by global interest rates. Part of the decline in interest rates in the 2000s was based on ECB policies. But part was driven by global capital markets integration.
Before 2008, the system balance was sustained because democratic processes were running in an environment of electorates largely satisfied with superficially high growth rates enjoyed both by capital-recipient countries and capital-source countries. Governments had a strong incentive to maintain their policies of not rocking the boat, avoiding painful reforms. Across the euro area, productivity growth fell; competitiveness declined; misallocations of physical, financial and human capital became the norm; and political elites enjoyed electoral support boosted by the steroid of cheap credit.
This intricate system of patronage, rent-seeking and occasionally outright corruption collapsed like a house of cards the minute capital inflows were disrupted and the financial markets went into a panic mode in 2008.
Political disintegration followed. The response of the European elites was to effectively suspend or curtail democracy in a number of key states at key points of decision-making. Virtually no euro area country that has gone into the external funding arrangements was allowed to independently set its macroeconomic and fiscal policies.
At every point where the legality of some of these policies was contested – by governments, the electorate or the judiciary, the EU juggernaut found the ways and means to impose the resisted ‘reforms’, bypassing normal democratic procedures.
As Village went to print, it seemed Greece might uniquely have bucked the trend.
Elsewhere, the collapse of democratic systems of governance has been accompanied by electoral swings toward radical oppositionalism.
The emergence, in Europe, of three key trilemmas relating to the currency union underpins two key dimensions of the current crises.
The first dimension is the obvious one. The economic crises have been much longer and deeper in the euro area than in any other group of advanced economies, save for Japan. Greece, Cyprus and Ireland are three demonstrative examples here. By the end of 2014, compared to pre-crisis levels, real (inflation-adjusted) individual consumption in these three states was down 22 percentage points in Greece, 19 percent in Cyprus and 16 percent in Ireland when set against the EU28 average. Across the entire euro area original member states (the EA 12 states) the decline was a more modest 2.7 percentage points. All of this is well known.
What is less often debated in Europe today is the fact that since the start of the crisis, the euro area has dramatically accelerated the pace of policy and institutional harmonisation. This process brought us the likes of the ‘6+2 Pack’ legislative mandates that, alongside the Fiscal Compact, effectively superimposed risk-management and performance constraints onto the fiscal policies of member states. The same process consolidated the old European Monetary Union into a much stricter Genuine Monetary Union, further reducing member states’ ability to influence monetary policy. The Capital Markets Union, the European Banking Union and the huge host of other legislative and regulatory measures centralised EU controls over financial markets and institutions. 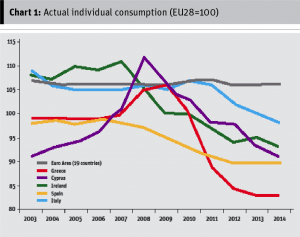 Alas, none of these measures helps to resolve the fundamental trilemmas that continue to exist. The reason for this is that removing national systems’ capacity to carry out their own policy and supervisory regimes does nothing to balance freedom of capital mobility, the need for independent monetary policy and the nature of the exchange rate regime between the euro area and the rest of the world, as well as within the euro area itself.
Which brings us to the second dimension – one less recognised by the media. Last month, the EU produced a road map, the so-called Juncker Plan, for doing away completely with the idea of democratic member states’ control over several major areas of macroeconomics.
Before 2018, the Plan envisions a set of new ‘policy coordination’ institutions – effectively a blueprint for the post-Greek-Crisis Europe. The ideas of the new Europe include expanding EU Commission powers to punish member states for implementing “unsustainable macroeconomic policies”. This represents a major remit-expansion from the Fiscal Compact that targeted unsustainable fiscal policies alone. The Plan also includes the idea of introducing, before 2018, a Competitiveness Authority whose task will be ensuring that wage inflation in individual member states does not exceed labour-productivity growth.
Beyond 2018, the Plan expands the EU’S centralised institutions to include an independent Treasury and budget. Tax convergence and social policy harmonisation are on the agenda as well, expanding the euro-area remit across pretty much all spheres of competency of the member states.
Based on a June editorial published in the Guardian which was co-authored by France’s Minister of the Economy and the German Vice-Chancellor, Brussels has “to launch an economic and social union by agreeing on a new, staged process of convergence that would involve not only structural reforms (labour, business, environment) and institutional reforms (economic governance) but also social and tax convergence where necessary (consistent, though not necessarily equal, minimum wages, and a harmonised corporate tax)”.
This is hardly surprising. On 12 January 1999, only two weeks after the introduction of the euro, the then President of Council of the EU, Joschka Fischer addressed the European Parliament, stating that “Political union, including new member states, must be our lodestar from now on; it is the logical follow-on from Economic and Monetary Union”.
The Greek crisis, alongside other crises across the euro area ‘periphery’ is a Trojan horse to push through a process of political harmonisation and consolidation designed to resolve the geo-political trilemma outlined above. Democracy can’t be allowed to stand in the way of rampant free capital markets and ECB-controlled monetary policy and exchange rates, and proper management of monetary policy cannot be allowed to stand in the way of political centralisation. •