There’s been plenty of talk about “carrot and stick” for our housing predicament.

At a property Summit last month, commentators exhumed memories from the industry boom and bust and suggested numerous ways to revive the sector. Much discussion revolved around the fact that there is no official metric for the measure of new housing output. With projected completions of fewer than 9,000 new homes this year, supply remains well short of demand.

Senior Government officials suggested that the state needed more land and would get more into active land management. Others noted how state house-building has fallen off a cliff.

Local authorities are building on average 300 homes per annum yet own enough zoned residential land to build more than 45,000 homes nationwide .

Approved Housing Bodies (AHBs) – part-funded by the state, and voluntary efforts, account for the bulk of social homes in any year, out-performing local authorities two to one. In Dublin there were 16 local authority homes built in the first six months of 2017 – AHBs completed were 174. 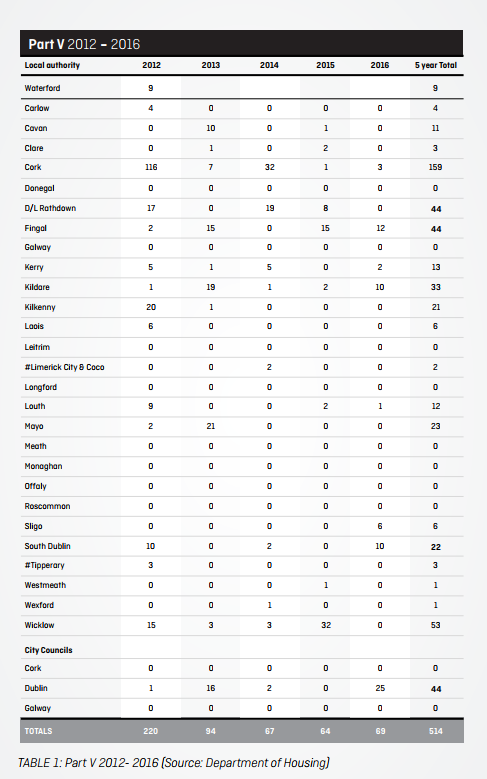 One source of new-build social homes is so-called ‘Part V’ dwellings, built by developers and sold at a discount to local authorities. Part V requires 10% of all private residential developments of ten units or more to be sold to the state at reduced prices. The discounted site cost is calculated at ‘existing use value’, a pre-determined formula.

The ‘preferred’ option is purchase of units (Part V guidelines direct Local Authorities to buy units rather than land), but land transfer can be agreed as an alternative. Indeed up to September 2015 cash in lieu of land was an option. Subsequent revisions precluded cash payments so developers can no longer buy their way out of Part V.

The Rebuilding Ireland Part V target is an average of 524 units per year. However, only 514 Part V units were purchased nationwide in the past five years (see table right).

11 Local Authorities including Cork and Galway City Councils made no Part V social housing purchases in five years. On average 9 social homes have been purchased by Dublin City Council per annum.

The current situation is in marked contrast to that of the preceding decade.

The bulk of Part V compliance, 78%, was achieved by developers providing social homes at discounted prices.

In the last 5 years the situation has changed dramatically. €29.6m was paid in lieu of land transfer by owners plus sites for just 3 homes (9 hectares). Out of a potential 1,510 Part V homes only 514 were delivered.

The bulk of Part V compliance, 64%, was achieved by developers paying cash in lieu of land transfer.

The affordable housing scheme was discontinued in 2011.

Part V was revised in September 2015 to preclude cash payments, but according to official figures €11m was paid in 2015 and €4.9m in 2016 in lieu of land transfers by developers, perhaps reflecting an overhang of planning permissions extended from before the system was changed but perhaps also suggesting that old (and bad) habits die hard. The total percentage required was reduced from 20% for schemes of five or more units to 10% for schemes of ten or more units. The affordable housing scheme was discontinued in 2011.

In the period 2002 to 2016, the total combined figure for cash in lieu of land transfers was €152m. Cash has been king for beleaguered local authorities. Extraordinarily, only three house sites have been transferred in five years.

Figures suggest that a significant number of new homes will be built in coming years with little or no social housing element. For example in 2017 our total new housing output may be close to 9,000 homes but Part V is likely to comprise just 200 units, only 2.2% of total new housing. Given the minusculity of payments during the downturn, there is the strong uncomfortable possibility that some developers, while under the control of state agencies, sought successfully to reduce the provision of social housing.

Even if there is an increase in new house-building, fewer than than 1,000 Part V social homes may be delivered by 2021. To put these figure in context, there are currently 216 new households per week availing of rent assistance (housing assistance payment) for the first time. 1000 homes would solve the problem for just five weeks worth of this backlog – by 2021!

The reality of state land management is very different from the official narrative, even if – under media pressure – the authorities have ratcheted up their rhetoric.

Official figures confirm there is little official appetite to obtain cheap land from developers and build directly, and even less inclination to pass site discounts to potential purchasers of affordable housing. Despite all the rhetoric.

Owners of land-banks who agreed to buy-out part V obligations when sites were at a historic low values can expect a handsome return on their investment in a short time. Many sites will benefit from generous capital gains-tax exemptions.

There is no official affordable housing scheme and no official definition of what an affordable house is. Last July Minister Murphy confirmed that local authorities can build 2 bed dwellings directly for €191,000 ‘all in’ cost- yet Dublin City Council is purchasing Part V units from a developer in Rathgar for €480,000 per unit .

At the property summit, when asked if there was any interest in engaging with co-operatives to pass on discounted land for affordable housing, government officials said “…we will not give land away for free.. if we did that we’d be a one trick pony”.

Plenty of carrots for land owners and speculators – who gets the stick?