Inadequacy is set to remain one of the most significant features of the welfare state in Ireland. Fiscal conservatism, lack of capacity to get traction from ‘taxability’, and failure to generate adequate revenue suggest Ireland’s welfare state will remain not up to its task. This is the somewhat gloomy conclusion to the recently published book, ‘The Irish Welfare State in the Twenty-First Century: challenges and change’, edited by us. 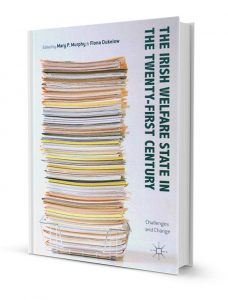 This book focuses on four dimensions of post-crisis structural change in the welfare state. It explores what welfare is for, who delivers it, who pays for it and who benefits from it. It addresses these questions for social protection, education, health, housing, pensions, the labour market, water, financial services, early childhood education and care, and corporate welfare. While new social risks and demographic trends drive welfare change, so too does globalisation, Europeanisation and financialisation. Processes of marketisation, privatisation and fiscalisation also drive welfare change in uneven and sometimes unexpected ways.

The discourse of welfare is often ambivalent and contradictory. This is most evident in exploring the question of what welfare is for. Discourse on water has shifted from of its conception as a social good to as an economic good. Corporate welfare has shifted from a developmental welfare agenda to a more explicit competitiveness and growth agenda. Social protection and activation have moved from addressing poverty and social inclusion, to addressing active inclusion through employment and a more overt work-first discourse. Third-level and further education and training has shifted from a focus on the person to a product with a focus on meeting the needs of employers and the economy.

We see more ambivalent discursive shifts in early childhood education and care that struggle to decide whether they should aim to meet the needs of the labour market or those of children. In debt and financial services a conflict exists between whether the aim is a conservative moral imperative or a social-liberal model offering the prospect of a fresh start. In social housing, we see discursive repetition of the mantras of security, quality and choice but little policy to realise such goals. Finally, in health and pensions we hear a discourse about universalisation but see a dualist public/private system.

Ireland has long had a mixed economy for welfare. When it comes to the question of who delivers welfare, rather than any outright transfer of responsibility between state, market and civil society in provision, funding and regulation, we see a blurring of boundaries. The crisis broke some path-dependent policy, providing opportunities for organisational reconfiguration to rationalise and downsize the public sector and introduce other providers.

Some of the largest and most disproportionate budget cuts were in community initiatives and development services delivered via the now vulnerable social and community sector. Credit and debt services have been changed by the instigation of a range of new institutions delivering new services with a strong market logic that filters through to civil society organisations like credit unions.

Overall, who delivers welfare seems less important than how delivery is controlled. With the concerted roll-out of neoliberal agencies and mechanisms, the market logic has pervasively infused the mixed economy of welfare. Meanwhile there has been more overt marketisation and privatisation in some sectors.

As to the ‘activation’ of employment for those without jobs, we have seen the introduction of JobPath, a private-sector-delivered service, but little significant change in the state’s role in delivering income support. As to pensions, we see a return to pre-crisis-style reinforcement of private-market funding and financing accompanied by residualisation of the public system. Housing policy is similar, with reliance on private providers for the delivery of social housing. As to water, we see the failed creation of a quasi-market institution and the fall back to a ‘state’ owned company. In health see significant re-organisation of existing state, voluntary and private systems, albeit with more privatisation, but no real reform, and abandonment of the proposed market-led universal health insurance. Education now offers private sector delivery in third level and further education and training, alongside greater managerialism where the state remains involved. In early childhood education and care there is an ongoing creeping privatisation.

Corporate welfare ie support for business is experiencing significant infrastructural and institutional change and a scaling down of state agencies. The question of who pays is interlinked with changes in how welfare is funded. Social protection shifts from social insurance to tax-funded social assistance, while employers still pay the lowest PRSI in Europe. The next generation of workers will pay even more for the present generation’s pensions, while the state subsidises the richest 20% to invest in their own private pensions.

Debt and credit markets are complex. Mortgage arrears have hit a middle-class, home-owning population, while the poor ultimately pay through over-priced credit. The attempt to shift to user water charges appears stymied and the taxpayer continues to pay for water provision. There is no roll-back of health-service user charges. People and families increasingly pay for care, or ration services. Increased user charges for those in social housing in the form of a reduction of rent assistance payments ultimately manifests as deprivation and homelessness. In education, students have experienced increased fees and higher self-contributions. Families continue to pay the highest childcare costs in the OECD. In tandem with discursive shifts, citizens are construed as customers, further undermining the welfare state’s role in generating solidarity.

It is not always clear who benefits from state welfare functions. There are well known instances of regressive redistribution and hidden beneficiaries, but often the beneficiaries are impossible to discern, with serious data deficits and a culture of not evaluating outcomes. The social protection system benefited Irish citizens during the height of the crisis through its effectiveness in mitigating poverty. However, child poverty doubled during the crisis, deprivation rates soared and the younger generation bore the brunt of social protection cuts.

Activation policy means employers benefit from the subsidisation of low pay. In healthcare, we see unequal access and unequal geographical delivery and ultimately unequal health outcomes. While banks clearly benefit from the lack of mortgage write-downs, there is a systematic lack of information on who benefits from debt and credit services. The private pension industry benefits from significant state subsidises as does the top 20% of the income distribution, albeit the state pension inches towards universalism.

Private landlords benefit from incentivisation of private-sector supply models in social housing. Education shifts to serve the economy and employers, and enables investors to make profit from private education. In water, whatever the funding model, there are investment opportunities for private investors. The market-led approach to childcare means it is doubtful whether anyone, – workers, parents or children, really benefits. Corporate welfare as investment in employment opportunities raises questions about geographic inequality and employment quality. Questions too can be asked about who benefits from government procurement policy and who ultimately benefits from a low tax regime.

Finally, what can be said about the drivers behind such structural reforms? The absence of reforms in some areas shows the strength of resistance to change, even in the context of the crisis offering pretexts for reform. In other areas, we see continuity in the slow culture of Irish policy change. Change is often incremental, reactive and hesitant.

Overall, we see continuation of a mixed approach. The reality is that pre-crisis Ireland already had significant levels of private delivery, marketisation and corporate welfare, so post-crisis what we see are simply subtle but discernible shifts in the ratio of voluntary, state and market or private provision in various sectors. Some of this has been driven by pragmatism, in a creeping fashion and often by stealth, drift and incrementalism. This differs from what has often been more ideologically charged privatisation in other jurisdictions. Nonetheless, there is evidence of neoliberalisation embedding itself in policy and delivery of welfare, including privatisation, marketisation and the various forms of governance associated with New Public Management and managerialism.

Frequently, the growth of private, for-profit providers has evolved on an ad hoc and unplanned basis in privatisation by default. In water, health, housing, activation/public employment services and credit services, we see not a roll-back of state institutions to make room for private actors, but new forms of state regulation of private actors. Some attempts to create quasi-markets have failed and the default reliance on the state as the provider of last resort has been restored. In other sectors, the state has successfully led development of private markets. In early childhood education and care 70% of provision is privately provided, private providers now dominate nursing home provision, while half of all rents received by private landlords come from social housing.