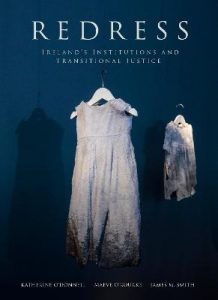 This edited collection of essays was published on 21 May 2022.

On 27 July 2022 the Irish government approved a proposal to establish an independent office to lead an intervention at the site of the former Mother and Baby Home in Tuam. The intervention will involve the excavation, recovery, analysis, identification (if possible) and re-interment of the children’s remains located at the site.

On the same day the United Nations Human Rights Committee published its report on Ireland noting “While welcoming the State party’s efforts to address and memorialize the past human rights violations and institutional abuse of women and children in the Magdalene laundries, children’s institutions, and mother and baby homes, as well as the State party’s recognition of its shortcomings in previous actions, the Committee recalls its previous concerns on the climate of impunity.”

A climate of impunity and collusion which continues to demand intervention by way of an independent human rights compliant investigation and full disclosure of all records in order to ventilate the right to truth so wanted by so many women and children.

Including Number 54 – Mary Harney – who is not ‘pig’ , who is not ‘smelly pig’. Mary Harney born Bessborough Mother and Baby Home, not ‘eligible’ to be trafficked to America, illegally fostered then sentenced to twelve and a half years in the Good Shepherd Industrial School (pages 3 -4).

Mary Harney who still waits for truth, justice and accountability which, to take W. B. Yeats out of the context of peace, comes ‘dripping slow’.

“We did not just hide away the dead bodies of tiny human beings, we dug deep and deeper still to bury our compassion, our mercy”- (Enda Kenny 18 March 2017 quoted at page 43)

Five years on women and children still wait for the burial of Irish compassion to be exhumed and examined in the ways urged by the UN Human Rights Committee in accordance with human rights standards demanded by both ‘hard’ law and ‘soft’ justice – from criminal process to transitional justice – through police and coronial investigations, through disclosure of information to establish identity (page xi) and to establish a public record of truth, an inalienable human right – to know why.

This edited volume of essays is a valuable contribution to that truth-seeking process and how the right to truth can inform redress in a scheme of transitional justice (from darkness to light).

In their Introduction, the Editors describe the genesis of this project by way of a two day conference at Boston College where different voices spoke on and were heard on the subject of ‘Reconciliation, Truth-Telling and Institutional Abuse in Ireland’. These were the voices of ‘scholars, policy makers, survivors, people affected by adoption, artists and advocates’ (page xiii).

The voices of the survivors have so often to date been excluded from or silenced by the processes established by the state agencies (South and North) – the very agencies of truth-seeking that should have served to facilitate hearing those voices and enabling them to ask questions, to interrogate those responsible (civil servants, local councillors, clerical officials, bishops, law officiers, ‘sisters of mercy’ and others), to give their accounts of systemic abuse and suffering that was the evil of these institutions and processes (symphysiotomy, forced adoption, unlawful clinical trials, trafficking, illegal fostering, slave labour, disappearence) constituting Ireland’s crimes against humanity.

This is a compelling collection of essays, testimonies, analysis and interrogation. It is at times both intensely emtoional, as you would expect from the territory on which it reports, and intensely theoretical. The balance between the voices is  right. It is compelling because of the scope of the territory: from the loss and denial of identity of the survivor of institutional abuse, to the empty rhetorical gestures of state and church, to the manipulation of the public narative, to the closure of access to truth through the politics of information and the play of slippage of responsibilities. Then and Now.

The authors are survivors, artistists, lawyers, academics. Some of the material has been previously published but is now usefully collected together creating a ‘source book’ for further activisim and reflection on redress.

Those turned to in these essays include Seamus Heaney, James Joyce, Sophocles Antigone, Giorgio Agamben, Jacques Derrida, Michel Foucault,  Gillian Rose. Perspectives are provided from contemporary thinking around the idea of the archive, the nature of archeology and preservation, historiography and epistemology.

For example, Joyce’s Dubliners is deployed to interrogate institutional abuse in a Protestant setting. Heaney on poetical redress powerfully provokes thought on the shape of redress for survivors. Agamben is drawn upon in terms of shame and the collapse of the ‘sovereign self’. Gillian Rose’s thesis The Broken Middle describes social ruptures that cannot be repaired – the cleaving of Ireland – now a Potters’s Field (to apply Rose in a different voice) or cillíní. And always the figure of Antigone so oft drawn upon when considering the fate of Ireland, its women and children.

To conclude: for Ireland this collection and the continued out-workings of the tragedy of abuse is a work in progress, a work to inform policies to secure redress, a work to enable access to justice, a work to prise open the vault that is the archive of truth, a work to establish identity and to continue to give voice after the violence of the imposed silence of the abused; both by the ‘sacred’ and the ‘secular’ – the forces of church and state. The force of law without justice or God.

All royalties generated by this volume will be donated to Empowering People in Care (EPIC).