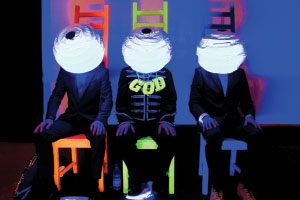 There is a new generation of Irish theatre-makers. They are here, they have things to say, and they have exciting new ways of saying them. In a time where, more than ever, we need to take a hard look at our surroundings and imagine a way forward, these artists are here to help us along the way.

The Dublin Fringe Festival (Absolut Fringe) has come to an end for another year, and a consensus is growing that it has been the most successful Fringe ever. A large number of new companies and artists presented new and cutting-edge work to sold out audiences across the two weeks of the festival, proving that there is a huge appetite and eagerness for such work. Many companies presented work that inspired us to imagine Dublin in a new way, such as The Company’s As you were now so once were we, a witty contemporary riff on Ulysses that made theatrical magic out of the everyday, packed houses at Project Arts Centre and was rewarded with the Best Production Award. Grace Dyas’s provocative Heroin told how the drug has ravaged Dublin in an audacious staging which became a metaphor for the addiction itself. Anu Productions’ World’s End Lane mapped the red-light district of the past onto the Foley Street of the present, and my own company Playgroup’s Berlin Love Tour led the audience on a tour of Berlin along the streets of Dublin, inviting them to exercise their imaginations and look at their own city in a new and surprising way.

In a year where there has been much discussion of arts funding and the cuts that threaten the sector over the coming year, it is important to note that the above projects and many others that captivated and provoked audiences during the Fringe were supported by Arts Council project funding. In a year when many established organisations had their foundations shaken by severe cuts, this major vote of confidence by the Council in the artists who are carving out the future of Irish theatre must be applauded. This generation are making work which is utterly of the present, dealing with the past and the future, exploring new forms of theatre-making and storytelling, and drawing large and enthusiastic audiences in the process. Companies like Randolf SD | The Company and THISISPOPBABY are developing radical new musical theatre which presents contemporary Dublin through song, blowing the dust off this popular but sometimes maligned artform. Brokentalkers and Una McKevitt are leading the way in new models of documentary theatre, putting real lives on stage. It is only a matter of time before these passionate and talented voices as well as those I have already mentioned start taking over the main stages of the country as well as major international stages with their vital new work which is defining Irish theatre in 2010.

Indeed this takeover may be starting to happen. We have already seeen two major productions by Wayne Jordan at the Abbey this year, while THISISPOPBABY have shaken the national theatre’s foundations with their poptastic and provocative club-night WERK in the Peacock bar. Wayne Jordan, Aoife Spillane-Hinks and I are directing major work by Beckett, Pinter and Mamet at the Gate for their BPM retrospective at the upcoming Ulster Bank Dublin Theatre Festival, and Una McKevitt has also been invited to the Theatre Festival, with only her second production as a director, to present her unique vision of documentary theatre in which she puts her family and friends on stage to tell their own stories. These artists are taking on the establishment but also working within it, finding appreciative audiences who are keen to be challenged with new forms and ideas.

Of all the art forms, the theatre demands that audiences use their imaginations, open their hearts and minds to stories and ideas, and reflect on their own lives through the events they see unfolding in front of them.

At a point where we need to learn how to imagine a new future for ourselves and to plot our way throught the crises that have befallen our country, the theatre and the arts as a whole are crucial to our economic and social recovery. The arts project a hugely positive image of Ireland on the world stage in a time where such a positive image is becoming increasingly difficult to maintain. The arts are a major employer in this country and well as one of the principal drivers of cultural tourism. They embody the radical and creative spirit of our small island and provide a prism through which to examine ourselves and the society in which we live, driving the smart economy and fuelling imaginative thinking.

But none of this can happen unsupported. By funding the arts, the State can acknowledge its role in the economic and spititual recovery of the nation and provide a catalyst for a major artistic explosion which can take us through the dark days ahead and help us forge a new future for ourselves. The revenue returned into the Exchequer through the cultural and creative sectors greatly exceeds the State investment in culture: compare the State investment of €330 million in the cultural sector in 2008 with the direct exchequer revenue of almost €1 billion from the cultural and creative sectors. (This statistic as well as other extensive information can be found in the National Campaign for the Arts plan of action, at http://www.ncfa.ie.) So in effect the net cost to the State of such subsidy is negligible, while the economic, social and imaginative benefits are considerable.

The stage adaptation of Beckett’s early novel Watt, which I am directing with Barry McGovern at the Gate for the upcoming Ulster Bank Dublin Theatre Festival opens with the line: “The only way one can speak of nothing is to speak of it as though it were something”. This leap of imagination may be just what we need to find out way out of the crises that are in danger of paralysing us. A new generation of theatre makers is embracing possibility rather than despair, and finding new and important ways of articulating what it means to find one’s way in the world. An investment in this future will reap dividends that we cannot yet imagine, and enable these new voices to help us imagine a new future for ourselves.

Tom Creed is a theatre director. He is a co-founder and joint Artistic Director of Playgroup, an Associate Director of Rough Magic and Theatre and Dance Curator of Kilkenny Arts Festival. He is directing Beckett’s Watt with Barry McGovern at the Gate Theatre and Ian Wilson’s Una Santa Oscura at Smock Alley Theatre as part of the current Ulster Bank Dublin Theatre Festival.