Democracy poses a threat to Israeli governments. By Kevin Barrington 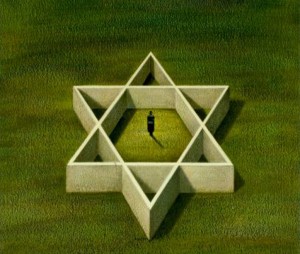 The theocratic nature of Israel has for too long been concealed behind the empty slogan ‘the Middle East’s only democracy’. The idea of a Jewish state is tolerated and defended by the same ‘progressives’ who shiver at the mention of an Islamic one. And while the US railed against the brute nature of the Taliban’s Islamic state it rallies in defence of the anti-democratic idea of a Jewish one.
Worldwide indignation was aroused by the insult to modernity that was the Taliban’s use of the chador. Yet somehow the world is supposed to find acceptable Israel’s use of that appalling medieval phenomenon: the siege. Afghani woman were ‘imprisoned’ inside the chador. A whole Palestinian people is imprisoned inside Gaza.
Like all religious states, Israel’s true anti-cosmopolitan nature has rarely been debated. Ironically, it’s the secular, democratic desires of the Arab Spring’s protests that have thrown an unforgiving spotlight on both the Jewish State’s backwardness and its fears of change to the region’s retrogressive status quo.
‘New historian’ Israeli Benny Morris believes that an ethnically-cleansed religious state was Israel’s aim from the very outset. When global awareness started to render unacceptable the policy of ‘transfer,’ a more subtle, but equally evil, policy of ‘politicide’ was adopted. Politicide is an attack on any of the constructs that define people as a nation. Its aim is to deprive people of hope and to encourage emigration through despair.
The leak of the Palestine Papers – diplomatic correspondence about the Arab-Israeli peace talks from 1999-2010 – further undermined Israel’s pretence at being the rational peace-seeker faced with a delinquent, intransigent partner. Predictably, the bulk of the media supported this pretence. Most coverage told us how a corrupt Palestinian Authority was prepared to sell its people’s aspirations short while the leaders lusted for the perks of power. But what the leaked papers really revealed was the flip side of this tale of treachery and greed: the fact that the Palestinians were prepared to bend over backwards for a peace deal.
Yet still they got nothing. And the world was spun the fallacious rehash of the Palestinians “never missing an opportunity to miss an opportunity”. Neither the democratic challenge of the Arab Spring nor the truths revealed by the Palestine Papers has curbed Israel’s backward ambitions. Instead the world witnessed Benjamin Netanyahu getting 29 Congressional standing ovations whilst bluntly rejecting Obama’s call for a ‘1967’ based peace deal – a plan which Israel’s continuing policy of creating facts on the ground has rendered nearly redundant.
Like a true zealot, Netanyahu treated us to a paean to old-fashioned greed and territorial expansionism which if uttered by an ayatollah would have made many a young Iranian blush. But Netanyahu can’t even hear the supposed ‘sense’ of the Israeli left as they currently proclaim that a ‘1967’ based plan is the best deal modernity will offer to that ultimately offensive and outdated concept: the religious state.
A democratic deficit, to put it mildly, is the hallmark of all of Israel’s Arab neighbours. But, despite oppression, it’s the citizens of those countries who are out on the streets bravely demanding that they be granted the decency of a modern democracy.
The Arabs leaders may now quake at their peoples’ demands. But they are not alone in their fear of democracy.
“More and more Palestinians are uninterested in a negotiated, two-state solution, because they want to change the essence of the conflict from an Algerian paradigm to a South African one. From a struggle against ‘occupation,’ in their parlance, to a struggle for one-man-one-vote. That is, of course, a much cleaner struggle, a much more popular struggle – and ultimately a much more powerful one. For us, it would mean the end of the Jewish state.”
Thus spoke the former vice-prime-minister in Ariel Sharon’s government, Ehud Olmert, talking to the Israeli paper Haaretz in 2003.
Olmert was recommending Israel impose a unilateral solution to safeguard the Jewish state and protect its religious status from the fatal threat of one-man one-vote. Olmert shows us that many in Israel, safeguarded by nuclear weaponry, see0 its real existential threat not in Arab armalites but in the ballot box.
Olmert told Haaretz that his “formula for the parameters of a unilateral solution are: To maximise the number of Jews; to minimise the number of Palestinians; not to withdraw to the 1967 border and not
to divide Jerusalem”.
The newspaper noted that Olmert’s language was that of “long ago” adding that the former vice prime- minister hankered “unabashedly for those more hopeful times.” It seems those more “hopeful times” were back when the ethnic cleansing implicit in ‘minimising’ Palestinians was a more acceptable pursuit.
Olmert’s language does indeed hark back to “long ago”. Because in the 21st century, when it comes down to a choice of religion over democracy, the answer must be quite simple. And when religion involves the complete abnegation of democracy, the question ceases even to be legitimate.