In the arts in Ireland, cynics tend to disdain the cor­relation between a practitioner’s body of work and its press material. But for Cork-resident quintet The Altered Hours, a seemingly vainglorious claim to “exist within a swirl of the hypnotic” is not too far from the band’s sonic mark. Striking a gentle balance between psychedelic rock’s thoughtful abandon and dour post-punk precision via shoegaze’s more sparse reaches, the band’s current fuzz-laden attack is the upshot of years of experimentation across a number of singles and extended-players, no surprise given its members’ roots in the Leeside city’s mid-aughts folk and improvisation scenes.

In January of last year the band, fronted by the duo of guitarist/vocalist Cathal MacGabhann and musical poly­math Elaine Howley, finally released its debut album after nearly eight years together. ‘In Heat/Not Sorry’, recorded in Berlin’s Funkhaus studio in the early part of 2015, arguably sees the band at its most focused, as per­haps best evidenced on walls of sound like pre-eminent album standout ‘Way of Sorrow’.

MacGabhann opines on what brought about such a wait, and how the creative experiences that led to the album informed the band’s curiosity for wider horizons:

“We could have probably put an album out earlier than we did, but we were excited to continue working with Fabien (Leseure, engineer/producer on the band’s epon­ymous E.P.), so we took the time to arrange a date, and store up all our songs for this one-month-long recording session with him. I’m glad we did, as I loved working with him, and he taught me a lot. If I’ve learnt anything from those initial releases, it’s that I enjoy changing the envi­ronment around us from project to project. It causes you to push with and against new ideas and learn from expe­rience, not from fear of change”.

“We don’t think about it too much, especially the live show. We are just very passionate about our music, and music in general. We are always just ready to play, so we don’t need a particular ritual to get us going. It’s always there”.

The band’s directness of sound comes from its collec­tive creative process, as the years have given the Altered Hours a keenly-honed feel for what works and what doesn’t, once the jam-sessions exploration is over. This instinct with which the band has operated in recent times was the modus operandi of the record’s creation.

“What happens with me is, I’ll just be making up some­thing constantly, either half a song, a beat, bass line, ranting and humming into my phone, or just song names or whatever. It’s running through my mind, 24/7. So when it came to recording this album it was just a matter of picking out what we wanted from a large bunch of ideas and jams we had to create an album”.

Being transplanted from the relative comfort of Cork city, where the band has been at the centre of the musi­cal community via its presences in a succession of DIY studios and rehearsal spaces, to the frontier of the German capital in the post-hipster gold rush, presented its challenges, but also placed MacGabhann in his ele­ment. “Coming from rural Ireland, I think I have quite a hunger for large cities, as it still feels exotic to me. So getting the chance to record in Berlin has been nothing but a pleasure”. 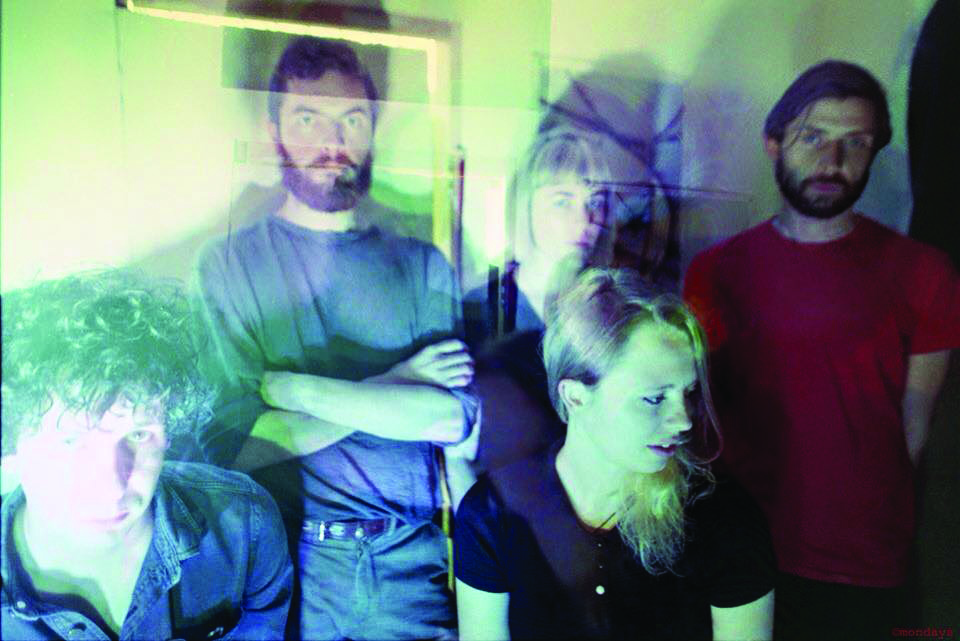 ‘In Heat/Not Sorry’ was released in a joint effort between Cork-based record labels Art for Blind, since relocated to Sligo’s Model Arts Centre, and Penske Recordings, founded by Irish indie-music cornerstone Albert Twomey.

While it’s far from unusual to see independent or DIY labels split minor releases in order to keep costs down or burden-share the work of releasing a record, such col­laboration is seldom seen for a band’s debut LP, usually the preserve of a label establishing a routine and bottom line for its newly-acquired property. It’s a relationship built on trust and mutual respect between all the creative and administrative stakeholders, one which MacGabhann is evidently at ease with. “We’ve grown a very strong relationship with both Art For Blind and Penske. It feels great to release music with them, as they’ll always be on your side and treat every group or release with support and an open mind. Just really nice people to work with”.

The album has been received well by critics and the wider music community: glowing reviews in print hold­outs Hot Press and The Thin Air followed a positive reception from the blogosphere and social media to advance streaming singles, with no greater authority than the Irish Times weighing heavily in the band’s favour despite questions about the concept-art aspect of the LP. From there, the band arguably became the country’s worst-kept musical secret, with sold-out shows for the likes of Aiken Promotions as well as com­prehensive continental touring. “I guess we got to gig a lot more since that release, which we welcomed with open arms. It’s my favourite way to expend energy”, smiles MacGabhann. Seeing the band in action dispels any notions of pretension or studiousness. A finely-tuned machine, the “swirl of the hypnotic” becomes more of a whirling dervish. Howley’s otherworldly, stage-consuming charisma and lead guitarist Kevin Ter­ry’s slivers of ingeniousness dominate amid the chaos. The band’s reputation for fierceness stems from the same forthright approach that informs them as creators. “We don’t think about it too much, especially the live show. We are just very passionate about our music, and music in general. We are always just ready to play, so we don’t need a particular ritual to get us going. It’s always there”.

The band’s status as a flagship for music in the south­ern capital registered when the band was hand-picked to play the final night at community-central gig venue Gulpd Cafe before its closure earlier this summer. Cork is currently in the grip of a crisis for the arts, with most of the city’s major multipurpose spaces closing, scaling down or relocating because of property-market pres­sures, among other factors. Licensed gig venues are also rarer than in the boom years or even the bust, despite the town’s renown as a cool second city which stems mostly from its history of off-kilter music and spaces. Affinity for the city’s artistic underbelly is what keeps MacGabhann there.

“I moved to Cork by chance. Some close friends were moving there for college, so I just followed and got work. I’m glad I did, because it was a wonderful place to start a band, especially during the recent recession. It allowed us to haunt some very interesting abandoned buildings. It’s a shame to see this huge shift happening again in Cork, and all the venues and spaces that closed in recent months. But I think as long as everyone keeps making stuff, then the arts community can’t die, and it will always find a place to prevail. The boom can come and go, but ideas outside the realm of commerce will remain. This isn’t ideal, but it’s an idea worth holding on to”.

Word has emerged of a new Altered Hours extended-player on the way, the result of a further pared-down set of sessions that seems likely to further distill its knack for wild variety. But what might seem to listeners and critics to be small steps upon its eventual release repre­sent a giant leap for the band’s mission to retain its independence and creativity, as their dogged self-direc­tion has extended from the jam rooms and into the production suite.

“We just finished it, and are getting it ready for a release very soon. We recorded it mostly live in studio. This one was recorded as quickly as possible so it’s a little closer to that live sound, I think. We mixed this one ourselves, and I really enjoyed that”.