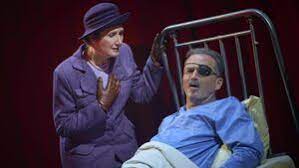 Perhaps Edna O’Brien is the greatest Irish author alive. ‘‘Country Girls’, Ireland’s ‘Bell Jar’, remains as gripping and elusive now as it must have been when it was first published. Bookshelves all over the country are crammed with inferior imitations by younger authors. O’Brien always exercises tyrannical verbal control of her writing. In ‘‘Country Girls’, that control is exerted to a stifling degree to portray a mind so straitjacketed it can barely express its own thoughts.

On the other hand, ‘Joyce’s Women’ is a failure. Ironically it fails because of that same quality which made O’Brien’s writing so good throughout her life: here the straitjacket of control on the writing is unbearable in a bad way.

The play’s characters are a variety of women from James Joyce’s life (of whom three appear the most: Joyce’s wife Nora, his daughter Lucia, and Nora’s housekeeper Brigitte), as well as Joyce himself and a few others.

What turns O’Brien’s way of writing from good to bad here is the stage. Onstage everything feels stilted because there is no drama, nothing dynamic between the characters: they walk on and off, on and off, in-between they do not so much converse as deliver monologues about themselves, their pasts, their feelings. Even in these it is like they are indifferent to everything, the way ghosts are indifferent, because between them and every care there is the unscalable barrier of death.

There are people who have managed to make this kind of play work on the page – I can think of TS Eliot’s ‘Murder in the Cathedral’ – but if there is a good reason plays like this are not staged commonly, this show exhibits it.

Above all this show’s cast exhibit it, because clearly, they read the script and did not know what they were supposed to do

Above all this show’s cast exhibit it, because clearly, they read the script and did not know what they were supposed to do. They had been hired to deliver dramatic dialogue for a show that did not really have characters. Obviously, the direction they received was either not clear enough or simply not good enough to bridge the space between the actors and the author.

And so, like most actors when they do not know what to do, they chose to act against the script’s grain by performing their characters as the most stereotypical images of people possible. They read the script and decided to go to war with it.

Something similar happens most of the time when actors are called on to play Shakespeare. The dialogue resembles nothing like modern speech, but the actors’ whole skill is at playing modern personalities. As a result, they play the script the only way they can: by amplifying, to a deafening and inhuman degree, the faintest sound of that personality in whichever character they are playing. The distortion is necessary to twist the lines into what the actors want them to be, but the effect on the drama is fatal. Goneril and Regan are spiteful and obvious grifters; Hamlet is a nice young man plagued by an unfortunate disease; Prospero is doddering and sentimental.

The way out of this problem for a production team is to breathe deeply and work with the script they have rather than the one they wish they had. If the production team of ‘Joyce’s Women’ had done this, I do not know what would have happened. It is possible, perhaps likely, that the play as written is simply unworkable on the stage. But even if it had failed, the result would have been a more interesting failure than this one, which is so ordinary you will have forgotten it by the second drink in the pub afterwards.

But, in defence of the cast, let me make two further observations about the writing. The best part of the entire show is the brief cinematic interlude that plays out on a large screen descended over the stage, depicting Lucia’s time in an asylum. It is the best part, not least because of the welcome dynamism afforded by the big picture and loud volume of the recording; those who fell asleep during the earlier scenes are likely to have been woken.

But more than that, it is because Lucia’s story gives O’Brien a chance to use some of her obvious abilities to good effect. Two brilliant moments – when Lucia covers her face with the lunchtime gruel, and when she and the other inmate huddle together beneath a bedsheet – achieve the power of symbols. They are both like a prism through which the play absorbs and lets out multiple perspectives at the same time.

What constrains the show’s ability to do this throughout the entire rest of the performance is the half-hearted simplicity of its central opposition between Joyce, the capital-A Artist who flits around among the cicadas of his mind, and the women – his women – whose lives are all damaged by this tendency.

The opposition is half-hearted because none of the women seem overly to mind Joyce, and in no serious way does the play condemn him. The idea that things would be better off if Joyce had not written his books is never really contemplated.

It is simplistic because it presents Joyce as an escapist, a dreamer, an artist of the kind talked about in the newspapers, and despite every quote in the script from his writings (as well as other works of Irish Literature), the play demonstrates no interest in what the books of Joyce are about.

It strikes me that the author of ‘Ulysses’ had something different in mind than escaping to catatonic beauty when he wrote about the inmost dull thoughts of two men and a woman over the course of a single day in which basically nothing happens to any of them.

If the more accurate image of Joyce and his art had been let into the play, it would have made him more comprehensible and perhaps less forgivable at the same time. In their more complex relation to this real Joyce, it might also have given the play’s women, who are after all supposed to be real women, people who once walked on the earth, a space to become themselves. Or else – even if not – it would have been an interesting failure.

‘Joyce’s Women’ runs in the Abbey Theatre until 15 October