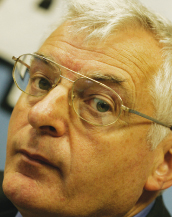 A General Election must be held at the very latest in two years time. Very possibly it will take place much earlier and may be triggered by the Green Party suddenly discovering that it has an irreconcilable ‘principled’ difference with Fianna Fáil on some issue and therefore has to take the ‘selfless’ decision to walk out of government. Such cynical opportunism comes easily to the leadership of the Greens faced with the need to rehabilitate themselves with former voters dismayed by their abject capitulation to Fianna Fail.

It is very likely that the Labour Party will form a coalition government with Fine Gael in the wake of that election unless the political landscape is altered far more radically by seismic movements of working people in opposition to the savaging of their living standards and public services. For this reason both of these parties must now be obliged to be very specific on the exact economic policies they would implement in government.
There is a fundamental dishonesty about Labour’s approach to General Election campaigns. The party puts forward a detailed manifesto for the campaign but pointedly fails to explain to voters which elements can be conveniently dropped after an election to make possible a coalition with Fine Gael. Equally, it fails to state which elements of Fine Gael’s manifesto it may accept in a Programme for Government even if it clashes with its own.

The economic crisis of Irish and European capitalism and its consequences will most likely dominate the coming election. There is a fundamental choice to be made by any political party seeking to be in power. Does it accept the basis of the present policy which is that working people, pensioners and the poor are to continue to be saddled with the consequences of the economic crimes and contradictions of a system dominated by speculators, developers and sharks in the financial markets? Or does it fundamentally challenge that system and campaign for an economic, social and political transformation – revolutionary changes in fact – to the present set up?
Were the Irish Labour Party true to the ideas of its founders, including James Connolly and Jim Larkin, it would adopt the latter course. It is clear, however, that it will not, but will opt for the current policy with some cosmetic changes.

The Labour leadership condemned the savage cuts in the pay of low- and middle-income public sector workers. That is easy to do. But then, treacherously,  it demanded that these workers should meekly accept the blow. Leader Éamon Gilmore criticised the limited strike action of public-sector workers last year and also the work-to-rule by members of the Civil and Public Services Union this year. He steadfastly refuses to say whether he supports the so-called Croke Park deal – claiming this would be political interference in industrial issues.

This is an incredibly cynical position for the Labour Party to adopt. The party was founded, after all,  as the political arm of the Labour movement. This deal represents an abject betrayal of the trade-union leaders who were sent into the talks by their members to secure a reversal of the pay cuts, only to emerge with the cuts still in place and a whole raft of other attacks on working conditions besides. Labour is silent because the party would itself insist on such a deal if in government.

In Spain, Greece and Portugal the sharks in the financial markets – international investment banks and hedge fund operators – are raking in billions from their manipulation of the current crisis. Working people are being crucified to pay for their speculation and for the crisis in general.

It is so-called Socialist parties which are implementing the cuts in each of these countries – socialist parties with which the Irish Labour Party is affiliated and shares an outlook. The reality is that all the Social Democratic and Labour Parties in Europe have capitulated to the pressure of neo-liberal capitalism over the last twenty years. All embrace the market and therefore the rules of the market and the right of the financial speculators to exercise the kind of dictatorial power over economies and society that is now increasingly clear to all.

The political result of all this is a Europe-wide vacuum on the Left. The genuine Left, those who seek the ending of capitalism and socialist change are therefore confronted with the task of constructing a new mass party of working people which will seriously fight for this; and that means also standing four square in active opposition to the present attacks on living standards, jobs and public services.