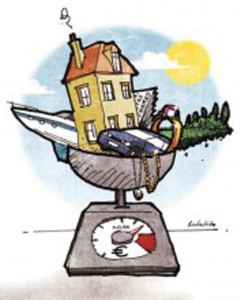 Taxes can serve all sorts of positive policy goals including redistribution through a tax on property, which constitutes three quarters of private wealth.

Learning to love property tax requires a perspective on the purposes and types, of taxation. The purposes of taxation include financing government spending; and promotion of greater equality, reduction in the use of harmful goods and the protection of local enterprise.

In Ireland there has for long been an unimaginative over-emphasis on income and consumption taxes. For example, despite the on-going high levels of unemployment, income tax in 2012 made up 42% of the total tax yield compared with 27% in 2006 at the height of the boom. This creates a problem since high rates of income tax tend to impede job creation. As a result, Budget 2013 introduced base-broadening measures which are considered to be less damaging to economic recovery and job creation than income-tax increases. This magazine believes in government spending to promote high quality of life, in the promotion of radically greater equality and in the reduction of pollution, especially greenhouse gas emissions. Taxes to those ends must be supported and we should all have a vision of where the tax burden should fall.

There should be a balance of all the forms of taxes cited above, with no tax overwhelmingly pre-eminent. Capital gains and acquisition taxes, wealth taxes and pollution taxes should be far more widely deployed in a society where equality and sustainability are driving goals.

All the other taxes should play strengthened roles, perhaps especially – since the abolition of domestic rates, wealth taxes. Wealth is as sure, indeed surer, an indicator of riches, as income.  As such it should be taxed scrupulously. Perhaps the primary reason for not so doing has been the ease of collection of income tax – at least from PAYE taxpayers.

A property tax is an, admittedly somewhat imperfect, surrogate for a wealth tax. The main strategy to reduce the pressure on income tax in Budget 2013 was the introduction of the Local Property Tax which is expected to yield €250 million in 2013 and €500 million from 2014 onwards. €250 million is the equivalent of just a 1% increase in the standard rate of income tax. There is clearly therefore scope for increase.

So when people talk about taxing wealth in this country, they are talking principally about taxing the homes that we live in.

According to economist, Ronan Lyons, “In Ireland, as of 2006, deposits made up 10% of Irish wealth, equities a further 8%. Pension and investment funds – wealth holdings of unknown type but likely to be a mix of mainly equities and bonds – made up a further 11% of wealth. But it was property that was the overwhelming type of wealth in Ireland, making up 72% of all wealth. The vast bulk of this was residential property. And that picture is not likely to have changed substantially with so much of Irish equity wealth being invested in the banks, which are now all next to worthless. So when people talk about taxing wealth in this country, they are talking principally about taxing the homes that we live in. In second place comes taxing the deposits we have in the bank. Make sure to mention this to the next person who says ‘We don’t need a property tax, we need a wealth tax’”.

Lyons himself argues that a property tax should take the form of a ‘land value tax’ on the unimproved component of land – encouraging owners of land to optimise its use, since they are paying tax as if they have already done so. If such a tax is linked to proper zoning and planning it can be used to steer high-quality, well-planned development, so improving quality of life.

Economists note too that such a tax does not deter production, distort market mechanisms or otherwise create deadweight losses the way other taxes do. This is presumably why a commitment to such a version of the property tax was in the coalition’s programme for government. Difficulty in explaining the concept ie feeble-mindedness led to its supersession.

Property taxes, such as the one now being imposed, that include the value of buildings on land are less efficient, since they are, in effect, a tax on the (desirable) investment in that property. Even so, they are less likely to affect people’s behaviour than income or employment taxes.  Almost any tax is better than income tax since that taxes the ‘good’ of work, not some ‘bad’ like underuse of land or pollution.
Economists like property taxes since, in an efficient capital market the burden of property taxes is borne by owners of capital across the economy; and since capital owners tend to be richer, the tax is likely to be progressive. Furthermore property taxes are a stable source of revenue in a globalised world where firms and skilled people can easily move.

They are also less prone to cyclical swings. US state and local governments have seen smaller recent declines in property taxes than in other forms of revenue, largely because the valuations on which tax assessments are based were adjusted more slowly and less dramatically than actual prices. Property taxes may even restrain housing booms by rendering it more expensive to buy homes for speculative purposes.
According to publicpolicy.ie’s Jessica Worth, the following are some of the advantages of the  Local Property Tax being imposed in Ireland:
*    The economic impact is expected to be relatively small since a recurrent tax on residential property is deemed much less distortionary than a tax on income or capital.
*    It is a reliable, sustainable source of revenue. Revenue generated from immobile assets is more stable than from property transaction taxes such as Stamp Duty and Capital Gains Tax.
*   It will give local authorities an independent source of revenue, and enable citizens to exercise choice over the amount of public services they receive.
*    It is progressive since it is assessed on the market value of the property unlike the flat rate Household Charge.

Still, people don’t like property taxes. Mario Monti, Italy’s former technocrat prime minister, lost the election earlier this year for many reasons but his much-loathed decision to raise a tax on property played a substantial part. Asked in surveys what is the worst or least fair tax, Americans consistently cite property taxes. In Ireland there has been an aggressive campaign against the property tax, ironically spearheaded by the radical left (motivated by twin goals – to subvert a regressive government and ratchet pressure on government not to repay global speculators); and some 27% of owners of second homes have yet to pay the NPPR charge – despite the passing of the payment deadline.

According to the Economist magazine: “Voters hate property taxes because they are what economists call ‘salient’: the burden is obvious, easy to calculate and hard to avoid. An intriguing new paper by Marika Cabral and Caroline Hoxby at Stanford University shows what a difference this makes. Most American homeowners pay their property taxes in one or two lump sums during the year. Around a third (mainly those with mortgages) have their tax payments bundled in with monthly mortgage payments. The economists find that how people pay their property taxes affects their tolerance for them. The more people pay in lump sums, the lower property taxes are likely to be. For property taxes to become a much bigger source of revenue, governments must apparently ensure people don’t realise how much they are paying”. Too late for Ireland!

Other practical problems anticipated in the case of Ireland include, according to publicpolicy.ie:
*   “Some homeowners may under-estimate the value of their property. It has been suggested that random audit checks may address this problem.
*    It may be difficult for those in rural areas living in their home for maybe 30 or 40 years to estimate the value of their property when only new builds surround them, and also each build is unique.
*    Although ‘fairer’ than a flat rate charge, given that is based on the market value of the property it will not be based on peoples’ incomes.
*    Difficulties may arise when assessing the amount of tax due from properties that are close to the edges of the taxable bands.
*    Due to a shortage of transactions in the property market it may be difficult to determine the market value of many properties.
*    Differences in tax rates among local authorities could create distortions. Specifically, low tax rates on the periphery of urban areas may encourage sprawl.
*    It may be perceived as an urban property tax since properties in urban areas are usually more expensive and so liable persons will pay much more than their rural counterparts.
*    The only other countries that use a self-assessed property tax are Tunisia, Thailand, Hungary, Bogota in Columbia, and The Philippines”.

Property taxes are much less pervasive than they once were but they are not new. Ancient civilisations from Greece to China had levies on land. The Byzantine Empire had a hearth tax from the seventh century. In 11th-century England the Domesday Book, a record of who owned what land, documented William the Conqueror’s tax base. Britain had window and hearth taxes in the 17th century – well before it introduced an income tax. In America local governments have raised money from property taxes since the colonial era, though the federal income tax has been in place only since 1913.

The trajectory of momentum internationally is unclear now.

A recent survey by John Norregaard of the International Monetary Fund suggests that the average rich country, including all levels of government, raises under five percent of total tax revenue from annual levies on land or buildings. The norm in middle-income emerging economies is lower still, at around 2% of all tax revenue. Property taxes are most aggressive in English-speaking countries. In the US they still comprise 17% of all government revenue; in Britain  around 12%. Only 2% of revenues come from annual property taxes in Germany and Italy. In Australia and Britain taxes based on property are the only source of local-government tax revenue and local authorities in the US get around 70% of their revenue from property taxes. In Ireland the figure in 2006 was 9%, up from 4% twenty years earlier. And still rising.