I recently concluded a criminal case in the Crown Court in Manchester; a city I had not visited in over 20 years. Much has changed while I’ve been gone. It is a little less frenetic, with no Tony Wilson or Hacienda club, and a good deal more gentrified. Salford, the traditional working-class area, immortalised in the works of such working-class poets of music as John Cooper Clark and Mark E Smith, is no longer as bleak and industrial as it was 20 years ago, but has acquired a glossy riverside sheen, or rather façade. Appearances are always deceptive, and much is still very rundown indeed.

Perhaps the most famous chronicler of Mancunian and Northern working-class existence is the painter LS Lowry, to whom there is dedicated a fabulous museum in the designer-revamped Salford: a huge treasure, free to the public and staffed by authentic people of the utmost friendliness. The museum is there, along with a northern version of a Daniel Libeskind structure – actually designed by James Sterling, containing the imperial war museum, northern branch; two theatres; and sundry other cultural delights.

The paintings, once seen en masse in the beautiful gallery in the Lowry Centre, are indeed like the ‘matchstalk men and matchstalk cats and dogs’ that I remember children singing about in my youth. Humanity is represented by little emaciated speckled archetypes, often scurrying around in droves near the citadels of northern capitalism, the industrial factory. The people appear as miniature figurines to highlight the backdrop as in an industrial Canaletto view of Venice. The people are all like dots of insignificance: working-class cyphers, their lives dedicated to the service of their paymasters.

If you wander away from the totemic works there are, not as famous but more precise, evocations of workingclass existence. A drunken brawl, a funeral congregation in black, the Sunday best for the big occasion: dour. The celebration of shortened lives in rank conditions. These paintings are stark but full of empathy, observed calmly and with rational detachment, as indeed are some of his portraits, and he is a remarkable portrait painter, though I had not realised it.

Separately, some weeks ago on a visit to Dublin I spoke to a friend, the librarian in the IFI bookstore, an oasis of modern civilisation in an ever-bleaker city. We conversed and he intimated to me that he had read a recent article by me in the Dublin Review of Books, where I noted the need for a new Orwell to chronicle how the poor die in our nefarious third-world state. No, he firmly intimated, we need not Orwell but that great chronicler of American depression-era working-class life, Upton Sinclair. In Sinclair’s most famous book ‘The Jungle’ he demonstrated sub-standard conditions of workers in the Chicago meat-packing industry and many of his works including ‘Oil’, which became the film ‘There Will be Blood’, are attacks on unbridled, greedy capitalism and what it does to the human spirit. 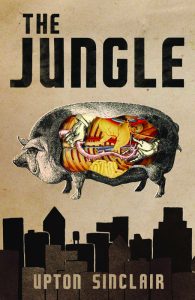 Lowry and Sinclair are ever more relevant as we return to the present. The Marxist analysis of dead capital sucking the blood of labour is more pertinent than ever. I know the tropes and nuances are different, and that the culture has shifted. I know with Marx that identifying the problem does not solve it but recognise the communist manifesto will not work.

The existence of the ordinary person in under-paid and over-worked corporatism is not unlike the heyday of Victorian capitalism, or indeed the Great Depression, with the modern version of the factory being the bleak buildings of financial services and corporate law firms. Death by overwork while serving the interest of the plutocracy has become banal in much of western society. Ordinary people console themselves often, as in a seminal painting of Lowry, in the consolations of booze, the Friday night out, the office party. Oblivion. Blowing the limited amounts of disposable income they have, which has not been hoovered up by inflated rents, and mortgages which may never be repaid.

Certainly in Ireland there is little or no ‘real’ economic growth as such. Those who have wealth and property run the country like a feudal oligarchy, abusing state structures to go after anyone that poses a threat to their interests. They often mask it well. But deep-seated criminality and thuggery are intrinsic to the modus operandi of our ruling classes and the tactics of surveillance, fabricated cases and false or political prosecutions endemic to a system descending into anarchy, where vested interests are using ever more desperate and ruthless tactics of human exploitation.

There is a pattern to all of this. As Arundhati Roy intimates in her monograph ‘Capitalism: A Ghost Story’, and her recent novel ‘The Ministry of Small Things’, the pattern is that globalised capitalism is ‘cartelising’ the world into a small number of people who control the wealth and assets, and enforce penury and degradation on the mass of the population who are deemed surplus to requirements.

That word “surplus” implies disposability by any means necessary. Thrown in a river, locked up in prison, shot. Exposers of the systemic corruption such as Roy in India have been jailed for their temerity in pointing out the growth of the rotten neoliberal agenda.

Lives are being destroyed or truncated and the lunatics of the corporatocracy and the insanely rich are pillaging the planet with a speed and rapacity never witnessed before. In their wake, they are destroying equality of opportunity and the ability of ordinary people to work themselves out of the poverty trap. It is not just the working class but all of us, including the educated middle class, who are suffering.

So, the working middle classes are confronted with longer working hours, increased competition and migration through neoliberalism – a wholesale race to the bottom.

As Roy demonstrates in her ‘Capitalism’ book droves of Indian farmers are committing suicide because of the punitive conditions imposed on them. Suicide rates are exorbitant for failed businessmen, lonely farmers and the homeless of Ireland. A ‘solution’ proffered by one court registrar was to put the children of a dispossessed family into care. The road to a new system of Magdalene Laundries would be short and straight.

Every human life is worthy of comfort, joy, love and development. That is both a Christian and a secularly appropriate agenda. All our little lives need protecting, as Sinclair and Lowry clearly saw. They, and we, are not specks of insignificance or objects of exploitation. Not matchstalk men and women.

All God’s children have three dimensions, and lives outside of work.