In the Bible, Emmanuel is the name of the Messiah, the one who comes to save men. How ironic to see that the man who appears to save France from a far-right cataclysm bears this name. With a second round win of 66,1% against Marine Le Pen, the economic liberal candidate Emmanuel Macron of En Marche! (EM) was elected as the eighth president of France’s Fifth Republic on May 7, succeeding François Hollande, for whom he had acted as special counsellor and Minister for the Economy.

However, France had never been so far from choosing someone to rule the country. Nearly half of those who voted Macron did so without supporting him.

As fifteen years ago, in the 2002 presidential election, when president Jacques Chirac faced Jean-Marie Le Pen, the French people were forced into the decision to unite against the far-right. But there was a big difference: in 2017, to see Marine Le Pen in the second round of the election wasn’t a surprise.

The National Front (FN), founded by Second World War collaborationists, made significant headway in the European and municipal elections in 2014, then in regional elections in 2015, and there have never been so many towns ruled by the party. Inside those towns, changes have begun: budget cuts for culture, for charity, and increases for security. One mayor even decided to re-arm local policemen.

Le Pen’s use of divisive and inflammatory language is dangerous. Perhaps prefiguring her loss she declared some days before the run-off election : “My voice was but the echo of the social violence that will explode in this country”. She was surly and dishonest in the second-round debate against Macron. TV viewers were afforded an unnerving opportunity to see how aggressive Le Pen was and how ill-versed she was on several subjects, including the monetary situation after a potential departure from EU.

Not so long ago a French journalist and his cameraman were attacked by security guards after trying to ask Marine le Pen a question over allegations her security guard was paid as a parliamentary aid. The EU’s corruption watchdog accused Le Pen of using €340,000 of European funds to carry out non-Parliamentary work for the National Front. Le Pen said she wouldn’t even attend before the Paris prosecutor dealing with the matter until the election is over. Though clearly the blame does not attach directly to Le Pen, it is significant that some – apparently Russian agency – saw fit to hack and leak Macron emails on the eve of the election, and that the FN was not outraged. It may be a foretaste of darker days for democracy. 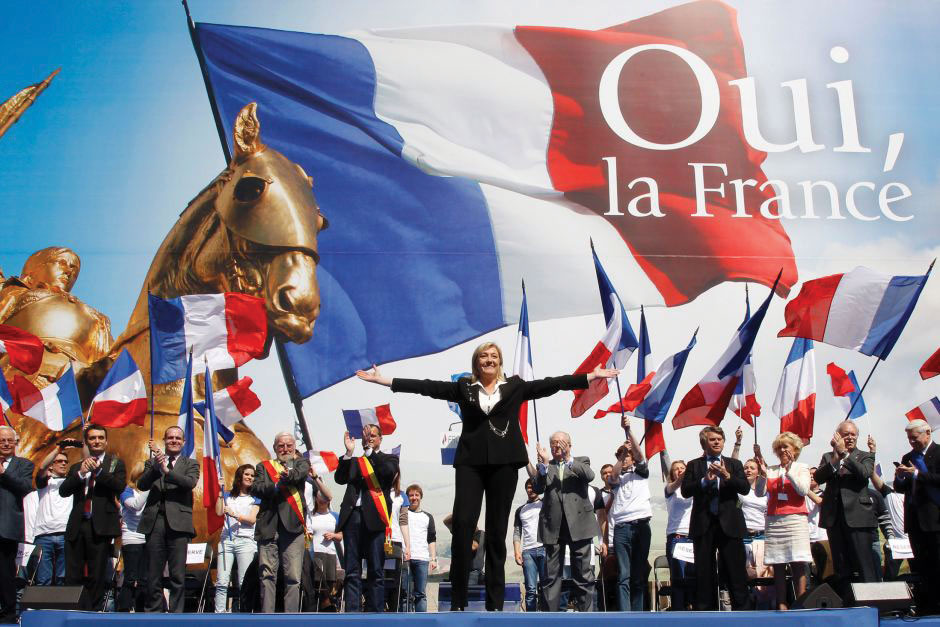 They were warned and still the FN got into the second round of a presidential election, ultimately gathering more than 20% of the voters. Jean-Marie had obtained 17% in the first round.

Spontaneous protests of tens of thousands of people erupted across the country the day after that vote took place. A week after the 2002 first round, a million French citizens took to the streets, turning traditional May Day workers’ rallies into anti-Le Pen protests. The far-right leader was then demolished in the second round – improving his share of the vote by less than one percentage point; this year, there were few convulsions and Marine Le Pen obtained around a third of the second-round vote.

In 2017 the explanations are less attractive.

People didn’t react, or not as much as for François Fillon, whose demise was probably largely because of ‘Penelopegate’, when he was accused of paying his wife for fictitious activities by French newspaper Le Canard Enchaîné. If Marine Le Pen had been elected on May 7, it would have been a political earthquake, but because French society changed its view on politics, at least as much as because of the actual result that symptomised it.

For the first time since the end of World War II, the results of this election broke France’s ancestral duellist politics. The country that invented the word ‘Left’ and ‘Right’ in politics, based on the position of the chairs in the Parliament after the Revolution, suddenly decided to blow away these two fragile notions. François Fillon, the candidate of the Républicains, was shot down by corruption allegations.

On the Left wing, Benoît Hamon’s victory in the primary elections of the Parti socialist (PS) against former Prime minister Manuel Valls was a surprise and he carried the hopes for disappointed lefties indignant at Hollande’s economic liberalism after he turned in 2014. His goal was to create “a desirable future” and “make France’s heart beat again” and he was the only candidate, with radical leftist Jean-Luc Mélenchon, to make the environment a central concern. But he got nowhere, when so many socialists, including Manuel Valls himself, decided to join Emmanuel Macron. The man who claimed to be “neither right nor left” finally killed and buried the left, or part of it. The PS have to face up to wholesale defections, and undoubtedly be torn apart during the next parliamentary elections in June.

Many were frightened to see the FN in the second round for the second time, but Emmanuel Macron, definitely saw this as a blessing from God. To face a far-right leader is a great opportunity in a country where a majority of voters will, where strategy requires it, vote for political opponents to defend the democratic values of a Republic. That explains the beaming face of Macron, when he addressed his supporters on the night of his first-round, even though his score was just two percentage points bigger than Le Pen’s (24% against 21.7%), and repaired with his celebrity mates to dine at La Rotonde.

It also explains how preoccupied Macron was when he knew that not all the losing candidates called their electors to vote for him. François Fillon and Benoît Hamon did, but Jean-Luc Mélenchon didn’t. Actually, he didn’t say anything and looked exhausted. In this election, his movement, La France Insoumise (FI) was perhaps the least cynical of the parties. First considered as a minor threat, Mélenchon gradually became one of the four pretenders to the second round. But when he became a threat he was assailed by media and politicians on his policies including a blurry attitude towards the Syrian conflict and Vladimir Putin.

The programme of La France Insoumise wasn’t written just by Jean-Luc Mélenchon and his gang. Nearly 500, 000 people were part of the movement and contributed to the programme called ‘L’Avenir en commun’ (‘The future in common’). After his disappointing fourth place with 19.5%, they sensibly gathered to decide what they would do. Many voters claimed they wouldn’t choose between Le Pen and Macron, even if, if all the FI voters decided not to vote, Marine Le Pen could be elected. Moreover, after the results of an internal FI poll showed that one third of them wouldn’t differentiate, they were accused of being potentially responsible for a Le Pen win. They ignored the fact that the FI managed to steal a lot of the potential FN electorate, in the first round. 30% of 18-24 youngsters voted Mélenchon, and 31% of the unemployed. This would otherwise have been fertile territory for Le Pen.

“Neither fascism, nor capitalism”

In 2002, French media rewrote the famous motto of May 1968: ‘élections, piège à cons’ (‘elections, a trap for dummies’) as ‘abstention, piège à cons’. 28.4% of people chose not to vote for the incumbent president Jacques Chirac, the incumbent socialist Prime minister Lionel Jospin or any of the fourteen other candidates. Non-voters were considered as unconscious dilettantes. In 2017, the same accusations were laid at those who said they wouldn’t vote for Le Pen or Macron. Because of the Law on Working conditions, which was enacted without a vote in the Parliament, because of Le Pen’s smugness after he won the first round and because they didn’t want to vote eternally just to insulate the body politic against toxicity rather than for their own ideologues.

“Neither Le Pen nor Macron”, and “Neither fascism, nor capitalism” were the mottos, and that’s why the May Day demonstration against the FN didn’t look like 2002.

The social media were abuzz with messages calling people names because they had said they wouldn’t vote for someone who would bury their working conditions. On the other hand, leftists accused Macron voters of selling themselves short through the centrist. The dilemma was great: how to guarantee Macron would win, because Le Pen would be a catastrophe, without over-elevating him. Macron seemed not to understand the issue: he called for a « support vote ». Finally, the big score helped unwilling voters. With more than 65% of voters, this is clearly not a support vote for Macron, and he actually gathered 44% of the French electoral population, considering a 25% of abstention. But the sum of people whose anxiety was great enough to do their electoral duty.

Unlike Chirac in 2002, also elected but not chosen, Macron must now build a real national union with forces from the left and the right. He will need to show that his ‘tough liberalism’ has appeal for the parliamentary élections in five weeks. Then he must prove that his “neither left nor right” stance can offer the healing, growth and reform that France craves in the face of high unemployment, fear of terrorism, social and racial antagonism and European Union remoteness. After his second-round victory, he said he wanted France’s new chapter to be one “of hope, and confidence rediscovered”. The aim is the right one, but it will not be easy.

Moreover, the question remains: how can we be sure that this situation – having to vote to avoid populism – will not recur every five years? Macron was elected, but building a majority in the Assemblée Nationale will be tough, even though he will count on alliances between the current social and conservative-liberal MPs. According to polls, more than 60% of French people don’t want him to get an absolute majority in the Parliament. However, France is not completely split into Macronists and LePenists. There’s something new on the left. Hamon and Mélenchon separated from the social-liberals and promoted fresh ideas. They may fare better in the forthcoming Parliamentary élections. A lot is left to play for.