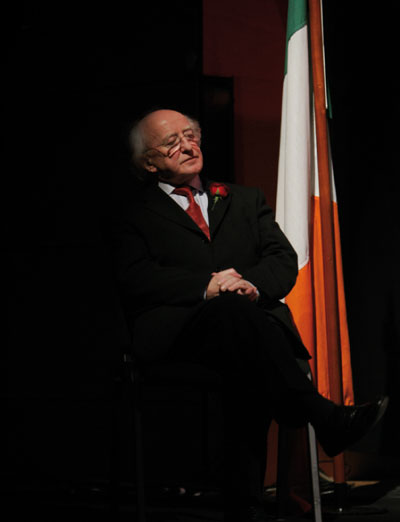 Michael D Higgins, veteran polymath TD for Galway West,  was born in Limerick in 1941. His father, a lifelong republican, had been sentenced to death by the Free State for blowing up Mallow Bridge, but reprieved, the Cork Examiner having called for his execution.  His father left his family and the very young Higgins who has written that while “there are images [of Limerick] which I retain, such as the pleasure of being brought up past Janesboro to the public park in Limerick, [that] memory  fades into insignificance when I consider the implications for all concerned of the leave-taking that was involved in the break-up of our family”. Raised in Newtown-Mount-Fergus, County Clare, from the age of 5 by an aunt and uncle,  Higgins  had  a nanny with an Anglo-Irish accent – trained in a Limerick ‘big house’, accounting perhaps for his unusual dialect, though not his intermittent shrillness. He was educated at St. Flannan’s College, Ennis, Co. Clare, University College, Galway, Indiana University and Manchester University. He is Married to Sabina Coyne, a founder member of the Focus Theatre and Stanislavsky Studio in Dublin. They have one daughter and three sons.

Higgins was active in Fianna Fáil as a student in UCG but in the end stood (unsuccessfully) for the Labour Party in the 1973 general election despite a fresh-faced Éamon Gilmore canvassing for him. A former member of Galway County Council (1974-1993), he has twice been Mayor of Galway. As Chairman of the Labour Party 1977-1987, he opposed coalitions with Fine Gael.  Higgins was a  member of Seanad Éireann 1973-1977 and 1982-1987 and was elected to Dáil Éireann in 1981 and 1982; and re-elected in 1987, 1989, 1992 and 1997.  In 1992 he thought of joining Democratic Left but stayed with Labour and became Minister for Arts, Culture and the Gaeltacht 1993 -1997.  Dessie O’Malley said he’d ‘go mad’ in a ministry but he didn’t quite. Indeed he is highly regarded in arts circles for his achievements in office.   Currently he is President of the Labour Party and Party Spokesperson on Foreign Affairs. He will not stand in the imminent general election as he has his sights, not for the first time, on the Presidency.  A straw poll in the Sunday Times showed an overwhelming preference in the parliamentary Labour Party for the intellectualised Higgins over his party rival, the more worldly Fergus Finlay.

HIs first collection of poems, ‘The Betrayal’, was published in 1990. His second book of poems ‘The Season of Fire’ was published in 1993.  The Irish Times’ reviewer wrote: “T]hough Higgins declares in one poem his dedication to “the blinding light/ Of the ordinary”, too many of the poems are damaged by his use of a language that doesn’t practise what he preaches. So even a poem of affecting memory can slide into a language that distances us from its experience, is clotted with abstractions”. A selection of his writing, speeches and academic work, ‘Causes for Concern’ was published in 2006. He is currently preparing a new academic work on political theory and practice, emphasising the necessity for an integrated approach and stressing the hegemony of values.

Michael D  Higgins has campaigned for human rights and written of conflict in many parts of the world, including such areas as Turkey, Western Sahara, Nicaragua, Chile, Gaza, The West Bank, Peru, El Salvador, Iraq and Somalia.. In recognition of his work for peace with justice, he became the first recipient of the Sean MacBride Peace Prize of the International Peace Bureau in Helsinki in 1992. He has been an active feminist for all of his political life. Former Labour leader, Frank Cluskey once was told, when he asked why Higgins was not at a party meeting, “he is in El Salvador”, prompting the response that when given the choice of saving the world or the Labour Party, Higgins always took the easy option. This reflects the party’s sometimes  testy, but always respectful, indulgence of a man sometimes seen as the conscience of a party that perpetually wrestles it  and wins.

What were your early political achievements and interests?

When I first stood for election in 1969, I was 28. I made a conscious decision at that time to bring in economic rights and social rights to the discourse I was developing.

I became a Senator in 1973 and I was very much involved in personal-rights issues, such as family planning. I recall the first attempt to abolish the status of illegitimacy.

Between ‘77 and ‘81, my work was quite internal within the Labour Party and I was out of electoral politics.
In ‘81, I was elected as a TD for Galway West and I won the seat on quite a left-wing agenda.

There were 3 elections in 18 months. In the first election in 1982, I surviveD But then in the second, I lost my seat. I had been targeted by the Christian Political Action movement. The other people who were targeted by that group in that election were Jim Kemmy and Mary Robinson.

How did your association with Central America begin?

In 1980, you had the shooting of Archbishop Romero in El Salvador. Éamon Casey was involved in Trócaire and I was invited to go to El Salvador.

And then I went to Nicaragua and it was then I began my long association with the Sandinistas.

That began a relationship with Central America that would develop. Much later, I was part of an international delegation which met with Senator Ted Kennedy. It was Kennedy who put down the motion in the US Congress which ended the formal US military intervention in Central America.

When I lost my seat, I ran at the last minute as a University Senator and was elected. During that period ‘82-‘87, I visited a great number of places in Africa and took an interest in food issues, indigenous production and cultural rights. I was interested in western development models and indigenous knowledge systems and so on.

In that period, you had the Reagan visit and I was one of the main speakers at the demonstrations. In ‘87, I won the seat back and I have been a TD since.

My relationship with human rights has not been an academic one. It has been quite practical. When I came back from Columbia a few weeks ago, I thought about what future exists for this society of terror, where can a space be carved out where the line of enlightenment might fall.

There is what I regard as an international terrorism of the financial markets, led by Goldman Sachs and others. I think the great moral failure has been inability to control multinational corporations, be it in extractive industries in South America or Africa or otherwise. In one place after another, the tax avoidance of these companies more than quadruples what is transferred in aid by governments.

And the kind of papers I have been responsible for, internally in the Labour Party, have drawn on things like the utopian tradition. I keep thinking about the world that is not yet born, the world that is there for emergence.

What are your achievements and failings as Arts Minister (1993-7)?

I was associated with the ending of Section 31, which was a censorship issue, the founding of Teilifís Na Gaeilge and the refunding of the film industry. I was also involved in promoting public access to arts. I never saw the arts as residual but rather as a crucial part of the human experience – social rather than personal.

In 1996, I was president of the council of cultural ministers in Europe. That was when Europe had veered to the right and we witnessed privatisation of the means of communication and concentration of ownership in the media. It’s the beginning of the period of Berlusconi in Italy. You have Germany abandoning its own film industry in favour of dubbing American product.

There was criticism for expensive projects I was involved in as Minister. There was the question of buying Collins barracks which I did to save it from apartments. I moved the Chester Beatty Library to Dublin Castle. These were big expenditures, every penny of which I would justify today. Most of it was with European money. The issue was finding the 25% to match the 75% European funding.

Can you tell us something about your Father?

My poem ‘The Betrayal’ is about my father’s death in what was then called a poorhouse. He was a republican and spent the civil war in prison.

He was in the Cork number 2 brigade and was the intelligence office for the batallion. His brothers were also in the war of independence but were on the other side in the civil war. But my father couldn’t get a job after coming out of the civil war experience. Before, he had 150 pounds a year as a commercial traveller. When he came out, no one would hire him and he started as  a Junior in Newbridge County Kildare at 50 pounds a year, live in. He then later built up to renting a pub and then owing a pub.

Tell me about “the betrayed Republic” of your poem ‘The Betrayal’.

People like my father made a conscious decision in relation to the freedom, sovereignty and independence of this country. But what emerges from history when it is looked at critically is that most of the people who had been in the war of independence who were in the battalions were second  sons. They weren’t the inheriting son of the farm. There was over- representation of the people in the trades, people who worked in bars and groceries; and apprentices.

When you look back,  you can see that the new state  is one that continues a kind of a colonial character in the institutions The people who sale into UCD to become professors are very conservative people. They have their own moral reasons for setting up something that is Irish and Catholic and Conservative.

Once the state has been established, you can quickly change over and bring in censorship laws, censor books. You have a kind of authoritarian oppression. These are the elements of a betrayed Republic.

What of your next venture, the Presidency?

What I actually feel in relation to my next venture is that an enormous price has been paid for anti-intellectualism, which has closed out political theory, the best scholarship and celebration of the imagination.

My personal journey –  a person making their way from the most humble of beginnings – is not a journey of escape. However unsuccessful, it is an attempt at engagement.

And my next project, in relation to the Presidency is entirely about that. It is about engaging with what I see as the incredible loss of trust and alienation. I think it is important to give witness to the possibilities and the positive alternatives that come from original thinking, the power of collective action and the strength of community.

You have a responsibility if you believe in something strongly to listen and then communicate effectively and that is what I have been trying to do. That is really what I feel at this stage. That is how I can best use this period of my life.