The Jobstown trial has inspired a lot of commentary on both the power of social media to influence outcomes, and the credibility (or lack of same) of ‘mainstream’ media.

Perhaps predictably, most of the commentary seemed to reinforce already existing viewpoints. Social-media users sympathetic to the protestors and their cause were more likely to regard legacy media titles as hopelessly compromised, while journalists in general even before the trial viewed social media – and social-media campaigns – with suspicion. In other words, each side viewed reality through a filter bubble based on their existing prejudices.

So it was that the Reuters Institute Digital News Report 2017, including a survey of the Irish media landscape, comes at just the right time to put some of these claims and counter-claims in context.

The survey finds that 46% of respondents in Ireland trust “most of the news most of the time”, down four percent on last year, though the figure rises to 52% for “news I use”, suggesting that most correspondents rate their own news judgement in deciding which news to consume above that of the population at large. Both these figures place Ireland pretty much in the middle internationally. Out of 36 countries surveyed, the country places 14th on overall trust of news, and 16th for “news I use”. 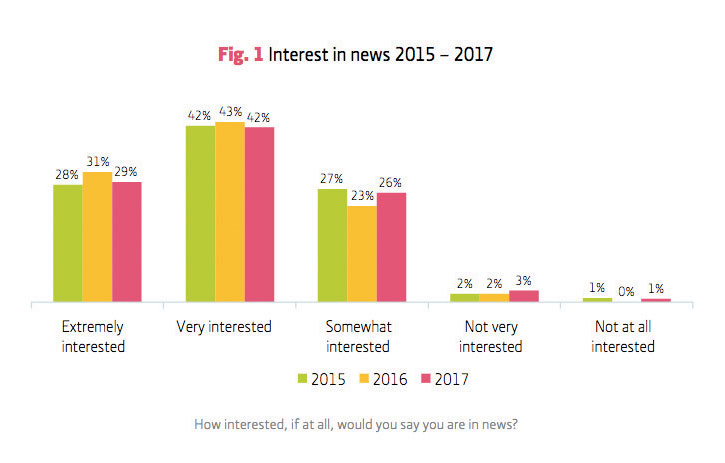 Overall, Irish users are more trusting of (or have more confidence in) their traditional media news sources than the international average, 46% to 41%. And while trust has fallen in the last year, it has not fallen as steeply as in our near neighbours in the UK. Concerns about ‘fake news’ and partisan coverage of events such as Brexit and the Trump election campaign may have been concerning when it came to international news but so far, while there may be concerns about the impartiality of some local news outlets, none has ever shown the “see no evil, hear no evil, speak no evil” blind partisanship of a Fox News or Russia Today magazine show.

The same national versus international pattern holds when it comes to social media. Although social media are less trusted than legacy media for their ability to sort fact from fiction, at 28% of those surveyed, this is still higher than internationally, where just under a quarter (24%) trust social media.

Facebook continues to dominate social media news, with 41% of Irish Facebook users finding news through the social network (compared to 47% internationally). Twitter and Snapchat both outperform international norms in Ireland, but despite its popularity with journalists and media types generally, only 11% of Irish Twitter users are getting news from the network. Dissatisfaction with traditional news sources is often amplified in new social media, but despite this, social media clearly have their own credibility issues. But despite audience scepticism, old-media outlets continue to be the primary news sources for most people. RTÉ dominates the field in Ireland, with 62% getting their news there once weekly or more often. This should not be too surprising, given that RTÉ has multiple channels, with both television and radio output. Sky (34%) has only television, in contrast, and the BBC (30%) radio channels don’t really penetrate into the Irish market.

Additionally, 31% of those surveyed get news from the RTÉ News website, just 1% behind online news outlet TheJournal.ie, at 32%. The Independent online website is a close third at 30%, while the Irish Times, next in line, lies back at 23%. These differences among the leading online news sources may be a product of different paywall and registration strategies, from the most open (the Journal) to the least (Irish Times).

Timing is everything, and Ireland may be lucky that its jolt to the system came a few years ago. The Jobstown trial is to a large extent an artefact of the Irish Water protests, which are receding from current affairs into history. From Brexit fallout to the ongoing housing/homelessness crisis becoming a full-blown catastrophe, there’s no guarantee there won’t be another shock to the system in the next few years, but so far Ireland seems to have been spared the kind of existential problems a high-profile Trump or Le Pen can take advantage of, and the resulting loss of faith in news media.

Instead, as shown in the Reuters Digital News Ireland report prepared by Paul McNamara, Kevin Cunningham, Eileen Culloty and Jane Suiter at the Institute for Future Media and Journalism (FuJo) at Dublin City University (DCU), Ireland’s media problems revolve around the more prosaic issues of ageing audiences and reluctance to pay for news.

One reason for the relatively high trust in news in Ireland may be a figure which describes participants’ political leanings. Two thirds (67%) described themselves as Centre, compared to 19% Left and 14% Right. Decades of consensus politics on the major issues, from national wage agreements to EU membership to Northern Ireland have presumably had an impact in creating the impression among many that their views are part of the moderate middle, whatever an objective outside assessment might be. By contrast, countries with highly polarised polities, such as the USA, Italy, and Hungary, show low levels of trust in news sources.

Perhaps related to this, the age differences when it comes to trust in media are notable. Only one in three 18-24 year-olds and 25-34 year- olds (33% and 34% respectively) agree with the statement “I think you can trust most news most of the time”, a number which rises steadily as participants get older, to 43% of 35-44 year-olds, 53% of 45-54 year-olds, and 56% among those over the age of 55.  The reluctance of younger consumers to pay for news may not be a function simply of their familiarity with obtaining free news using modern technologies, but the level of trust they place in it. What should you pay for news you cannot trust? It is also worth considering how much worse those numbers might look for legacy media sources if it had not been for the ‘safety valve’ of emigration. Around 75,000 people have emigrated each year since 2008, and emigration tends to skew towards younger people.

When it comes to news consumption, Ireland looks pretty much like its international competition, with the exception of RTÉ. The national broadcaster exercises a huge dominance, described at the primary news source by two-thirds of consumers, compared to 49% internationally, and an equally impressive score among online news sources through its website, as mentioned previously. Again, the older the news audience, the better RTÉ does, while younger audiences are more likely to go for online news sources such as the Journal, Her/Joe.ie, or the websites of the Irish Independent, BBC News or Today FM.

Willingness to pay for online news continues to rise, and is now at ten percent, up from seven percent just two years ago. This may be due to a local ‘Trump bump’, as the American election result is credited with increased subscriptions to paid-for news which is perceived as more trustworthy, or it could also be a result of increased familiarity with paid news options, as the Irish Times hardens its paywalls, the Sunday Times/Times Ireland Edition expands its offering, and new products from the Dublin Inquirer to the Second Captains podcast are developed which consumers decide they are willing to pay to support.

Even better news comes when willingness to pay for news online is broken down by age. The most likely to pay for news are those aged 25- 34 at 13%, with 18-24s (12%) and 35-44% (11%) also in double figures. This is good news for news outlets losing these audiences for their print products, even if the associated advertising revenues from online audiences cannot match those lost in print.

“I was offered a good deal” is cited as the number one reason for paying for an online news product by Irish consumers, at 32%, significantly higher than the 23% internationally. This may be a legacy of the Times Ireland Edition campaign which offered subscribers who took out a yearly subscription a “free” iPad, effectively worth close to the price of the subscription. It remains to be seen how many of these customers the Times Ireland can retain. “It was cheaper than paying for offline access” (23% versus 16%) also scored higher than internationally, as did “I want to help journalism” (18% versus 13%). This suggests that there are two distinct paying news customers, one seeking value for money, the other “quality” news. Other ‘quality’ related statements about reasons for paying (“I like to consume news from a variety of sources”, 16% versus 29%; “news you pay for is better than free news”, 11% versus 16%) scored lower in Ireland than internationally, suggesting value for money will remain an important consideration for news outlets in designing their pricing plans. Likewise, the number one reason to not pay for news remains “I can get online news for free”, at 53%. Freedom comes with many definitions.