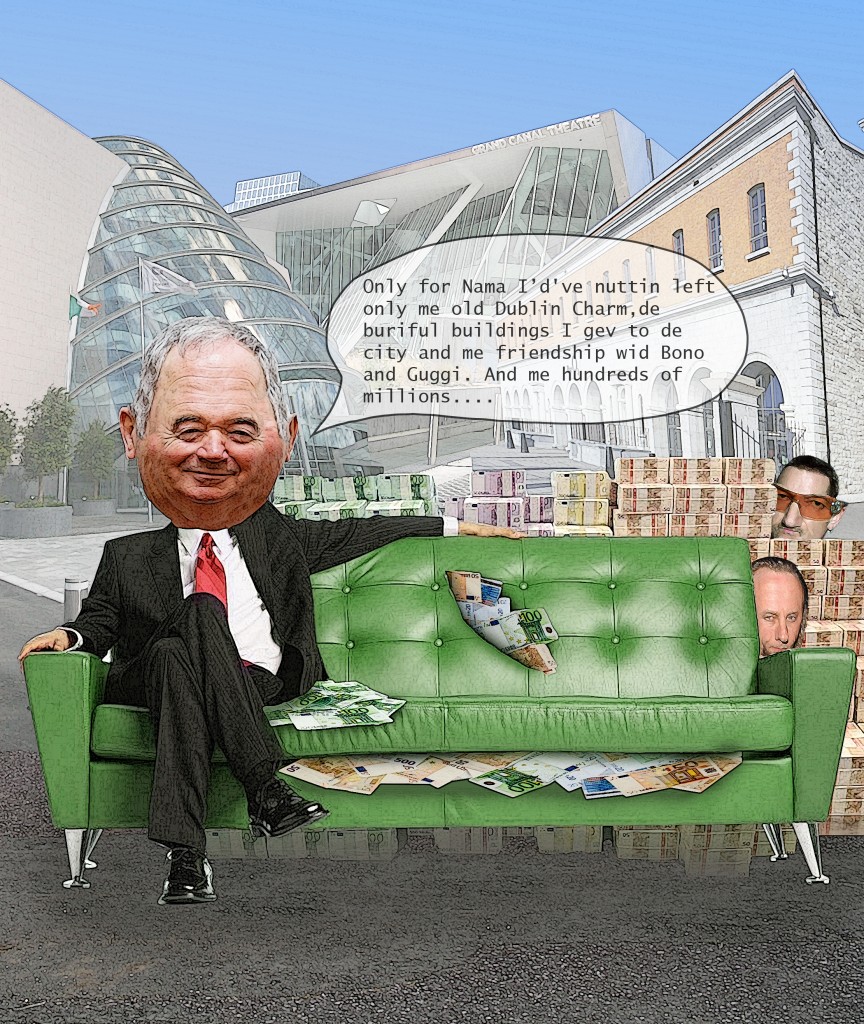 [Archive, October 2011]
Gary Fitzgerald on how and why the public interest has been hijacked.

From 1995 until 2007 Ireland experienced one of the largest asset-price bubbles in the history of the world. We are now living with the fallout: negative equity and huge personal indebtedness. Recently there have been growing calls for a personal-debt forgiveness-scheme. However, the decisions taken by the Irish State in response to the end of the property bubble make it very unlikely that any such scheme will be implemented.
When the bubble burst in 2007, the first part of the Irish economic system to feel the pressure was the banks. Almost every bank in the State had loaned large sums of money to developers, secured on land. As long as land kept going up in value then everything was fine. But once the inevitable happened and land fell in value almost every Irish bank either became insolvent or flirted with insolvency. The government’s response was to save the banks at all costs. It may be that this was as a result of an order from the European Central Bank (ECB), but the decision was taken by the government. The bank guarantee of 2008 turned private banking debt into public debt. It tied the banks and the State together.
Following quickly after the guarantee came the National Assets Management Agency (NAMA). NAMA was to take distressed property loans of the major developers off the banks’ balance books at a discount and work those loans out over time. For example, let’s suppose that Mr Builder owed Bank of Ireland €100 million. NAMA bought that loan from the bank at a discount of 70% – and then stepped in to the shoes of the bank. The bank got €30 million in cash and had to make provision for €70 million in bad debts. NAMA was then supposed to recover as much of the €100 million as possible from the developer. The impression was given in 2009 that NAMA would be aggressive in pursuing this money. But now NAMA acknowledges that it will only look for the discounted value of the loan. In other words it has finally, in the teeth of earlier protestations from Brian Lenihan, become clear that Mr Builder has had his €100 million loan reduced to €30 million.
Why then can a similar scheme not be put in place for people with smaller debts to the bank? If some of the richest citizens in the State can have taxpayers’ money used to reduce their debt, why not the ordinary citizen? The answer is simple, because the State cannot afford to do both. Back in 2008 and 2009 it was clear that the banks faced two problems. The first was bad debts on loans to developers. As a result NAMA bought €72 billion worth of loans for €30 billion. The banks booked a €42 billion loss and many had to be recapitalised by the taxpayer as a result. The second was bad debts on loans to ordinary borrowers. According to the Central Bank personal debt in Ireland is over €390 billion, of which mortgages account for just over €109 billion.
Both of these problems were clearly identified by the banks, politicians and the media. Yet the government chose to save the banks and developers at enormous cost. Now even if there was a political will to introduce a personal-debt forgiveness-scheme, the money is not there to do it. Once the banks start writing down personal debt to any significant level, they become insolvent again. This would require a further injection of capital by the State, resulting in higher taxes and cuts in public expenditure. With the State on the brink of insolvency itself, it is simply not in a position to do this.
Is there another way that the State can assist those in debt? Debt can be eliminated in one of three ways. Either it can be forgiven, or it can be paid back, or inflation can reduce the real cost of the debt. Since we are members of the Euro, we don’t have the economic tools available to control our inflation rate. In any case government policy is to drive costs and prices down to make Ireland more competitive. This “internal devaluation” will worsen the problem of personal indebtedness, making it harder for those struggling to pay down debts incurred during the boom.
Neither the banks nor the State can afford debt-forgiveness. Government policy is to deflate the economy and individual borrowers can’t repay the debt. What then does the future hold? What are the consequences of the State’s decision to protect the banks and developers and ignore the plight of the ordinary citizen? There is no simple answer to this, but it is clear that the future is bleak. Without personal debt-forgiveness there will be a large section of society who will feel betrayed by the State, who will have no incentive to participate in the State and who will have no economic future in the State. This may lead to a level of social disunity that Western Europe has not witnessed since the late 1920s. The acts of the Fianna Fail/Green coalition and now the Fine Gael/Labour coalition are nothing more than a betrayal of the ordinary citizen and the consequences could be terrible.